The World Junior Championships – an audition for the Olympics

There will be more than medals at stake during the World Juniors in Buffalo later this month. The NHL’s decision to stop their players from participating in the Olympics in South Korea in February has opened an unexpected door for European prospects to experience the biggest stage international hockey has to offer. For at least a few players, the WJC could be considered an audition for an Olympic roster spot.

On a very talented and intriguing Finnish WJC team, there are several players that could be considered to be in the mix for the Olympics. The two most prominent candidates among those are actually only 18 years old. Defenseman Miro Heiskanen (HIFK), Dallas’ 3rd overall pick in last summer’s entry draft, and Eeli Tolvanen (Jokerit), chosen 30th overall by Nashville, have both enjoyed great success this fall and both played with Finland at the Karjala Tournament in Helsinki in November. Heiskanen has nine goals and 13 points in 19 Liiga games while Tolvanen has lit up the KHL with 17 goals in 38 games.

While these two should make the team, defenseman Olli Juolevi is more of an outsider. The 19 year-old, who was picked 5th overall by the Vancouver Canucks in the 2016 draft, has had a strong start to the season after being loaned to TPS Turku by the Canucks. In 20 games, he has collected 14 points (5+9), but is still a long shot to make the Olympic roster due to his lack of experience among men on the international scene. Head coach Lauri Marjamäki will probably only bring one of the younger defenders to South Korea and Heiskanen seems to have a leg up on Juolevi.

On the Swedish WJC roster, there’s also two rather strong candidates to make the team as well as an outsider. The one player everyone talks about is obviously the projected first overall pick in nest summer’s draft, defenseman Rasmus Dahlin. The 17 year-old phenomenon made his debut with Tre Kronor last season, when he was dressed in two exhibition games against Belarus. That made him the third youngest player in Swedish hockey historia to don the yellow and blue jersey. This season, he played two out of the three games in the Karjala Tournament, drawing praise from head coach Rikard Grönborg afterwards. Dahlin and Vancouver Canucks’ first rounder Elias Pettersson, who leads the SHL in scoring with 35 points in 26 games, are players that Grönborg  scout in Buffalo.
“Are they in contention? Yes”, Grönborg told Swedish website hockeysverige.se last week. “The World Juniors is a great tournament where they’ll face off against really good international competition. Of course it matters how they play there, but we’ve also seen what they are capable of before the tournament.”

The outsider in the Swedish discussion is Lias Andersson, the 7th overall pick of the New York Rangers in June. He had a rough start to the season after being assigned back to Frölunda of the SHL when Rangers’ training camp ended. But after sitting out the U20 tournament in Russia in November, his game has flourished. He has ten points in his last ten SHL games. Could he make the team? It has to be considered a long shot, but he’s one of the players Rikard Grönborg will keep a close eye on in Buffalo.

Neither Russia or the Czech Republic have any clear cut candidates to make the leap from the WJC to the Olympics. Neither do Switzerland after Nico Hischier’s fast track to NHL stardom with the New Jersey Devils this season. Team USA might have a few up and coming college players in contention, but will likely rely on the veterans that a currently competing in European leagues. The same goes for Team Canada.

Still, it’s very likely we’ll see at least a few prospects go from WJC action to battling in South Korea one month later. Despite the NHL’s absence, it’s still quite the achievement. 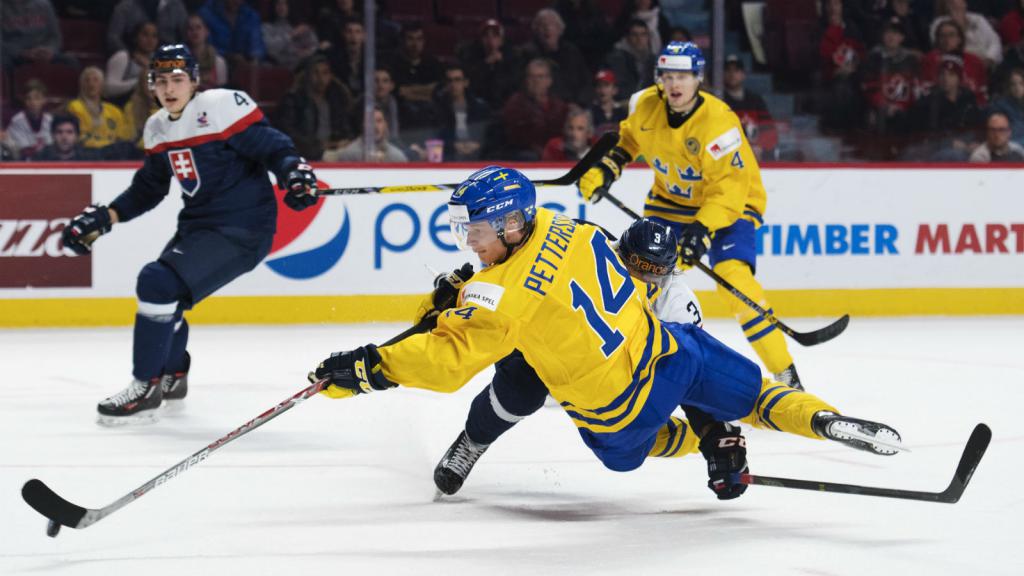