The call him “The Hunter” – meet the Caps’ rising prospect

He will never be mistaken for an offensive superstar, but Axel Jonsson Fjällby has attributes that appeal to the masses. Selected 147th overall by the Washington Capitals in the 2016 NHL entry draft, he was a long shot to make the NHL. But after making some nice progress with Djurgården of the Swedish Hockey League this season, the winger has certainly given the Caps and their fanbase something to be excited about. Both in the SHL and during Sweden’s two first games against Belarus and the Czech Republic at the World Juniors.

With his Carl Hagelin type of speed, ferocious forechecking and long locks, Jonsson Fjällby became an instant fan favorite with Djurgården this fall. Playing on an energy line with the Davidsson brothers, Marcus and Jonathan, he has made his mark in the SHL, scoring four goals and adding four assist in 25 contests. It’s his work ethic and youthful exuberance that has earned him the monicker “Jägaren” – “The Hunter” in English.

It was given to him by Djurgården’s coach Robert Ohlsson during an interview. Although the nickname is supposed to be a tribute to his speed and forechecking skills, the player himself is not too fond of it.
“Robert called me ‘The Hunter’ and then all the players on the team started to use it. It became more of a way to taunt me”, he explains. “I guess it was meant in a flattering way, but I still don’t like it…”

But why not, it sounds like a tribute?
“Probably ’cause it’s just to taunt more than anything else, but I guess I will have to invent nick names for the other guys and give them a hard time about it”, he says with wry smile.

His team- and linemate with both Djurgården and the Swedish U20 team, Marcus Davidsson, confirms that Axel Jonsson Fjällby is not overly excited when they chirp him about “The Hunter” moniker.
“I don’t think he feels it’s an appropriate name, but I think it’s fun when he gets upset about it. It’s fun when you can poke fun at him”, Davidsson says.

What about the hair? The long locks that dance on the edge of his helmet as he’s bursting up the ice kind of make him look like a rock star.
“A rock star!?”
Jonsson Fjällby looks surprised at the notion, but changes his mind midway through the sentence.
“Well maybe, I guess. But it just doesn’t look very good when I’m on the ice.”

No?
“To be honest with you, I don’t feel it’s a good look when I wear my helmet. When I’m not playing, I have a man bun and I like that look. I think that looks good.”

Why not use a ponytail when you’re playing then?
“No, no, no… That would make it even worse”, he exclaims. “As long as my hair is dry, it looks okey, but as soon as it gets wet from the sweat, it looks too long. Look at (teammate and Philadelphia Flyers prospect David) Bernhardt, his length is perfect. He’s got that Erik Karlsson flow going.”

Axel Jonsson Fjällby started to grow his hair long when he was 16. He cuts it every now and then, but only on the edges. He confirms that the locks help him with the ladies.
“(Laughter) Well, you know… It’s much better now than when I had short hair, that’s for sure. Back then, I didn’t do to well”, he says.

On the ice, he’s also making his presence known. His skating-ability and penalty-killing skills have been on full display during the first two games at the World Juniors in Buffalo. The strong season he has had in Sweden has given him a lot of self-confidence.
“All summer long, I was looking forward to the season because I knew what I was capable of. It felt like this was the time for me to prove that”, he says. “I haven’t scored too much, but the coaches have shown a lot of confidence in me and given me a lot of ice-time.”

Buffalo Sabres’ prospect Marcus Davidsson, who scored the first Swedish goal against the Czech Republic after a nice set up by Jonsson Fjällby, has played with his friend since the early junior days in Djurgården. He thinks that his teammates’ improved strength is the biggest difference in his game.
“He’s only getting faster and faster, and I think a lot of that has to do with the progress he has made in the gym”, Davidsson says. “Now he’s strong enough to stand up against anyone in the SHL. That’s a very important quality to have. I’m very impressed with what he has accomplished this far.”

And it could still get better. After missing out on a medal for the past three World Junior Championships, Sweden is one of several teams that have a shot at the gold. Winning the first two games has certainly helped them get a good position moving towards the medal rounds.
“Beating the Czech Republic was really important considering that they beat the Russians”, Axel Jonsson Fjällby notes. “We’re in a good position to win the group and that would mean a lot going forward.” 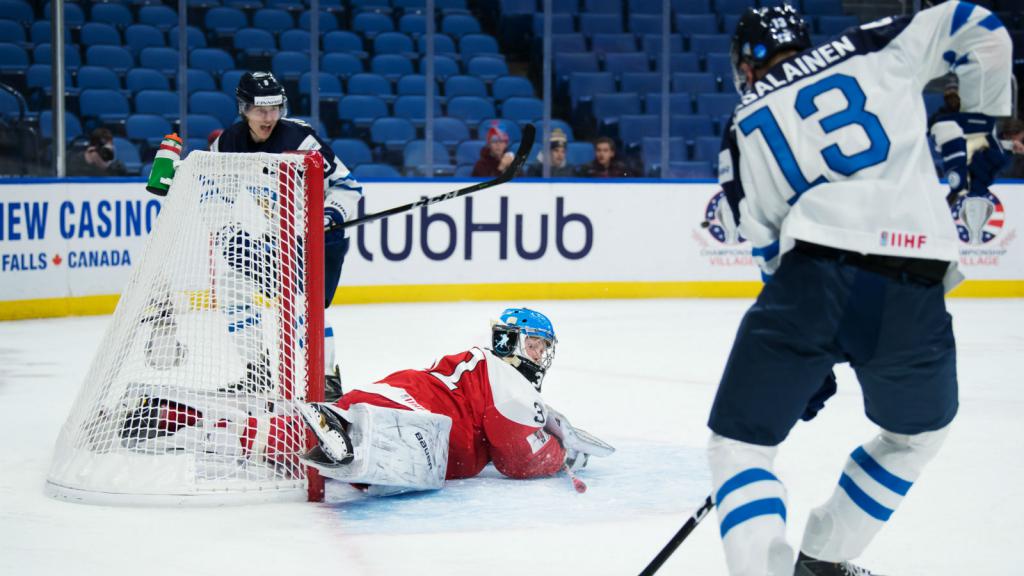