In arguably the tournament’s most back-and-forth game, Czech Republic managed their second victory of the tournament. Belarus scored on their first shot on the power play, and managed five goals despite hitting the net just 21 times over sixty minutes. Belarus actually held a 2-0 lead early through the second period, but five straight Czech goals past goaltender Andrei Grishenko pushed the lead in the other direction to 5-2. Belarus would push the score to both 5-4 and 6-5, but ended their 2017 round robin unable to get a point and face the likely foe of Denmark in the relegation round.

Sweden came through with their highest single-game goal output to date of the tournament with a dominant performance over the beleaguered Swiss roster. Though a Swedish own goal by Linus Hogberg made it 1-1 midway through the first, the Tre Kronor would rally for six of the game’s next seven goals including four in the third period. Rangers prospect Lias Andersson and Canucks prospect Elias Pettersson each scored twice in the win. Sweden faces Russia in the final game of the round robin on New Year’s Eve.

Though there was no scoring through 20 minutes during this game, Finland was able to come away with the multi-goal victory in a tightly matched afternoon contest. Samuel Bucek’s third-period marker for Slovakia made it 3-2 for Finland with just under 11 minutes remaining, but late goals by Markus Nurmi and Joni Ikonen just 15 seconds apart sealed the three-goal win for the Finnish team. Finland heads into their final group A matchup one point ahead of the host Americans for second in the group, while Slovakia needs a Finnish victory and a win of their own against Denmark to end up third.

Despite losing in the shootout to the United States the day before, Canada was able to complete their round robin performance with a fairly easy victory over Denmark. Carter Hart had an 18-save shutout, Brett Howden scored twice and six other Canadian players picked up a goal in what was a routine win for the Canadian side. Heading into the tournament’s final round robin day without a game on the schedule, Canada awaits a quarterfinal matchup with either Switzerland or Czech Republic based on the day’s results.

Making a strong case for MVP, Pettersson added another pair of highlight reel goals for his third and fourth markers of the tournament, while adding an assist on Lias Andersson’s opening goal. Tied for the tournament lead in scoring with Casey Mittelstadt, Pettersson continued to exhibit the skill that had him drafted fifth overall in 2017 by Vancouver.

WHAT A GOAL by Elias Pettersson! #Canucks pic.twitter.com/Nk4nszpSRJ

Second Star: Lias Andersson (SWE)
The other Swedish forward to hit a pair of goals on Saturday, the Rangers prospect hit the net twice for Sweden’s first and third tallies of the day. Now with four goals through just three games, Andersson is tied with Pettersson and the USA’s Kieffer Bellows for the tournament goal scoring lead.

lias andersson from alex nylander and the swedes have their 5000th powerplay goal of the tournament pic.twitter.com/vugXSl6n0R

Though it didn’t result in a victory, Belarus’ Yegor Sharangovich managed a pair of power play markers to help his team’s push against the Czechs. An undrafted 19-year old centre, Sharangovich is the only Belarusian player to finish the round robin stage of the tournament with two or more goals.

Yegor Sharangovich gives Belarus a 1-0 lead over the Czech Republic with a quick snipe on the power play. #WorldJuniors pic.twitter.com/zuWVAKbX78 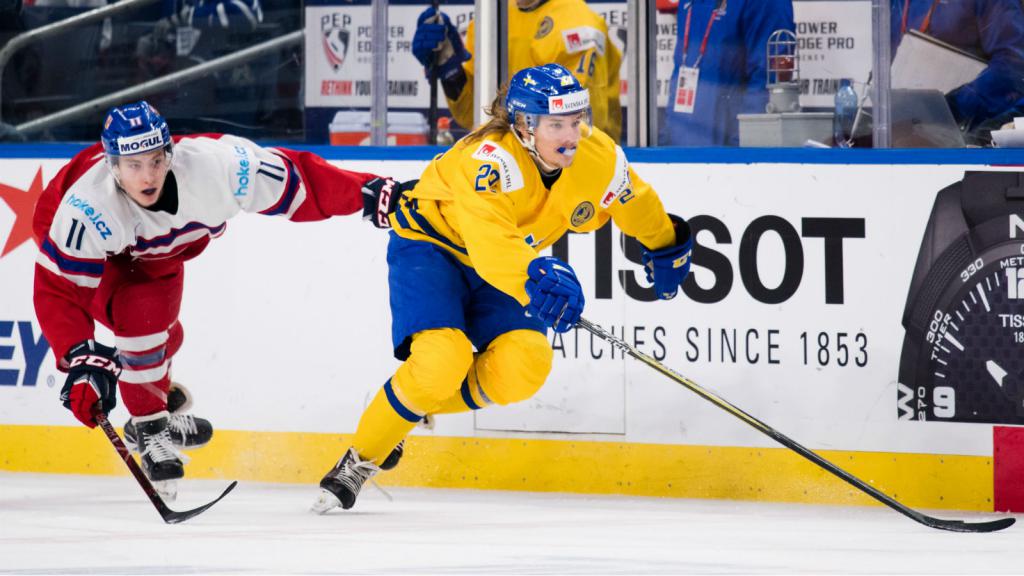