The opening game of the quarterfinal round pits together two teams both looking at an uphill battle to come out of the tournament with a medal. Czech Republic played with fire to finish second in their group, with a pair of one-goal victories over Russia and Belarus. They’ve seen five players play at a point-per-game pace, led by forwards Martin Necas (Carolina, 2017 1st round), Martin Kaut (2018 draft eligible) and defenceman Libor Hajek (Tampa Bay, 2016 2nd round), who have all picked up six points so far. Czech Republic hasn’t advanced to the semifinal stage since 2005, where they picked up a bronze medal at the tournament in Grand Forks, North Dakota.

Finland’s looking to avenge last year’s tournament performance, where they fell 2-1 to Czech Republic in the preliminary round before finishing a surprising fifth in group A. They’re led by a strong defensive group including Olli Juolevi (Vancouver, 2016 1st round) and Miro Heiskanen (Dallas, 2017 1st round), allowing just 102 shots on goal over their four games of the tournament. Jokerit forward and top U20 KHL scorer Eeli Tolvanen (Nashville, 2017 1st round) leads the team in scoring with five points, picked up by four assists and a goal.

On paper, this would have to be the most lopsided of the four quarterfinal matchups.

Last year’s silver medallists and a perennial contender, Canada’s only loss came in against the Americans on December 29th, falling in a shootout. There haven’t been any particularly dominant performances, as no player ranks in the top ten in scoring, but their deep lineup has seen 13 different players – 12 forwards and defenceman Cale Makar all score at least one goal so far in the tournament.

Switzerland’s only victory came in a 3-2 win over Belarus on the second day of the tournament.

Swiss head coach Christian Wohlwend said in a postgame press conference Sunday, “They’re faster, they’re bigger, they’re stronger, they can shoot better, they can pass better, they can do everything better,” in regards to Canada. In a pre-tournament game, Canada thumped Switzerland by an 8-1 score.

As Canada finished with both the most goals scored (21) and fewest allowed (6) in their four games, it would be the tournament’s biggest upset if the Swiss were able to pull out a victory.

Matched up against arguably the tournament’s best team to date, Slovakia is looking to play spoiler for the second time in the tournament.

Sweden once again finished first in their group, winning all four of their games, including a 4-3 shootout win on Sunday over the Russians. Projected 2018 first overall pick Rasmus Dahlin has yet to score in the tournament, but he’s picked up six assists, and taken eighteen shots on goal while playing 30 shifts or more in each of Sweden’s four games. Forwards Lias Andersson (New York Rangers, 2017 1st round) and Elias Pettersson (Vancouver, 2017 1st round) have kickstarted the Swedish offence, picking up five and four goals respectively. Andersson remains a question mark, however, since he was hurt during the game against Russia.

Slovakia was able to squeak out a win against the Americans, but a losses to Finland and Canada pushed them to third in the group. Undrafted 19-year forward Samuel Bucek leads the team in scoring with three goals and three assists, but it’s not the deepest scoring group as just four of their forwards have been able to register a goal so far. Half of their offensive output from the tournament (ten goals) came in Sunday’s 5-1 victory over Denmark. To win, they’ll need another strong performance from undrafted goaltender Roman Durny, who leads tournament starters with a .930 save percentage in his three starts.

Traditionally two of the tournament’s strongest teams, the day’s last quarterfinal will feature two teams that have met in the medal rounds in each of the last four tournaments.

Despite beating the top-ranked Canadians in the World Juniors’ first ever outdoor game, a loss to Slovakia on the third day of the event forced the hosts to settle for second place in group A. Casey Mittelstadt’s (2017, Buffalo 1st round) been USA’s top scorer with nine points (four goals, five assists), while Kieffer Bellows (New York Islanders, 2016 1st round) has also hit the net four times to sit tied for second in tournament goal scoring.

While Russia was able to handle Switzerland and Belarus with ease, they suffered one-goal losses to Czech Republic and Sweden (in a shootout) in their first and last games of the tournament and finished third in group B. They’ve been led so far by Klim Kostin (St Louis, 2017 1st round) who’s picked up four goals, and Artur Kayumov (Chicago, 2016 2nd round), who’s scored three times. Meanwhile, Andrei Svechnikov, who’s ranked #2 by most major scouting services for the 2018 draft, has picked up five assists through four games.

This article is about:
Uncategorized World Juniors 2018
Scoring Leaders 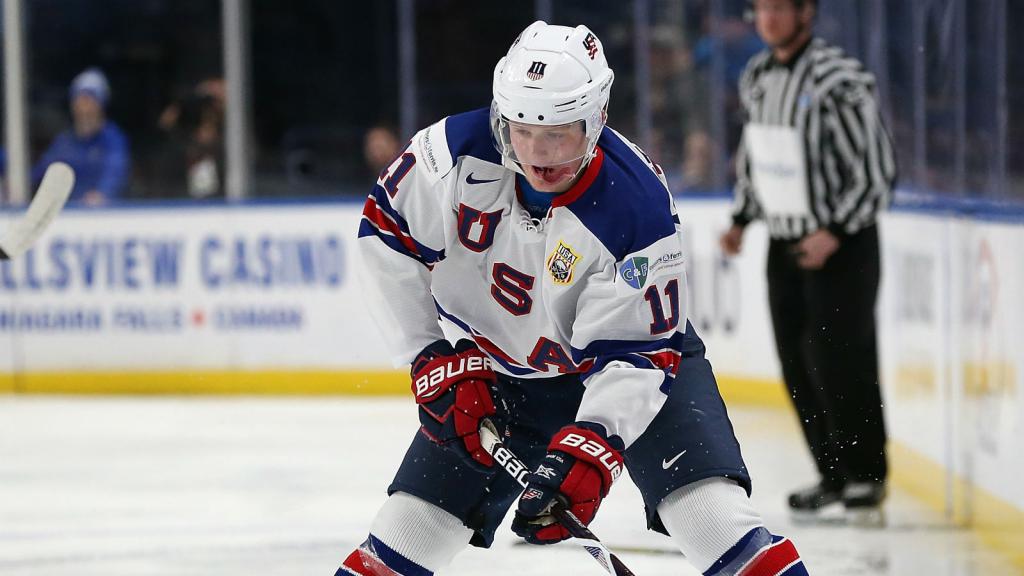