The first quarterfinal game on Day 8 was arguably the best of the bunch. The Czechs battled back from two different one-goal deficits including a game-tying goal with under three minutes to go in the third period. The Finns dominated the shot clock, peppering 51 shots on net, but Josef Korenar put up an excellent performance to keep the Czechs alive. The two teams then went into a shootout that the Czechs would win after Korenar stoned Olli Juolevi in the fifth round.

The win will send the Czech republic to the semifinals for the first time since 2005 when they won bronze. On the other hand, the frustration for Finland continues. Last year, they ended up in the relegation round, and this year, they’ll be playing in a placement game. It’s certainly a disappointing result after winning gold in 2014 and 2016.

To nobody’s surprise, Canada rolled over Switzerland in the quarterfinal to book a ticket to the semifinals. They scored a goal under a minute into the game and didn’t take the foot off the gas, eventually giving themselves a 5-0 lead before the game was half finished. The Swiss managed to score two goals, but this game was all Canada, as they peppered 50 shots on goal and had seven different goal scorers.

This was a game that nobody expected to be so close, but Slovakia kept things tight in a difficult game against Sweden. The Swedes grabbed a 2-0 lead early in the second period, but Slovakia battled back and brought it to within one before the end of the period. In the third, Isac Lundeström made it 3-1, but the Slovaks battled back to make it 3-2 with Martin Bodák’s second goal of the game. Ultimately, though, the Swedes were able to slam the door to book a ticket to the semifinal. They’ll have an opportunity to advance to the gold medal game for the first time since losing to Finland in 2014.

The United States and Russia matched up in a heated quarterfinal game in which the loser would have their tournament finished much earlier than anticipated. Kieffer Bellows got things going early to give the United States a lead, then Marsel Sholokhov and Kailer Yamamoto exchanged goals to send the Americans into the second period with a 2-1 lead. Early in the third, Russia tied the game, but Bellows buried the game winner with seven minutes to go. The Americans got 40 shots on goal to Russia’s 29 and were clearly the better team, but the Russians had a gritty effort and didn’t make life easy on the Americans.

They’ll play Sweden in the semifinal on their pursuit of winning a World Juniors gold on home soil for the first time in the program’s history.

An easy choice for first star honours, Korenar stole the game for Finland in the quarterfinal with a 51-save performance. Even after his 51 saves in regulation and overtime, Korenar was excellent in the shootout, stopping four of five Finland chances. He now has a .922 save percentage for the tournament in four appearances.

The United States faced a difficult task against a pesky Russian team in the quarterfinals, but Kieffer Bellows played arguably his best game of the tournament to help push the Americans over the top. He scored two goals, the game-opener and the game-winner, good enough for second star honours. He now leads the tournament with six goals.

Though it wasn’t at all surprising that Canada hammered Switzerland in the quarterfinal, Brett Howden deserves third star honours for a breakout performance. Howden had a huge game, racking up a goal and three assists, which more than doubled his tournament output. One of Canada’s best strengths is their offensive depth, and Howden displayed that yesterday. 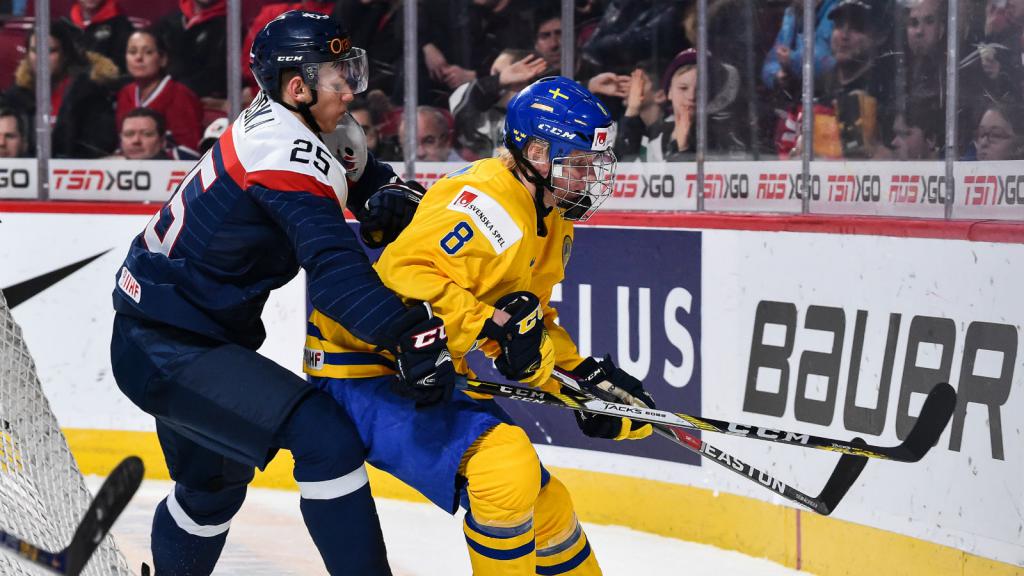 Next article WJC 2018 Quarterfinal Preview – here are the match-ups