In the footsteps of the Sedins – Dahlén and Pettersson dream big

Elias Pettersson was awarded the 2018 Elite Prospects Award as the most prominent junior player in the SHL earlier this week. As we handed out the award to the Vancouver Canucks prospect, we also took the opportunity to sit down and talk to him and fellow Canucks’ forward Jonathan Dahlén. Here’s a translation of the interview, done by Ronnie Rönnkvist in Sundsvall, Sweden, originally published in Swedish on our sister site hockeysverige.se.

Elias Pettersson and Jonathan Dahlén.
Here are the two most talked about Swedes in Vancouver at the moment. Heck, maybe even the two most talked about players for that matter. Ever since Daniel and Henrik Sedin let it be known that their distinguished careers were over, a lot of the future hope of the Vancouver Canucks have been placed on this duo, only 19 and 20 years of age.

It would obviously be unfair to put pressure on these youngsters to perform at the same level as two future hall of famers, but you’ve got to admit that their potential is exciting. Especially after a season where both players took great leaps in their development.

The two first got to play together during the 2014/15 season after Dahlén had moved to Timrå from HV71. And there was instant chemistry between them on Timrå’s junior teams.
“The first time we were put together was after Christmas 2014. He was promoted to our team and put up insane numbers. We played together and did really well”, Dahlén remembers.

Pettersson had four goals and 13 points in six games and complemented Dahlén really nicely on the team’s top line.
“We both make fast decisions and want to play in the offensive end of the ice. We think the game in a similar way… Most times, at least”, Pettersson says with a wry smile.

Dahlén:
“I like to find openings and go there and it’s a bit more fun to play that way when you have someone who can put the puck on your tape.”

Pettersson:
“Yeah, I guess you can say that we have to different styles, but think the same way.”

NOT PERCEIVED AS A DUO ANYMORE

This season they proved that they can play good hockey away from one another as well. Elias Pettersson lit up the SHL during his first (and only) season with Växjö, winning the scoring title in both the regular season and the playoffs. Dahlén bounced back after a bout with mono during Vancouver Canucks’ rookie camp and led Timrå to a promotion to the SHL after five years down in Hockeyallsvenskan, the second-tier league in Sweden .
“I think it was good for the both of us to get away from that a bit”, Dahlén says about constantly being referred to as a duo. “Elias did a really good job in Växjö and when I came back to Timrå, I proved I could play without him as well. It was good for us to get that confirmation. Not only to show people what we can do by ourselves, but also to prove it to ourselves.”

The comparisons to the Sedins is something that they’ve had to listen to ever since Pettersson was drafted by the Canucks last summer. At this point, they can joke about it to although it’s an obvious honor.
“They say that we are ‘the new Sedins’. No pressure…”, Pettersson says while bursting into laughter. “I don’t know if we can create that kind of chemistry right now, but if we do, I’ll take that any day of the week.”

Dahlén:
“We obviously play well together because our styles complement each other. If we get to play together as long as the Sedins did, it would be great.”

“SOMETHING I COULDN’T REALLY IMAGINE”

Pettersson’s season was as close to perfect as you could imagine. He won the Swedish championship title with Växjö while capturing gold with Team Sweden at the World Championships in Denmark. Dahlén, on his part, was the big star while Timrå qualified for the SHL.
“I look at my season like… Not unreal, but something that I couldn’t really imagine when I started to work out with Växjö last summer”, Pettersson says. “That Timrå got promoted was also huge for me. I couldn’t have wished for anything more from that season.”

This year's recipient of our own #eliteprospectsaward is no other than Vancouver prospect Elias Pettersson. The annual award goes out to the best junior in the #SHL. Pettersson had an outstanding season in Sweden and is now ready to wow the #NHL audience! pic.twitter.com/lBUfqFo6K8

Dahlén:
“For a long time, my dream had been to get Timrå back into the SHL. It was pretty sick and unreal when it happened. I didn’t really anticipate that, even though we finished first overall in the regular season.”

How much did you follow each other during the season?
Pettersson:
“We knew what was going on. It obviously got a lot easier when Dahlén came back and play over here as I always follow Timrå.”

Dahlén:
“I’m not really that interested in the SHL, but it was fun to watch Elias in Växjö. They almost won every single game and scored a lot of goals.”

Jonathan, what did you feel about Elias’ success this season after making the move from Timrå to Växjö?
“It’s hard to say something that hasn’t already been said. It’s pretty unreal to do what he did. Not a lot of players have been able to do that at his age.”

“Neither did I”, Pettersson chimes in with a big smile on his face.

NOT AFRAID OF THE AHL

After their success in Sweden it’s time for both to leave their home soil to make a mark in Vancouver.
“We both want to play in the NHL as soon as possible and we have obviously talked a bit about playing together in Vancouver”, Pettersson says. “We don’t work out together during the summers, but we try to push each other. We’re both motivated by the possibility of cracking the line-up as soon as possible.”

Dahlén went to North America after his season in Sweden ended and played a few games with Canucks’ farm team Utica Comets in the American league.
“It was good for me to do that and get a feel of what it’s like. Just to feel that you’re able to play there. I’ve only played in Hockeyallsvenskan before, so it was good to get that confirmed, that I can compete there”, he says. “I don’t feel like it’s impossible to go directly from Hockeyallsvenskan to play in Vancouver. I’m going to do everything in my power to make that happen.”

And if you have to go to the AHL in the beginning?
“I haven’t even thought about that, I’ve only thought about the NHL”, Pettersson says. “Sure, it could happen that I don’t get to play in the NHL right from the start. If I don’t, life will still go on. There are players that weren’t even drafted that make it to the hall of fame. A career is long.”

Dahlén:
“I can’t count on playing for Vancouver (from the start). We’ll see what happens, but I’ll do everything I can in camp to get a crack at the NHL. If I get sent down, I’ll keep the same attitude down there, just work hard and try to get a call up as soon as possible.”

Do you hope to get a chance to play on the same line with the Canucks?
“Absolutely!”
The question is answered really fast by both of them.
Pettersson:
“I would love to do that!”
Dahlén:
“To go from playing alongside each other on Timrå’s U18 team to playing together in Vancouver would be a pretty awesome journey.”
Pettersson:
“Yeah, to first play with each other in Timrå and then have Jonathan be traded and then me be drafted by Vancouver so we would end up in the same NHL organization is pretty cool. Especially as we both have had the dream of playing in the NHL.”
Dahlén:
“I don’t think it’s a coincidence that I was traded from Ottawa to Vancouver in February and that they drafted Elias later that year. I don’t know, but it can’t be that big of a coincidence.”

Have you talked to Daniel and Henrik Sedin and received any advice that you can bring to Canada?
“You met them more than I have since you were there training last summer”, Pettersson says while looking at Dahlén. “I’ve only said hi, but I think I’ll get a chance to talk to them again once I get over there since they’ll be staying in Vancouver.”

Dahlén:
“I even met them before I got drafted. They actually asked me about Elias, about “that center from Timrå”. That was way before he was drafted. They are really the most humble people you can imagine and their careers were so sick. You really just sit there with big ears trying to absorb everything that they say.”

Pettersson:
“It’s really good that there are several Swedes over there on that team. It’s nice to be able to talk Swedish every now and then. We’ll see how close they (the Sedins) will be to the organization. Vancouver will probably want them around to help the younger players, but at the same team they might need a break from hockey. You never know.”

With files and photos from Ronnie Rönnkvist. 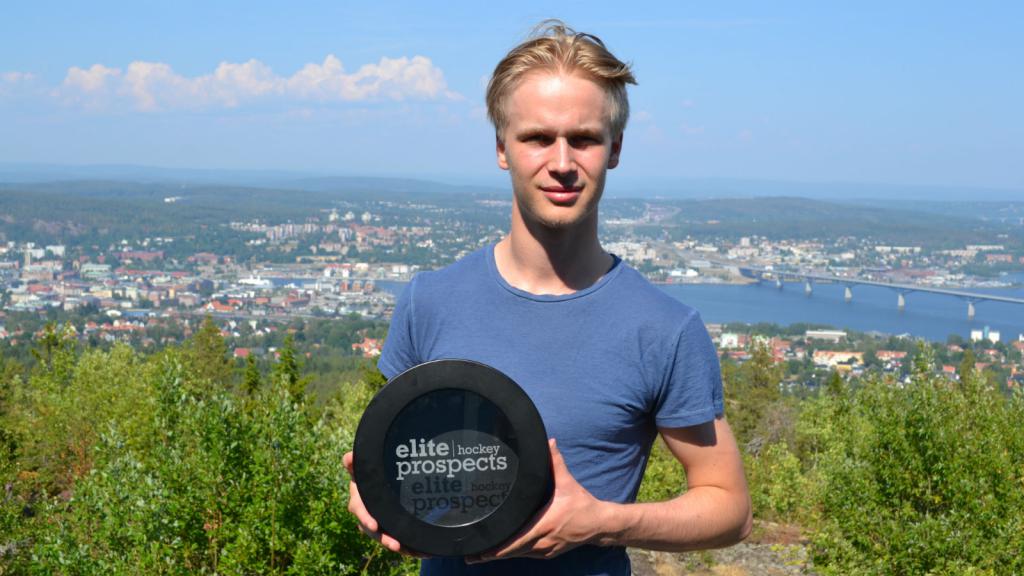 Next article And the winner is… Elias Pettersson