Welcome to the second installment of the Fantalyticacolumn. Every week, Fantalyticaprovides a granular, fantasy perspective about a group of prospects. Following last week’s analysis of Team WHL, we bring you Team OHL.

Potential Multiplier:  This metric is a complimentary accessory to the two main metrics we use to determine a prospect’s fantasy value. In simple terms, this metric is the different between the Age Adjusted Potential Value metric, and the Current Value metric. This provides two things: The amount of potential growth a player has, and how much the player has already grown. Players with a high Current Valueand a high Potential Multiplierare predicted to have the most successful fantasy careers. Players with a low Current Valueand a high Potential Multiplierare players deemed as ‘projects’, or rather, a player who has a lot of growing to do before his/her full potential is reached.

Team OHL is comprised of players who played in this year’s CIBC: Canada Russia series. The ages were taken on the day of the 2018 NHL draft. The algorithm applied these fantasy values for the analysis:

Now let us dive in the numbers and see exactly who one should keep an eye out for. 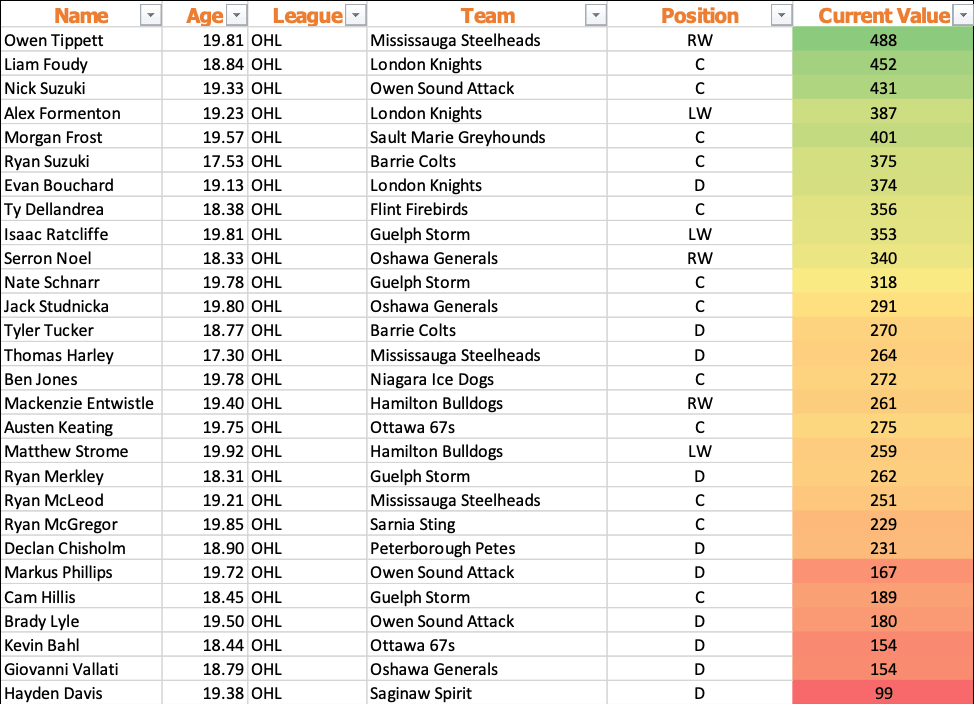 At the top of our list currently sits right-winger Owen Tippett, who has amassed 33 points in 22 games for the Mississauga Steelheads to date.  In our format which slightly favors Centers due to their ability to win draws, one should question why Tippett ranks as first on our list.  To me, the evidence suggests that the reason Tippett ranks first is due to his ability to get pucks on net as he currently he ranks fourth in the OHL with shots on goal.  If one were to try and predict Tippett’s future, one should expect the 2017 10th overall pick of the Florida Panthers to make an impact in the NHL at some point down the line.  This is not to say that he is going to streamline his way into the NHL, as he is going to have his work cut out for him as Florida is rather deep on forward – having Borgstrom and Heponiemi in the pipeline is going to create some healthy competition among the rookies moving forward.  However, if Tippett does not immediately make the NHL once his OHL career is over, do not sit back on this kid, his time in the AHL will only be seasoning as his skill and work ethic should create an inevitable stay in the NHL as a solid contributor.

Rounding out the top three are two centers.  Second is Liam Foudy, an average sized center drafted 18th overall by the Columbus Blue Jackets.  Looking at the Potential Multiplier (Figure 2), I say this with the most appreciation I can for the player, Foudy is only over a point per game in the OHL.  Yet, the reason why Foudy ranks so high is that given his age (in comparison, Tippett is a year older) one should only expect Foudy to develop and become an even more impact player than he already is.  One should be ecstatic if they have already drafted him, and if you haven’t, I suggest you try to make a move on this kid.  One thing working in your favor: he was taken late in the first round, which has potential owners weary of just how good this kid can be. If they have not seen our data, you must step up to the plate and lowball a current Foudy owner.  All signs point to this guy producing in the NHL. Try and snag him while you can and wait for it to pay off.  Third on our list is Nick Suzuki. A smaller-sized center, but shifty and able to process the game at an incredible pace, he was chosen by the Vegas Golden Knights at 13th overall in the 2017 NHL Draft.   This is Suzuki’s last year in the OHL and he has incredibly high potential to turn into a solid contributor in the NHL.  At worst he should peg in as a top 9 forward, which is all you can ask for in prospect, but if an owner is willing to sell low do not be afraid to pounce on him as his potential is well worth a risk.

Rounding out the top ten is Alex Formenton, Morgan Frost, Ryan Suzuki, Evan Bouchard, Ty Dellandrea, Isaac Ratcliffe and Serron Noel.  Frost has been dominating the OHL as he leads the league in points with 55 in 29 games.  To put that in comparison, Ratcliffe is the closest to Frost’s point totals with 33 in 27 games ranking 20th in league scoring.  What this means is that Frost has continued his development from being drafted and looks to be a solid contributor for Philadelphia in no more than a few years’ time.   Of all the prospects currently remaining in the top ten, the ones to keep close eyes on are Dellandrea and Bouchard.  Dellandrea has made the best of a bad situation in playing for a mismanaged Flint Firebird organization. However, Dellandrea has taken on a leadership role with the team and his play on the ice is just under a point per game, although is posting a minus 12.  What this says to me is that even when he gets scored on, Dellandrea will keep coming at you shift after shift.  Consequently, it was his work ethic and dedication to team play that landed him 13th overall in the 2018 Entry Draft by Dallas.  Dallas is thin among Centers and if Dellandrea can have a big summer and show he can play with the big boys come 2019 September training camp, Dellandrea can be an NHL contributor as early as next year.   If Dellandrea does not make the NHL, Bouchard does. I mean, the kid got his 9-game taste of the NHL already!  Bouchard is over a point per game in the OHL this year and figures to play a prominent role for Team Canada come the world juniors at the end of the month.  What makes Bouchard so appealing is that Edmonton lacks a defenseman able to dominate a power-play, and if Bouchard ends up developing into his projection (Krug, Seth Jones) then what you’re getting is a dominant fantasy point producing defenseman.

Figure 3 defines players deemed with the highest room for improvement. 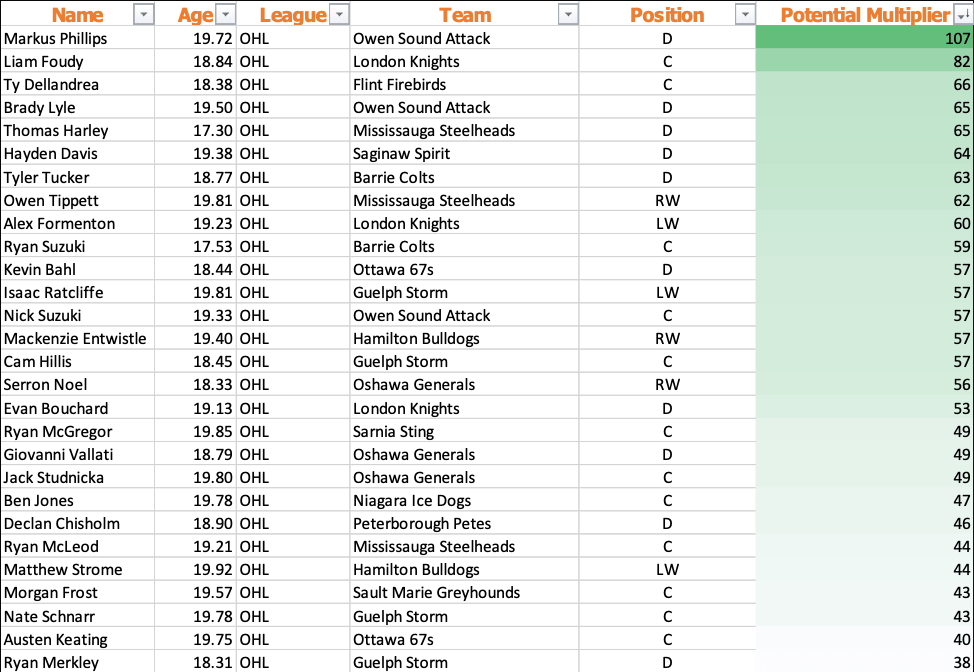 Looking at the remaining players the most intriguing name has got to be defenseman Markus Phillips of the Owen Sound.  The reason why Phillips catches the eye is due to his Potential Multiplieras it beats the next closest person by over 20 points.  Consequently, this means that if Phillips is given the proper attention, then he will develop into a very useful utility player in the NHL.  This is extremely important as fantasy entry drafts develop with players like Phillips falling in the standings.  If you can land such a player do not be afraid to do so and hold a roster spot in hoping he develops into an NHL player.

Figure 3 represents a heavier age-based metric. We see the same names towards the top. Players like Formenton, Schnarr, and Studnicka are all guys who fly under a dynasty league owner’s radar. Look to scoop players above 300; the likelihood of attaining an NHL career becomes much slimmer after Schnarr, but the risk is low and the reward surely warrants a flyer. 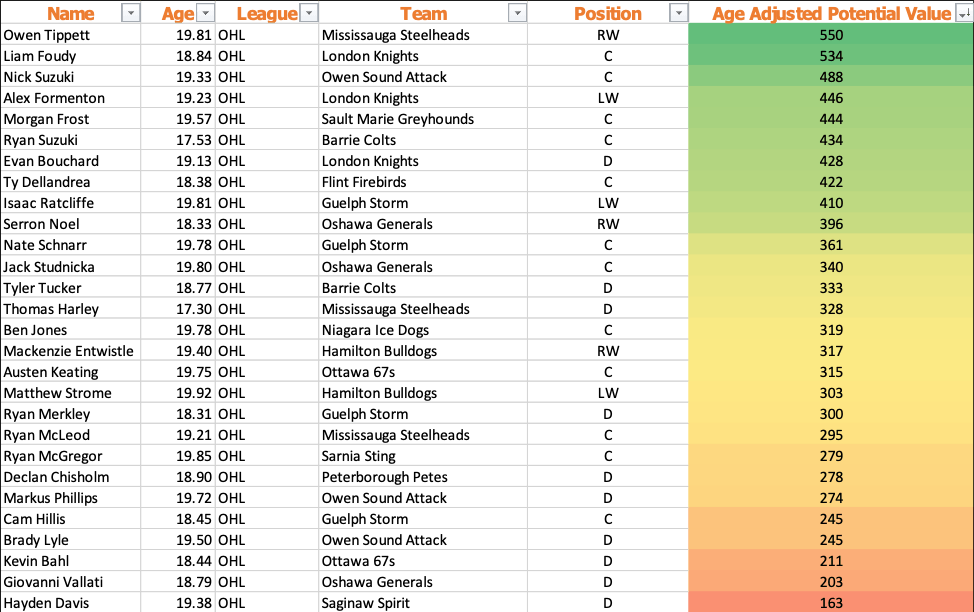 We hope you enjoyed this week’s column, which highlighted some of the brightest prospects playing in the OHL today.

To conclude this column, I’d like to remind you all that these are educated fantasy hockey projections and must be taken with a small grain of salt. Not every player from this year’s Team OHL will be NHLers. Historically speaking, many players from past Team OHLs have played in the NHL, but not all have reached the 200-game threshold.

Next week we will cover a Team QMJHL & Russia hybrid in preparation for the International WJC U20 tournament, which takes place later this month. 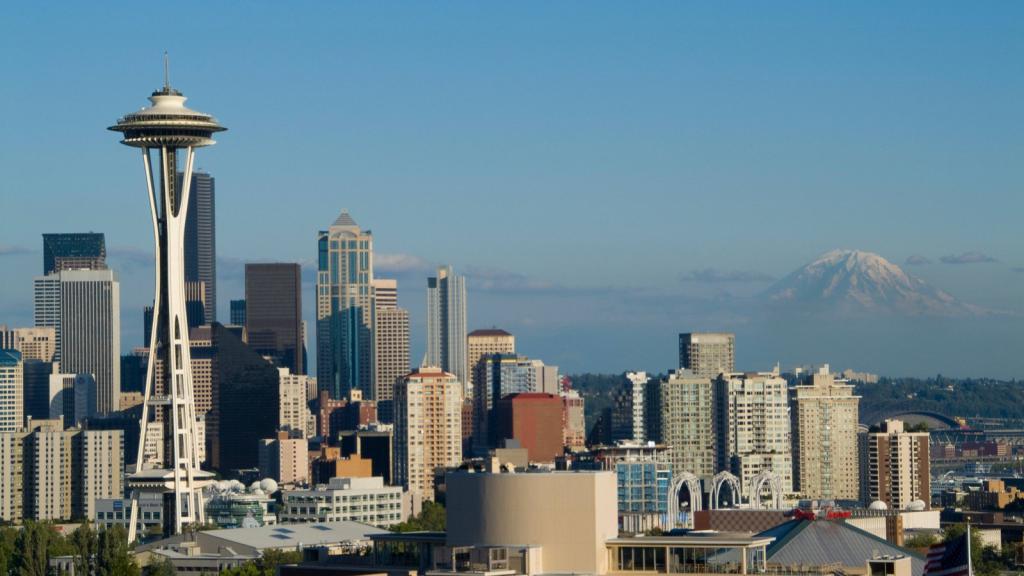