Starting this week and continuing each Tuesday, EP Rinkside will serve up a weekly AHL Top 10. This feature will focus on the leaders around the 31-team circuit with a look into their best prospects and their NHL-AHL player development picture.

The Checkers survived a tough five-game road trip that finished 3-2-0-0. Two of those came on late comebacks. Carolina continues to develop high-end talent in Charlotte. Forward Martin Necas won the CCM/AHL Player of the Week award after putting up seven assists in two games, including four this past Friday night against the Hartford Wolf Pack. Necas, 19, was selected by the Hurricanes 12th in the 2017 NHL Draft, and his 20 points (6-14-20) in 22 games leaves him in a tie for fourth place in AHL rookie scoring. He also is 1-1-2 in seven games for the Hurricanes. Now the Checkers get to camp out at home for six games. A pair of games against the Wolf Pack starts the homestand. The Checkers’ eight home dates are the fewest in the AHL so far, but they have gone 6-2-0-0. Goaltender Scott Darling is back with the Hurricanes.

Thanks to sweeping a home-and-home series with the Bakersfield Condors, the Barracuda own a five-game win streak. They put the Condors in a 3-0 hole within the opening four minutes of a 4-0 home win this past Sunday. An eight-game point streak has their .786 point percentage in the AHL lead. Forward Alex True has four goals in his past five games. The Barracuda goaltending tandem of Antoine Bibeau and Josef Korenar have the AHL’s top goals-against average (2.06) and save percentage (.929). Rourke Chartier has a six-game point streak (2-6-8). This week the Barracuda head to Southern California for visits to the San Diego Gulls on Saturday and Ontario Reign on Sunday.

The Amerks’ recent slight dip is no more after they swept the week with three wins in a row, including going into Syracuse this past Saturday night and shutting down the Crunch’s 13-game point streak on a 4-3 win. They also took out another hot team, the Providence Bruins, in a 2-1 home win a night earlier. Providence had come into the game on a 7-1-2-0 run. Number-one goaltender Scott Wedgewood remains on recall to the Sabres with Carter Hutton day-to-day. That leaves Rochester’s goaltending in the hands of Adam Wilcox and Jonas Johansson. Defenseman Matt Tennyson also remains with the Sabres. Forward Justin Bailey, who began the season without a goal in his first 11 games, has struck seven times in his past 12 contests, including twice against the P-Bruins. He is up to 7-6-13 in 23 games. They host the Binghamton Devils on Wednesday before starting a tough home-and-home weekend series with the Cleveland Monsters.

Iowa lost a pair of one-goal games in a two-game home set against the Chicago Wolves last week before closing out the week with a win. A 5-4 loss to the Wolves this past Friday ended Iowa’s franchise-record 10-game point streak, but the AHL Wild lead the Western Conference with 34 points. Rookie forward Dmitry Sokolov continues to impress added two goals for a 7-6-13 total through 17 games. Minnesota took him in the seventh round of the 2016 NHL Draft, but he piled up 50 goals last season in the OHL between the Sudbury Wolves and Barrie Colts. One challenge will be the loss of forward Luke Kunin, who was recalled by Minnesota on the weekend. The AHL Wild have a three-game road swing this week that starts Wednesday at the Texas Stars.

Before running into Rochester, the Crunch had walked all over Binghamton a night earlier on Syracuse ice, 5-0. Cory Conacher had his 12-game point streak (10-15-25) broken by the Amerks. He still holds a tie for second place in AHL scoring at 28 points (11-17-28) in only 17 games. Rookie forward Alex Barré-Boulet’s point streak still lives at 11 games (7-8-15), and he has moved into third in team scoring at 21 points. Thanks to second-year pro Connor Ingram in net, they have weathered the loss of Eddie Pasquale on recall to the Lightning. They have a three-game Canadian road trip this week. First up is a date with the Toronto Marlies on Wednesday before they bus to Laval to face the Rocket in back-to-back games on Friday night and Saturday afternoon. After that, the Crunch wrap up their five-game road trip with two more games away from Syracuse next week.

Tucson has gone on a 5-0-2-0 run, including three wins last week, that has the Roadrunners within two points of the Barracuda for the Pacific Division lead. Tucson has built a three-point gap on the Colorado Eagles. The teams start a critical two-game series in Tucson on Tuesday night. The lower-body injury to Coyotes goaltender Antti Raanta is something to keep an eye on from a Tucson standpoint after Arizona reported that it will be a long-term injury that could end his season. Adin Hill has been on recall to the Coyotes and taken on a heavy workload with Raanta out. Two more NHL recalls are Conor Garland and Michael Bunting, who are first and third in team scoring, respectively. After meeting the Eagles, the Roadrunner have a pair of weekend road games against the Wolves.

Charlotte is threatening to run away with the Atlantic Division, but the Sound Tigers have mostly taken care of business this season. The loss of forward Josh Ho-Sang on recall to the Islanders is a tough one for the Sound Tigers, but they did regain goaltender Christopher Gibson. Defenseman Devon Toews returning to the line-up would be a significant boost. He has missed five consecutive games due to an upper-body injury. He is 5-12-17 this season, leaving him a sixth-place tie among AHL defensemen. A three-in-three weekend stares down the Sound Tigers this week. It starts Friday on the road versus Providence before a hard battle with Springfield back on home ice the following night.

At long last the Avalanche appear to have a competitive AHL affiliate. Playing their first season in Colorado, the Avalanche affiliate has been excellent in their home building located only an hour north of Denver. Their just-completed six-game homestand produced 11 of 12 points. Forward A.J. Greer, whose 21 points (9-12-21) put him second in team scoring, was recalled by the Avalanche on Monday. Two Czechs have helped to lead the way for the Eagles. Goaltender Pavel Francouz continues to provide excellent work (12-4-1 | 2.62 | .920 in 19 games) while Avalanche 2018 first-rounder Martin Kaut is up to 5-7-12 in 23 games as a 19-year-old. Now we will say whether the Eagles can duplicate some of that same success away from home, starting with their two-game trip to Tucson. They visit Ontario this weekend and have a three-week stretch of eight of 10 games in opposing rinks. The Eagles are 3-5-1-0 on the road.

It was not an especially great weekend for the Thunderbirds, but they did finish it off by blowing out Binghamton, 5-1, at home this past Sunday. Springfield dropped the first two games of the weekend, including blowing a lead at home this past Saturday against Charlotte that led to an overtime loss. Forward Sergei Shumakov signed a professional tryout deal with the Thunderbirds after starting the season in the Washington Capitals organization, and he picked up a goal in playing two games this weekend. Michael Hutchinson is back in Springfield and provides elite goaltending. They have three games this week, starting with a date with the Wilkes-Barre/Scranton Penguins at home on Wednesday.

Grand Rapids had a nine-game point streak ended this past Saturday, but that run largely erased the damage done by a slow start. Defenseman Brian Lashoff returned to Grand Rapids from a recall with Detroit. The Griffins’ streak of 27 consecutive kills ended last week. They have a four-game week ahead of them.

The 32-year-old Oleksy had two assists for the Gulls in 15 games this season alongside 36 penalty minutes. He is a veteran of 388 AHL regular-season games (Bridgeport Sound Tigers, Hershey Bears, Wilkes-Barre/Scranton, Toronto, and San Diego) along with 73 regular season NHL games for the Pittsburgh Penguins and Washington Capitals.

Cracknell has played 498 AHL regular-season games and was expected to be a major part of the Toronto line-up after the parent Toronto Maple Leafs signed him as a free-agent this summer. He had 29 goals and 51 points (29-22-51) last season for the Hartford Wolf Pack and Laval Rocket, but he did not get on track this season in Toronto. At 33 years old, he has played 208 NHL regular-season games for the St. Louis Blues, Columbus Blue Jackets, Vancouver Canucks, Edmonton Oilers, Dallas Stars, and New York Rangers; he was only 3-7-10 in 14 games for the Marlies.

Glass is also 33 years old and slumped badly after signing an AHL deal with the Marlies. Toronto’s goaltending picture took a hit before the regular season when Calvin Pickard was lost to the Philadelphia Flyers on waivers. The other part of that planned tandem, Kasimir Kaskisuo, was injured on the second weekend of the season. Glass has played 193 AHL regular-season games, but he spent the majority of his career in the KHL. With Kaskisuo back along with Eamon McAdam, Glass had been pushed out of the goaltending rotation and not played since November 13th. 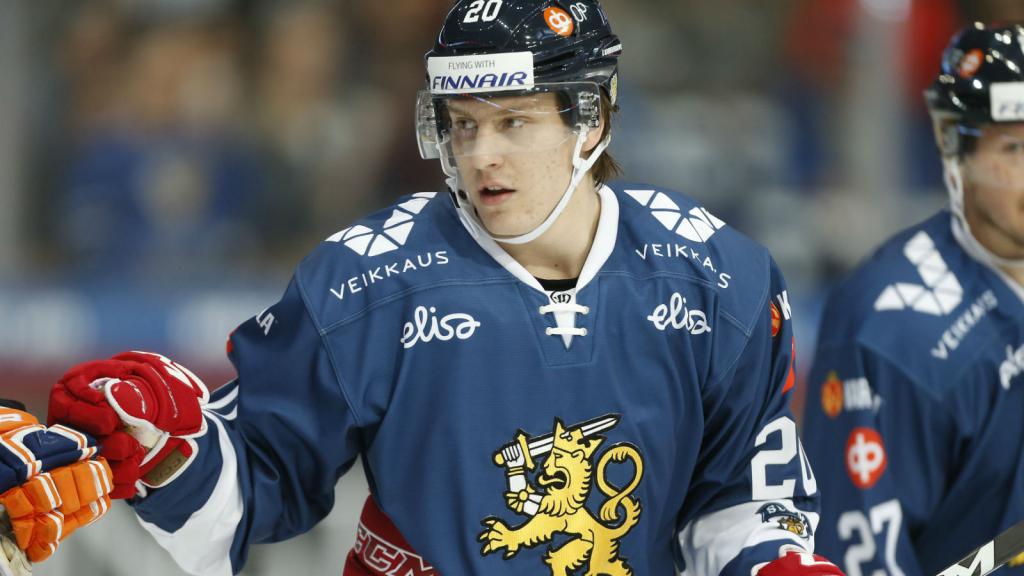