Each Tuesday, EP Rinkside serves up the weekly AHL Power Rankings, a look at some of the top contenders across the 31-team circuit and their NHL-AHL player development picture.

Another week, another batch of wins for a team that is threatening to pull away from the rest of the league before January’s arrival. After a solid 3-2-0-0 road trip, the Checkers headed south for a six-game homestand. So far, so good, as it is off to a 3-0-0-0 start, including a two-game sweep of the Atlantic Division counterpart Hartford Wolf Pack. On a six-game win streak, their homestand concludes this weekend with a two-game showdown against the Bridgeport Sound Tigers, who are second place in the Atlantic Division and at least still within striking distance of the Checkers. That Bridgeport twosome will take the Checkers into their holiday break before they undertake a six-game Canadian road trip. Goaltender Scott Darling, who has gone 3-1-0 in a pair of brief stints with Charlotte, again finds himself with the Checkers after being re-assigned this past Sunday. Charlotte also received forwards Janne Kuokkanen (11-16-27, good for sixth in AHL scoring) and Clark Bishop (3-2-5) in that haul.

Balance. Above all else, the Barracuda can direct a deep cast at Pacific Division opponents, something that should serve them well in the second half if their roster remains intact. Mix in excellent goaltending, and head coach Roy Sommer has another strong team on his hands. If the Barracuda can remedy their power play (ranked 25th), especially in the Pacific Division where the San Diego Gulls rank first in most penalty minutes per game while the Ontario Reign are fourth, that could be another major asset to deploy in those hard-nosed battles. The Barracuda took three of four points on a two-game trip to Southern California against the Gulls and Reign. Back-to-back home dates against the Tucson Roadrunners, who hold second place in the division, are on this weekend’s schedule.

A poor home performance against the Binghamton Devils notwithstanding, the Amerks had a very productive weekend. They took a sweep of their home-and-home series with a solid North Division opponent in the Cleveland Monsters. Number-one goaltender Scott Wedgewood can steal games when he is on, and he had a strong effort on the front end of the Cleveland series. Rochester has opened up a six-point advantage for first place in the division. A two-game home series against Hartford starts Friday night. With the Wolf Pack in an ongoing slump, Rochester has an opportunity to blow open the division going into the break.

Any skepticism about the Sound Tigers should just about be gone by now. Even with forward Josh Ho-Sang off to Long Island, the Sound Tigers swept a rather challenging weekend 3-in-3 that the AHL schedule presented to them. Third-year winger Michael Dal Colle’s blossoming this season shows no sign of slowing down, and his five goals last week earned him CCM/AHL Player of the Week honors. Christopher Gibson returned from the Islanders, played twice on the weekend, and took his first shutout of the season on 33 saves against the hot Wilkes-Barre/Scranton Penguins. That trip south to Charlotte is a chance to make a major statement and close ground.

Leaving a poor performance this past Saturday afternoon in Laval against the Rocket aside, it was a productive Canadian swing for the Crunch. They blew out the Toronto Marlies and won the first half of their pair of games in Laval. They are caught in a glut of teams in contention, but they hold games in hand on every other Eastern Conference team. Veteran Cory Conacher and rookie Alex Barré-Boulet continue to torment the AHL. Good health once again in the Tampa Bay crease has put the Crunch goaltending picture back in order with Connor Ingram and Eddie Pasquale both back in Syracuse. After a road stop against the Springfield Thunderbirds, they have a trip to see the Lehigh Valley Phantoms on Friday followed by a home contest against Wilkes-Barre/Scranton, hardly an easy way to go into the break.

As is their way, the Admirals quietly take care of business in the ultra-competitive Central Division. They grabbed five of six possible points while up against a tough schedule last week. That took them to a one-point edge on San Jose for the Western Conference points lead. Their workload is a bit lighter this week, starting with a road test at the Rockford IceHogs on Wednesday before hosting the red-hot Chicago Wolves on Saturday.

After managing a split against the visiting Colorado Eagles in a two-game series in Tucson, the Roadrunners ran directly into those Wolves over the weekend. The Wolves’ sweep left the Roadrunners with a 1-3-0-0 week going into a two-game trip to San Jose this weekend. Forward Nick Merkley’s return is a significant addition, however.

After splitting with Tucson, the Eagles went to Ontario and scratched out a 4-3 overtime win. Pavel Francouz’s stout work in net has been one of the quieter stories around the AHL, but he owns the Colorado net now. Two home games against the Bakersfield Condors lead into a challenging five-game post-break road trip.

The best that Iowa can say about last week is that it is over. Iowa took one of a possible six points on a Texas road trip that started with a 6-3 loss to the Texas Stars before back-to-back defeats – one of them in the shootout — to the San Antonio Rampage over the weekend. Consecutive home games against the tough Stockton Heat start Friday back in Des Moines.

Much like the week before, the Thunderbirds started their week with two losses before knocking out a weak team on home ice to finish the weekend. This time it was the Hershey Bears in a 4-1 win. Anthony Greco’s return from the Panthers is a major help. They play three times in four nights at home this week, all of them tough tests starting with the Crunch on Wednesday night.

Monday was one of those kind of days that occasionally hit an AHL team hard, and the Lehigh Valley Phantoms encountered an eventful start to their work week.

The Philadelphia Flyers’ ongoing turmoil has hit the Phantoms hard. Head coach Scott Gordon is off to Philadelphia to serve as interim head coach after the Flyers fired Dave Hakstol. And just as rookie goaltender Carter Hart had started to discover some pro success, the Flyers whisked him away to Philadelphia as well – return date, if any, unknown.

Assistant coach Kerry Huffman will take over as the interim head coach in Lehigh Valley, and Kjell Samuelsson will shift duties from developmental coach to join Huffman’s staff as an assistant. Alex Lyon returned to Lehigh Valley, so the Phantoms should be covered in net. Still, injuries to Brian Elliott and Anthony Stolarz in Philadelphia along with the unreliability of Michal Neuvirth leave the organizational depth chart at goaltender precarious at best.

Seventy-five minutes of highway separate the Phantoms and the Hershey Bears, and they might have something to commiserate about when they meet Wednesday night at Lehigh Valley.

Hard times have arrived in Hershey, home to what has been a top AHL success story for more than a decade.

After affiliating with the Washington Capitals in 2005, the AHL’s oldest franchise went on to send a crush of well-developed talent two hours south to Washington, win three Calder Cup championships in five seasons, reach the Calder Cup final two more times, and set attendance records. Hershey connections dotted the Capitals’ Stanley Cup championship team this past June. Going to Hershey revived Bruce Boudreau’s coaching career before he went on years of NHL success. Back in 2009-10, Hershey established new AHL season records in wins (60) and home victories (34) to go with 123 points, second-most in the AHL’s 83 seasons. That season ended with their second consecutive Calder Cup championship, the 11th in team history.

Really, other than a playoff miss in 2014, the Washington-Hershey connection had known very little besides success, a potent blend of top-flight player development, championship hockey, extended winning, deep playoff runs, and an overall consistency and elite standard nearly unheard of in the modern-day AHL.

Then the first real record scratch came last season when the Bears missed the postseason. Their 30-37-4-5 mark left them stuck last in the Atlantic Division, their first last-place divisional finish since 1983-84. That cost head coach Troy Mann, a key figure in preparing so much of that Washington-bound talent for years, his job. He headed off to the Belleville Senators to attempt to duplicate that success in the Ottawa Senators’ rebuild that is underway.

However, an extensive offseason roster overhaul, including an all-new coaching staff headed by promising Spencer Carbery, has not changed the Bears’ fortunes. They are 11-15-0-0, stuck in last place in the Atlantic Division.

Washington and Hershey each have been hit hard by blue-line injuries, and the Bears do not have nearly enough depth to counter them. Forward Sergei Shumakov, counted on to supply much-needed offense, left the team earlier this month (he then lasted all of five days and three games in Springfield before that tenure ended, leaving him without a team). Opportunities elsewhere have also cost the Bears defenseman Logan Pyett (off to the Liiga with KooKoo Kouvala) and forward Axel Jonsson Fjällby (back to the SHL to skate for Djurgårdens).

Yes, it is early, but their years of excellence means that a difficult season so far has put the Bears in extremely unfamiliar surroundings by comparison. Their .429 point percentage ranks last in the AHL. At 24 points, they are tied with the Manitoba Moose among 76-game-schedule teams for fewest points in the AHL (San Diego has 21 points, but the Gulls have played five fewer games and as a Pacific Division team are on an abbreviated 68-game schedule rather than the standard 76 games that the other three divisions play).

In fact, one has to go back more than 68 years to find similar struggles for the Bears, at least at this pace. The only other time in their 81 seasons that the Bears have finished last overall in point percentage came in 1949-50. That season Hershey tied with Cincinnati at .371 and 52 points apiece.

Put another way? Gordie Howe was in his fourth NHL season then.

This article is about:
News
Scoring Leaders 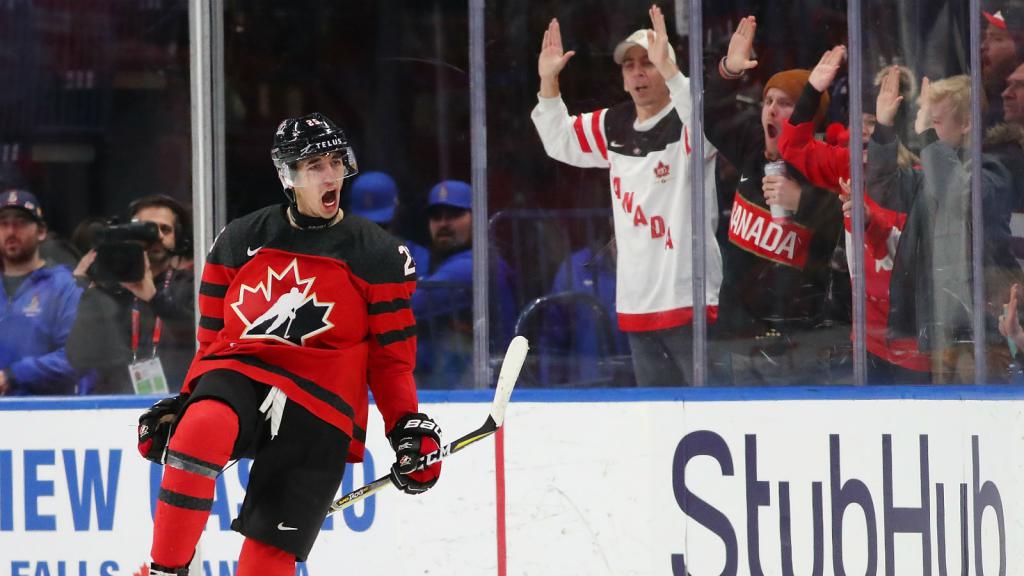