This has been the year of defensemen in NCAA hockey, and it only punctuates a growing trend across the sport.

The days of the lumbering defensemen are over. The wicked flameout of 6-foot-4 Griffin Reinhart — a Memorial Cup Most Valuable Player and fifth overall NHL Draft pick of the New York Islanders in 2013 — seemed to have signaled the final death throe.

For years, NHL teams had been slowly embracing the more mobile, puck-rushing defender — getting more comfortable with this type of player, little by little, even if they were under 6-foot tall.

But it seems the transformation is complete.

Surely, NHL teams still drool over the big defenseman, so long as they can also skate and move the puck. Team USA features a couple of those guys this year on its World Junior roster, Wisconsin’s K’Andre Miller and Western Michigan’s Mattias Samuelsson.

Meanwhile, you can make the argument that defensemen are the top four candidates for this year’s Hobey Baker Award, which goes to the NCAA’s best player. The last defenseman to win the award was Will Butcher two years ago. Before that Matt Carle in 2006, preceded by Jordan Leopold in 2002.

If you ask scouts, there is a debate over who is the best player in college hockey this year — although when you talk to scouts, that often means, who is the most NHL-ready player. But putting that aside, the conversation usually comes down to Massachusetts’ Cale Makar and Harvard’s Adam Fox, both defensemen.

Makar was the fourth overall pick in the 2017 NHL Draft, by Colorado, and has the Avalanche drooling. The 5-foot-11 Calgary native could easily join the Avs for a playoff run this year. But right now, he’s focused on UMass, just as he was last year, when he declined an invite to join Team Canada for the Olympics so as not to upset UMass’ season. Makar’s gifts are on display every night, and he was named captain this year for UMass despite being just a sophomore, which shows you how much he’s valued, and also the odds that he likely won’t be around next year. He has 6 goals and 19 points through 16 games, and all of his goals are at even strength.

Fox is a former U.S. National Team player, and was an Olympian last year, a New York native and 3rd-round pick of Calgary in 2016. His rights are now owned by Carolina. Harvard has lost a bunch of talent in recent years, and so this year, while still talented with a lot of fresh faces, is in a transition period. As a result, it’s harder to judge Fox on numbers alone, though he has 5 goals and 20 points in just 11 games. But seeing the way he runs the show out there every game, it’s easy to see why scouts love him.

When it comes to handicapping the Hobey, however, the difference is that Makar is playing on a team rated No. 1 in the Pairwise (the system used to pick the NCAA tournament field), whereas Harvard is currently 24th. So when it comes to determining value or Hobey-worthiness, Makar is going to get the nod right now.

The focus on those two, however, leaves out two more guys — Quinnipiac’s Chase Priskie and Minnesota-Duluth’s Scott Perunovich, both of whom are also exciting in their own way and should be at the top of the Hobey conversation.

Priskie has more points than any of them, and it 11th overall in scoring with 12 goals and 9 assists. He leads the nation in five game-winning goals and is second with 7 power-play goals. Priskie has always been a bit under the radar to scouts, because he wasn’t on any high-profile national teams coming up the ranks. But at 6-foot, I always called him a poor man’s Shayne Gostosbehere from the moment he stepped on campus, not least of which because he shares Gostisbehere’s Florida roots. His numbers have gradually increased every year, and now the 2016 6th-round pick of Washington is lighting it up every night, as Quinnipiac has risen to No. 3 in the Pairwise.

Perunovich is certainly well known to scouts, a former Team USA member and the second round pick of St. Louis last year. He had 11 goals and 36 points for Minnesota-Duluth in last year’s NCAA championship season, as a freshman. This year, he has just two goals so far, but leads the Bulldogs in scoring with 18 points, on a team that is again top-five and looking for another title.

There are other strong Hobey candidates to be sure — Penn State’s Evan Barratt, playing for Team USA at the World Juniors, currently leads the NCAA in scoring; and Arizona State, it with its breakout year opening everyone’s eyes, have two legit candidates in Johnny Walker, who leads the nation in goals, and goalie Joey Daccord, a 7th-round pick of Ottawa in 2015 — but the aforementioned defensemen stand out above, in my eyes.

It will be interesting to see whether the 30 Hobey voters can ultimately bring themselves to select a defenseman this year, and in particular, a sophomore defenseman like Makar, or even whether the votes will get split among the defensemen, and a forward winds up rising above. Goaltenders have an even longer drought in winning the Hobey, but that’s another conversation for another time.

But Hobey or not, the era of the mobile defenseman is upon us, and there’s no surer sign of that right now than in NCAA hockey.
This article is about:
Features NHL Prospects
Scoring Leaders 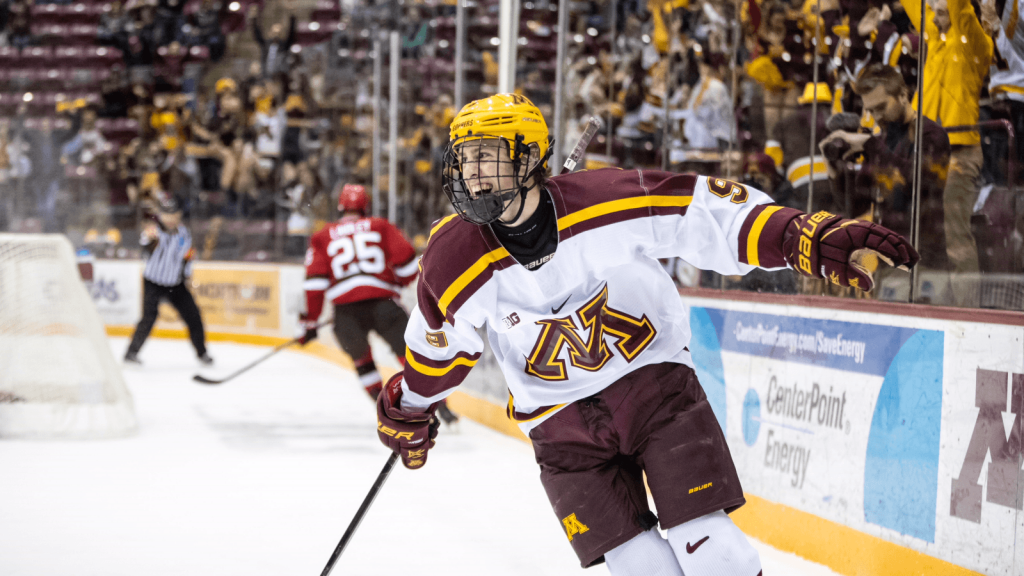 Next article Underdog Walker angling for spot at WJCs: “My competitiveness is my strength”