skip-main
RISING. Nils Lundkvist came out of nowhere and could be a first-rounder in Dallas next week. Photo: Bildbyrån/Magnus Lejhall
Uncategorized

Nils Lundkvist – a Swedish surprise a head of the draft

When the 2017/18 season started, he was pretty much an unknown commodity in Swedish hockey. As we approach the 2018 NHL Entry draft in Dallas, Nils Lundkvist could be a first-rounder. Here’s a look at how the mobile defenseman from Luleå got his big break.

Piteå in the north of Sweden could be considered a hockey hotbed. After all, the city with a population of about 40,000 people, has produced Stanley Cup winners such as Stefan Persson and Tomas Holmström as well as former NHL:ers Lars Lindgren, Mikael Renberg and Mattias Öhlund.

In a few years, we could probably add another name to that list of NHL players. Piteå also happens to be where draft eligible defenseman Nils Lundkvist grew up and played hockey before making the logical move to Luleå, 45 minutes north, at the age of 14. Logical in the sense that he had family ties to Luleå’s SHL team. That’s where his uncle Jan Sandström played for 17 straight seasons and became a cult player before hanging up the skates at the age of 40 this past spring.

Before entering this season, Sandström and Lundkvist joked that it would be cool to at least get the chance to practice together at the SHL level before their careers went their separate ways. In the end, they got to do much more than that.

Nils Lundkvist came into the season as an unknown commodity. At 17, he had never played for any of the younger Swedish national teams nor been on the radar for a shot at the SHL. But when Florida Panthers’ draft pick Linus Nässén left Luleå to play for Medicine Hat Tigers in the WHL and his own uncle got hurt,  the team called upon his services. After making his SHL debut against Malmö on October 26th, he only needed a month to convince the coaches that he belonged in the SHL.
“Everything went really fast, a lot faster than I expected”, he told Elite Prospects in April. “I’ve grown a lot these past two years, got some muscle and have become both faster and stronger. After that, everything just kind of rolled on and I’ve had some luck on the way.”

THIRD MOST ICE-TIME PER GAME AMONG JUNIOR D

He finished the regular season with two goals and five points in 28 regular season games while averaging 16 minutes a game. Rasmus Dahlin, Frölunda, and Erik Brännström, HV71, were the only other defensemen under the age of 20 to receive more ice-time than Lundkvist.

His maturity on the ice not only gave him a chance to represent Sweden internationally for the first time. He also came to play a big role in the U18 World Championships, where Sweden won a bronze medal.

At 5’11 and 175 pounds, Lundkvist is a small but smart and efficient defenseman, known for making good decisions with the puck. This has made him interesting to a lot of NHL teams who are looking for puck moving defensemen at the draft in Dallas next week.
“After Christmas, I started to notice that a lot of teams started to pay attention and wanted to talk to me”, Nils Lundkvist said. “It kind of exploded, which is really cool. If you had asked me a year ago, I would never have dreamed this would happen.”

The progress he has made in the last year could even make Lundkvist a first-rounder. A few scouting services have him among the top 31 players.  Hockeyprospect.com have him as number 16 on their final rankings.
“He popped on our radar late in the fall and was impressive”, Mark Edwards of Hockeyprospect.com writes in their 2018 NHL Draft Black Book. “He’s one of my personal favourites in this draft class. He’s smart and has skill. He can really skate and he creates offence. He defends better than a lot of defenseman in this class. I thought he was fantastic at the Five Nations in Plymouth and I really liked him in league play back home.”

CREDITS HIS UNCLE FOR SUCCESS

To Lundkvist, the draft will be an adventure. But it still might not be the highlight of his year. Playing alongside his uncle Jan Sandström in Luleå during parts of his last season is an experience that’s going to be hard to beat.
“Before one of the games, we got to sit next to each other in the dressing room. That was incredibly cool, almost like a dream come true”, Lundkvist said. “And to be a part of his last game and see how the fans paid tribute to him, that was out of this world. I was incredibly proud that he was my uncle.”

Growing up with an uncle in pro hockey opened Lundkvist’s eyes early on. It gave him a great role model to mimic and learn from.
“He’s been a source of inspiration ever since I was a kid”, he said. “When I broke into the SHL it was a big relief to have him around. I’m not going to say that he protected me, but he was there to show me the ropes and anser questions when I had one. It made me feel comfortable on the team and I think that also helped me on the ice.”

I read somewhere that he used to change your diapers when you were a baby…
“(Laughter) Well, I guess so… There’s a few years difference in age.” 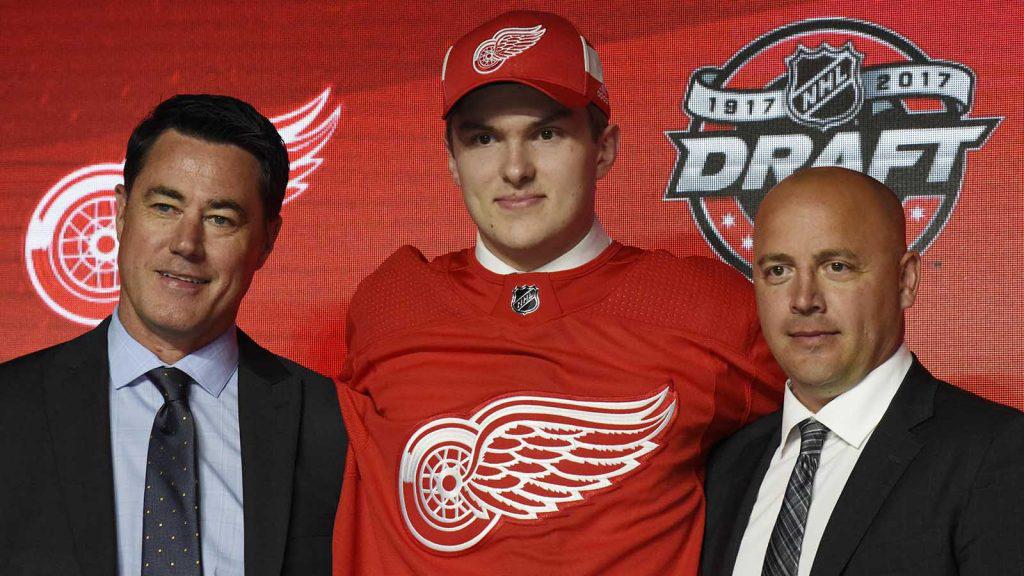 Next article PROSPECT REPORT: Detroit’s run of success finally caught up to them