For Ty Dellandrea, finding positives this season has been difficult.

Though the Dallas Stars prospect is on pace to set new career highs in goals and points, being the captain of the last place Flint Firebirds has taken its toll.

“It’s been a tough year as a team with the coaching change and everything, there’s been a lot going on,” Dellandrea said. “We have a really good group of guys in here though and we’ve been making the most out of it.

“Since Christmas especially we’ve been working really hard as a group in practice, putting a lot of time in and I think that’s kind of going to show, we’ve got a couple wins and most importantly we’re in every game, competing in every game.”

With Flint starting the season 0-8-0, Ryan Oulahen stepped down as coach of the Firebirds citing personal and family reasons on Oct. 12. Eric Wellwood, who served as an assistant coach in Flint during the 2016-17 season, took over behind the bench on Oct. 18.

Part of Wellwood’s job has been trying to take the stress of losing off the shoulders of his leader.

Flint currently sits at the bottom of the Ontario Hockey League standings with a 9-38-3 record and with 18 games remaining in the regular season is on pace to set a new franchise-low for wins beating the previous mark of 20 set both in 2017-18 and 2015-16 while missing the playoffs for a second consecutive year.

Wellwood understands what a winning culture looks like  – the former Philadelphia Flyers forward won back-to-back Memorial Cups with the Windsor Spitfires as a player and was part of the coaching staff in Oshawa when the Generals won the top prize in the CHL in 2015.

Now the 28-year-old is trying to help Dellandrea through a difficult season by taking onus of the teams’ on ice failures.

“I try to take as much stress from him as possible,” said Wellwood. “I do challenge him as a leader, especially when it comes to making sure the room is ready to play the games, but it’s one of those things where there’s situations that he just can’t control and I know he wears that, but it’s just the reality of the situation that we’re in this year.

“He’s a guy that wants to win. Obviously we haven’t done a lot of it this year, but I just let him know, as well as the team, that it’s a process to win. You can’t just come in and snap your fingers and all of a sudden you’re a good hockey team. It takes time to grow.”

Though there hasn’t been much winning in Flint during his three seasons – the Firebirds qualified for the playoffs in 2016-17 – Dellandrea did get a taste of winning hockey in August 2017 while representing Canada at the Ivan Hlinka Memorial Cup as Canada defeated the Czech Republic to win gold.

“I’d never really won anything really big like that,” Dellandrea said. “I’ve always been just super competitive and hate to lose, but winning that definitely adds more drive to want to win a lot more. I never want to lose. Definitely when you have that taste of winning and winning gold, it brings you in more motivated and closer to winning a lot more other things.”

The Port Perry, Ontario native also wore his country’s colours at the 2018 IIHF World Under-18 Championship scoring two goals and three assists in five games, but the Canadians fell to the Czech Republic in the quarterfinals last spring.

“Those experiences – all the Hockey Canada experiences, that gold medal (in 2017) – it’s just how to win, really,” Dellandrea explained. “You take those back with you and try to rub that off on the other guys. How competitive they are, how hard they work. You take little bits and pieces from everybody’s game too, you’re playing with a lot of great players. You learn stuff from what they do and you try to added it to your game – kind of create the best all-round game you can.”

Following his Under-18 performance Dellandrea was one of 40 players invited by Hockey Canada to the World Junior Summer Showcase in Kamloops, B.C. The 6-foot, 190-pound centre was also at the the World Junior selection camp in December, but was one of the first forwards released.

The snub by Hockey Canada coupled with the poor start to the season in Flint provided Dellandrea with plenty of motivation for the second half of the season.

“I think it was a great experience, even going out (to Victoria) and trying out,” Dellandrea said. “I had a lot of fun and learned a lot from that, but I think what I took from that is not a lot of guys get cut from something growing up so being cut from that, I learned a lot.

“It was eye-opening and just extremely motivated coming back and leading into the second half and kind of taking a bit of frustration and motivation out. I’ve been putting a lot of work in the gym and behind the scenes to kind of become a better player from being cut from that.”

Dellandrea has 17 goals and a team-leading 50 points through 44 games this season in Flint – well on his way to setting career-bests in both categories, but with 18 games left in the regular season, the 18-year-old is more focused on his team’s success in the final month and a half.

“I just want to finish the season strong as a team, individually as well,” said Dellandrea. “We want to get more wins as a team and leading into next year, if I’m back. Personally, I just want to continue to be a great leader and work on my leadership skills with the young guys and obviously produce and help this team to some victories.” 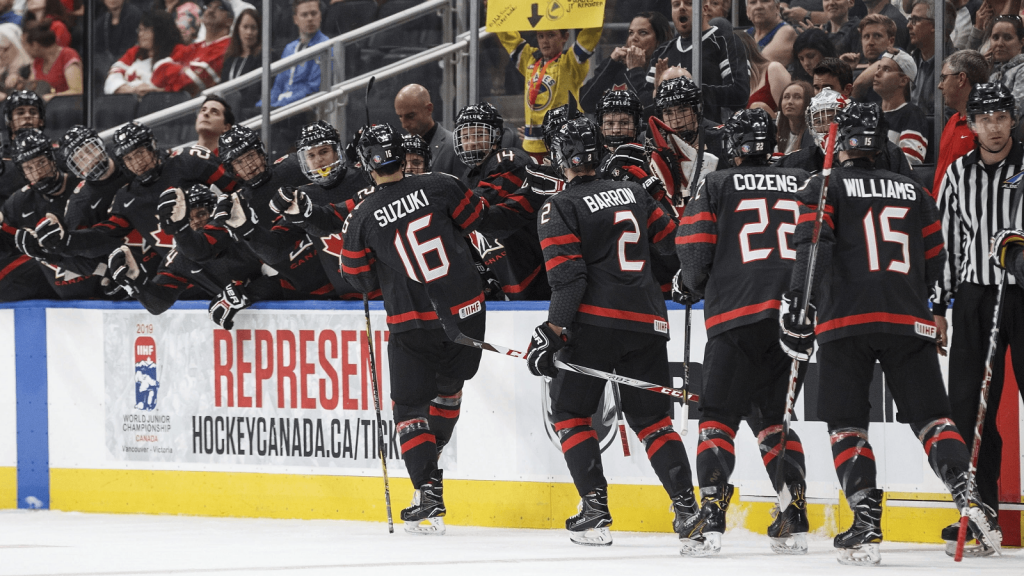 Next article Ryan Suzuki following in older brother Nick’s footsteps: “He shows me the ropes”