skip-main
Henri Jokiharju will try and find his game in the AHL
PHOTO: Bildbyran.
NHL Prospects

As always, EP Rinkside’s Patrick Williams has you covered on the latest developments in the premiere developmental league in the hockey world.

Add another teenager with first-round credentials to an AHL roster.

This time it is Chicago Blackhawks defenseman Henri Jokiharju who AHL-bound, sent to the Rockford IceHogs on Thursday. The assignment makes the 19-year-old Jokiharju, a 2017 Blackhawks pick taken 29th, the fifth-youngest player in the AHL.

To boil down complex AHL eligibility rules to something simpler, the NHL-CHL player-eligibility agreement means that players younger than age 20 are rare in the AHL (with some exceptions that can come into play with players who played in Europe, next went to the CHL, and then moved on to an NHL organization). However, AHL rules do allow players who turn 18 years old “on or before” September 15th of each season to compete in the AHL. That means that players from European leagues and the NCAA, for example, are not bound by the NHL-CHL restriction. Last season New York Rangers top prospects Lias Andersson and Filip Chytil spent time with the Hartford Wolf Pack as 18-year-old first-round draft picks.

Jokiharju chipped in 12 assists in 37 games for the Blackhawks, but his ice time had decreased recently. In his final game before being sent to Rockford, he skated 12:55, his third-lowest total this season. After playing 24:17, his third-highest total this season, on December 2nd against the New York Islanders, he did not eclipse 19:56 in any of his next 12 games. In that span, he averaged 15:34 per game. That followed a 21:00 average over his opening 25 games of the season. The Chicago blue line has also gotten healthier recently.

“He’s 19 years old and it’s hard, physically, to get out of the d-zone when you’re that,” Colliton said to the Chicago team website. “Obviously, he doesn’t have the ‘man body’ yet, but he will. And we want him to not just be playing to survive out there. We want him to be playing to excel and be a top player.”

Putting players in a position to do more than “survive” in the NHL is a theme that Colliton stressed when he guided Chicago prospects as the head coach in Rockford before his own promotion to the Blackhawks earlier this season. He emphasized the need to ready AHL players, confidence-wise, so that they feel that they belong if and when they eventually reach the NHL.

Going to Rockford is the latest adjustment for Jokiharju, who played for gold-medal winner Finland at the under-20 World Junior Championship earlier this season, There, he had 2-3-5 in the tournament before returning to the Blackhawks.

Certainly the 19-19-3-5 IceHogs can use any help that Jokiharju can provide their blue line, especially with his handy right-side shot. Their 30th-ranked power play could use a boost as well, and Jokiharju averaged the fourth-most power-play time among Blackhawks defensemen this season. Five points out of a Central Division playoff spot, the IceHogs host the Wolves on Friday night and then head on the road against the Milwaukee Admirals on Saturday night. A six-game homestand starts next week and features back-to-back meetings with the Tucson Roadrunners next weekend.

But it would be foolish to assume that Jokiharju’s draft pedigree will guarantee AHL success. Andersson is 2-3-5 in 13 games for Hartford since returning from the Rangers. Zadina has had some bright moments and is 11-11-22 in 37 games, but he is still trying to learn the pro game that head coach Ben Simon stresses to him.  Kaut is 8-9-17 in 36 games with the Eagles. Sandin has progressed well with the Marlies, and Brännström looks like a sure-bet NHL defenseman next season, if not sooner.

Add that up, and it means that there are no hard-and-fast rules for the AHL development curve for players still awaiting their 20th birthdays — even if they are NHL first-rounders.

THE STRETCH DRIVE HAS ARRIVED FOR SOME TEAMS

Uneven first-half play has left some teams with minimal margin for error over their final 25-30 games of the regular season. Atoning for those struggles will have to start this weekend if those teams are to remain in contention. The breakdown looks like this:

Atlantic Division: The Hershey Bears (45 points and six points out of a playoff spot) and the Hartford Wolf Pack (43 points and eight points out) need strong runs in February. Hartford is on a 3-6-1-0 slide and has tough tests at the Springfield Thunderbirds on Friday and back home against the Rochester Americans on Saturday night. A 6-0-0-1 run has put the Bears back into contention, but they still have plenty of work to do. Hershey is off Friday before hosting the rival Lehigh Valley Phantoms on Saturday night and welcoming the Belleville Senators for a Sunday matinee.

North Division: Four points separate the four teams below the playoff line. The Marlies only have a three-point lead on fourth place as well. In all, only 13 points separate first-place Rochester from last-place Belleville, the smallest such gap in any of the AHL’s four divisions.

Central Division: Along with Rockford, the Manitoba Moose still remain in contention. They face a critical visit to Milwaukee on Friday night; the fourth-place Admirals could expand their lead to 10 points on the Moose. With a 10-game road trip staring the San Antonio Rampage in the face, they must continue their strong play to stay in contention. Such is the damage that stems from a 3-12-0-0 start. A recent slump has bumped the Texas Stars out of the Central top-four.

Pacific Division: While the Ontario Reign have long since faded from contention, the Stockton Heat could be next if they do not pick up the pace. They resume play eight points behind the fourth-place San Diego Gulls. A home-and-home series with the Pacific-leading San Jose Barracuda is another hurdle this weekend.

On Friday the AHL handed out monthly awards for January. Hershey forward Riley Barber took the CCM/AHL Player of the Month honor after going 7-7-14 in 10 outings for the red-hot Bears. Alex Nedeljkovic of the Charlotte Checkers squeezed in time with the Carolina Hurricanes and also earned the CCM/AHL Goaltender of the Month award. He put together a 6-0-0 | 1.78 | .937 month for the AHL-leading Checkers. Bakersfield Condors forward Cooper Marody won the CCM/AHL Rookie of the Month award. He put up a 3-10-13 performance in 13 games as the Condors tore through the Western Conference. They take eight consecutive wins into play this weekend. His 9-23-32 performance puts him fifth in AHL rookie scoring.

The Providence Bruins are back in business after an 8-1-1-1 January. They are on a 7-0-1-1 roll after knocking off Charlotte and Springfield on back-to-back nights at home this past weekend. After starting the season with the Dallas Stars before going to the Boston Bruins, forward Gemel Smith led the way for Providence with 7-6-13 in 13 games in January.

The Syracuse Crunch will be without forward Gabriel Dumont on Friday night. The AHL levied a one-game suspension for a head-check this past weekend. He is 5-15-20 through 26 games for the Crunch, who are home Friday and Saturday nights.

Belleville head coach Troy Mann will return this weekend to Hershey, where he had been a head coach for the past four seasons. After being let go by the Washington Capitals, he took the Belleville job.

The Binghamton Devils and the Iowa Wild exchanged defensemen in an NHL trade this week. The Minnesota Wild sent Iowa’s Ryan Murphy to the New Jersey Devils for Michael Kapla. Murphy, now 25, was the 12th overall pick in the 2011 NHL Draft by Carolina but has not panned out. He is 3-12-15 in 35 games for Iowa. Kapla, 24, was in his second season in Binghamton, where he went 1-15-16 in 45 games. He signed with New Jersey in 2017 after four NCAA seasons at the University of Massachusetts-Lowell.

Friday – Providence at Charlotte: Last weekend in Providence, the P-Bruins handled the Checkers rather handily. This weekend starts a pair of games between the teams on Charlotte ice. With Zane McIntyre in Boston, the Providence net belongs to Dan Vladar.

Saturday – Iowa at San Diego: Two Western Conference powers get together in Southern California. The Wild knocked off the Gulls in Iowa back on January 14th, ending San Diego’s eight-game win streak. The Wild are on a tough California road trip that begins a punishing road schedule over the next month-plus.

NHL veteran winger Jamie McGinn is off to Springfield from the Florida Panthers. He had yet to dress for Florida after back surgery. He has played 598 regular-season NHL games and popped in 13 goals last season….Stockton forward Andrew Mangiapane returned to the Calgary Flames after two games for the Heat….Bridgeport lost forward Michael Dal Colle and defenseman Devon Toews on recall to the Islanders….Texas forward Denis Gurianov went back to Dallas….AHL veteran Mike McKenna is back in the league, this time on a conditioning assignment with Lehigh Valley. He will play his first AHL game since October 26th when he was in Belleville….Defenseman Jake Dotchin went back to San Diego on assignment from the Anaheim Ducks; forward Jaycob Megna departed for Anaheim….Providence sent goaltender McIntyre along with forwards Peter Cehlárik and Trent Frederic to Boston earlier this weekend. Forwards Ryan Donato and Jakob Forsbacka Karlsson went to Providence….Through Thursday, 79 AHL players have made their NHL debuts this season.

This article is about:
AHL NHL Prospects
Scoring Leaders 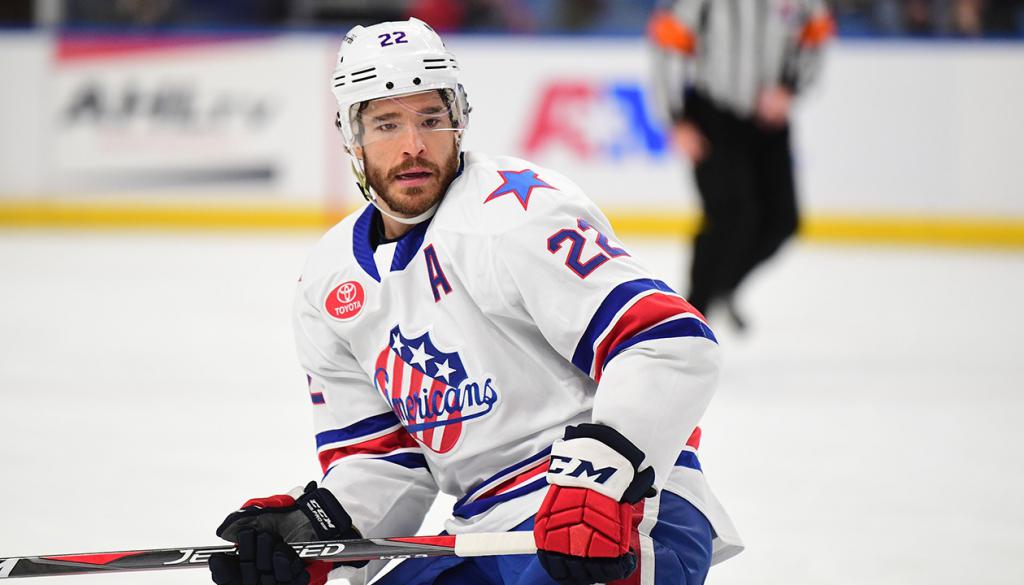