AHL WEEKEND: Seventeen down, eleven to go for the Condors

Friday nights in the AHL mean the start of a busy weekend. EP Rinkside has this look around the 31-team league to set you up for this weekend’s slate.

PUTTING IT ON THE LINE
If the Bakersfield Condors are to extend their 17-game winning streak past this weekend, they will have to overcome some of the AHL’s top competition.

Bakersfield hosts the Iowa Wild on Friday night with a chance to move past the 2004-05 Philadelphia Phantoms and take sole possession of the second-longest winning streak in the AHL’s 83-season history. Off in the distance are the 2011-12 Norfolk Admirals’ AHL-record 28 consecutive victories. Norfolk lost on February 5, 2012 and then ran the table through the rest of the regular season.

Bakersfield has not lost since falling 6-3 on the road to the Colorado Eagles on January 11th. Now at 33-15-2-1, Bakersfield has moved from fifth place in mid-January into a three-point Pacific Division lead on the San Jose Barracuda.

But their weekend schedule presents another challenge. Iowa is three points out of first place in the Central Division going into this weekend.

Back in their days as a fifth-place hockey team on January 16th, they led the sixth-place Stockton Heat by two points. At the time, San Jose held first place and had an 11-point lead on the Condors. Stockton still sits in sixth place, but the Condors have taken that lead to 20 points. The Condors are coming off taking both wins against the Tucson Roadrunners in a two-game road set earlier this week, the second such sweep the Condors have pulled off in Tucson in the past month.

Rookie forwards Cooper Marody and Tyler Benson have excelled throughout the run. Benson is tied for third in rookie scoring (9-35-44 in 51 games), and Marody is right behind him in a fourth-place tie (12-29-41 in 41 games). Marody, a 22-year-old taken in the sixth round by the Philadelphia Flyers before a late-season trade to the Edmonton Oilers last year, has been a force for the Condors. In the streak’s 17 games, he is 5-14-19 in that span and will carry an eight-game point streak (3-6-9) into Friday night’s meeting with Iowa. Benson, a 2016 Edmonton second-rounder who does not turn 21 until March 15th, has also been dominant throughout the run. He is 5-15-20 in playing 16 games. His game-winner sent the Condors on to the sweep in Tucson earlier this week, and he has points in seven of his past eight contests (4-6-10).

After Oilers president of hockey operations and general manager Peter Chiarelli was fired in January, Oilers Entertainment Group chief executive officer and vice chair Bob Nicholson stressed the need to change the organization’s development philosophy and pivot toward patience. Still another fresh forward, Kailer Yamamoto, became the first Oiler after Chiarelli’s departure to feel the impact of that philosophical change. Edmonton sent him to Bakersfield that day. Since his arrival, the 22nd pick in the 2017 NHL Draft has gone 4-2-6 in 11 AHL games.

Condors head coach Jay Woodcroft now has Yamamoto with Marody and Benson, a real glimpse at what Oilers fans could see in Edmonton at some point. Woodcroft came to Bakersfield before this season after three seasons as an assistant coach in Edmonton.

Surrounding that young core are veteran scorers in Patrick Russell (15-16-31) and Joe Gambardella (25-16-41). Eight of Russell’s goals have come during the streak. Josh Currie remains on recall with the Oilers, but he is 24-13-37 in 49 AHL games. Edmonton made both Currie and forward Brad Malone eligible to return to the Condors down the stretch.

And then there is 24-year-old goaltender Shane Starrett, named the CCM/AHL Goaltender of the Month for February. He is 20-3-3 | 2.24 | .920 through 29 games for the Condors in his first full AHL season. He has taken 14 of the 17 wins during the streak. Edmonton signed him as an NCAA free-agent out of the Air Force Academy after his 2016-17 season with the Falcons.

AROUND THE A
With 17 wins in their past 19 games, the Hershey Bears have pulled into third place in the Atlantic Division. They blew past the Hartford Wolf Pack with four third-period goals in a 4-1 road win this past Wednesday. They are also within six points of the second-place Bridgeport Sound Tigers, who visit Hershey on Saturday night. Bridgeport ended Hershey’s franchise-record 17-game point streak (16-0-0-1) this past Sunday in Connecticut, but the Bears have gone on a run at home and not lost there since January 6th (9-0-0-0).

Trying to stay in the Central Division playoff race, the Manitoba Moose will be without goaltender Eric Comrie on Friday night when they visit the Belleville Senators. Comrie went to the parent Winnipeg Jets on Friday morning as an emergency recall. The fourth-year AHL netminder is 20-15-2 | 2.73 | .917 for the Moose in playing a league-high 40 games among goaltenders. Manitoba starts play this weekend four points behind the fourth-place Rockford IceHogs. Manitoba still has Mikhail Berdin and recalled ECHL goaltender Ken Appleby.

Holding a 4-2 lead deep into the second period, the Cleveland Monsters left the door open for the Laval Rocket. Laval’s Hayden Verbeek scored at 19:58 in the middle period, cutting the Cleveland to 4-3. The Rocket then popped in two more goals in the third period to take a 5-4 win in Cleveland. That leaves the Monsters marooned six points out of a North Division playoff spot. “For a team that is fighting for the playoffs, we didn’t seem to be a team that had any energy,” Cleveland head coach John Madden told the team website after the game. “Just lethargic hockey.” They host the Rocket again on Friday night.

A lighter first-half schedule now must be made up for by the Syracuse Crunch. They have a 3-in-3 weekend and will play 16 games in March, including nine contests in 16 nights to start the month. Syracuse’s 22 remaining games are the most of any AHL team..

Packed itineraries are nothing new to the Providence Bruins, who will play their fourth in a run of five consecutive 3-in-3 weekends.

The San Antonio Rampage are finally back on home ice this weekend. They host the Milwaukee Admirals in a pair of games after winning twice on a 10-game road trip through the Western Conference that left them stuck in last place in the Central Division. Goaltender Ville Husso returned for a 6-0 loss to the Colorado Eagles this past Wednesday after missing two months with an injury.

PLAYOFF PICTURE
A 3-in-3 weekend is staring down the Lehigh Valley Phantoms as they try to chip away at the four-point gap between them and a playoff spot. They visit Syracuse, host the Utica Comets, and then have the Sound Tigers at home on Sunday to round out their weekend. Desperation might begin to descend on the Wilkes-Barre/Scranton Penguins, five points out of a playoff spot, if they do not have a good weekend. They have a 16-season playoff streak. Visits to Providence and Hartford are up next.

Thanks to an 11-0-0-4 tear through February, the Belleville Senators are within one point of a North Division playoff spot. Defenseman Erik Brännström, the centerpiece of the Ottawa Senators’ trade with the Vegas Golden Knights for Mark Stone, will make his Belleville debut.

Rockford’s 61 points hold down fourth place in the Central Division. The IceHogs have the Texas Stars (60 points), Milwaukee (58), and Manitoba (57) breathing down on them. San Antonio is at 55 points.

Stuck in a 2-6-1-1 slump, Tucson is now tied for fourth place in the Pacific Division.

WITH HONORS
Along with Starrett, Chicago Wolves sniper Daniel Carr and rookie standout Drake Batherson also received monthly honors from the AHL on Friday. They named Carr the CCM/AHL Player of the Month after he went 8-9-17 in 11 games for the Wolves. His 70 points in 49 games lead the AHL, and he is tied for the league leads in goals (29) and assists (41).

Batherson took the CCM/AHL Rookie of the Month honor after a 9-9-18 February in 10 games for the Sens.

QUOTEBOOK
“I’m eight years into my pro career, and I’m honestly done trying to figure it out.”
–Rockford forward Peter Holland on the hockey business. He went to the Chicago Blackhawks organization in a February 18th trade from the New York Rangers. The deal came amid a housecleaning in Hartford even though he led the Wolf Pack in scoring. In the past six weeks, Rangers management has shipped out Holland, captain Cole Schneider, and Marek Mazanec out of Hartford in trades and sent goaltender Dustin Tokarski to the Charlotte Checkers on Thursday.

THIS WEEKEND
Friday – Iowa at Bakersfield: The Condors are 3-0 against Iowa this season. The Wild have a busy weekend, moving south to visit the Ontario Reign for back-to-back games.

Saturday – Bakersfield at Tucson: Bakersfield and San Jose have split their season series so far. Next week the Condors go back on the road for three games, including playing twice at San Jose.

ON THE MOVE
Hartford rookie defenseman Libor Hajek was recalled to the Rangers….Iowa lost veteran forward Matt Read on recall to the Minnesota Wild….The Comets shuffled their goaltending picture earlier this week. Ivan Kulbakov, at one time the number-one for the Comets, was sent to the ECHL. Mazanec went to the Comets earlier in the week to pair with Michael Leighton….Through Thursday, 90 AHL players have made their NHL debuts this season. 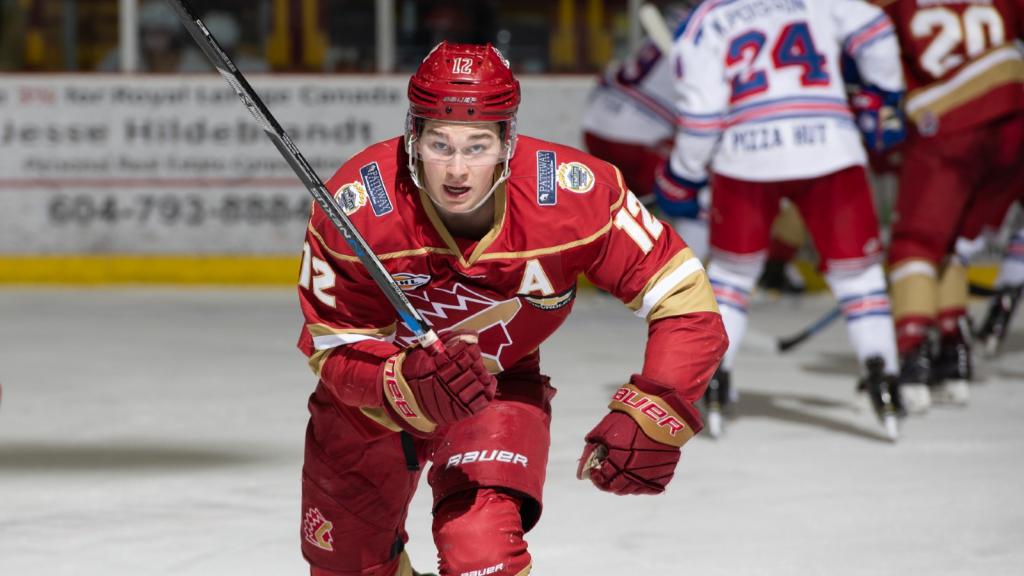