Ryan Johnson knows he best be a strong skater.

He really isn’t afforded any other option.

Not when Craig Johnson, his father, was a burner in the NHL before flipping sides and becoming a development coach — with an emphasis, of course, on skating — with the Los Angeles Kings.

“One of my strengths is my skating,” said Johnson, a standout defenseman for the Sioux Falls Stampede of the United States Hockey League and a potential first round selection in the 2019 NHL Draft.

“I have to continue keeping that one of my strengths. I just have to keep on working on that and keep it my strength, then I’ll have that extra step on a guy. It helps with defending. It helps with all aspects of the game. Nowadays guys are really fast. After practice, sometimes, I don’t even pick up a puck. I’ll just skate around the rink. I just find it fun.

“It’s huge to have my dad. My dad was a really good skater when he played. He teaches me everything. It’s nice to have him as a coach. He’s worked with me a lot, improving my stride and everything.”

It’s worked to this point.

Johnson jumps off the page with his silky smooth stride.

It’s the main reason why Johnson will be a highly sought-after prospect come draft day.

“What stands out the most is his skating ability and his overall skills,” Stampede head coach and general manager Scott Owens said of Johnson, No. 36 among North American skaters in NHL Central Scouting’s midterm ranking.

“He’s able to make a lot of plays and defend and break the puck out because of his feet. He sees the ice well and he can make passes. He’s got a little bit of a creative element to his game and he’s just a real good player. He plays with his head up. He’s pretty complete.

“Because of his feet he’s able to defend, and because of his hockey IQ he can play on the offensive side of the puck as well.”

Owens has seen it first-hand.

His freshman blueliner has been a standout despite entering unfamiliar territory.

“It’s my first year away from home.

“But the team’s been awesome. The coaches are great. The town is great here in Sioux Falls. I’ve been enjoying it. Obviously it’s nice having a lot of competition every night. It’s always a tough night. But it’s also nice playing with guys that are skilled and give you the puck and they’re always talking. It’s been nice both ways. I think it’s a lot faster. Every level is a jump. It’s how you have to adjust.

His skating ability has helped ease the transition.

It’s not the only area father has influenced son, though.

Craig, himself a second round pick (No. 33) in 1990 before logging 557 skates with the St. Louis Blues, Kings, Mighty Ducks of Anaheim, Toronto Maple Leafs and Washington Capitals, has also helped deal with the ups and downs of what is Ryan’s most important season to date.

He’s got perspective from all sides, after all.

“He’s been everything,” said Ryan, who has 21 points (five goals, 16 assists) in 40 games in his rookie season in the USHL with Sioux Falls.

“He tells me not to worry about (the pressures) and just play my game and that’s kind of what I do. I don’t really worry about that.

“I just try to focus on just playing my best every night and just working hard on the ice and just having fun. The rest will take care of itself. The main focus is on the game and just winning and you try to just forget about the scouts or everything else until after the game.

“Everything he says is huge for me. I like hearing from him.”

Owens sees that maturity, and lineage, in Ryan.

That fatherly advice, too.

And the impact dad has had on son.

On skating, and otherwise.

“He’s a young player in this league,” he said.

“He’s an 11th grader. But I think for a youngster his age he’s definitely ahead of it. I think it sets him apart.

“Then I think you’ve got the other element of that his father is able to work with him as a skills coach, too, coming through. To work with him…both on team concepts, but work with him individually on skills…including his skating, using his edges…

“The bloodlines are really good.” 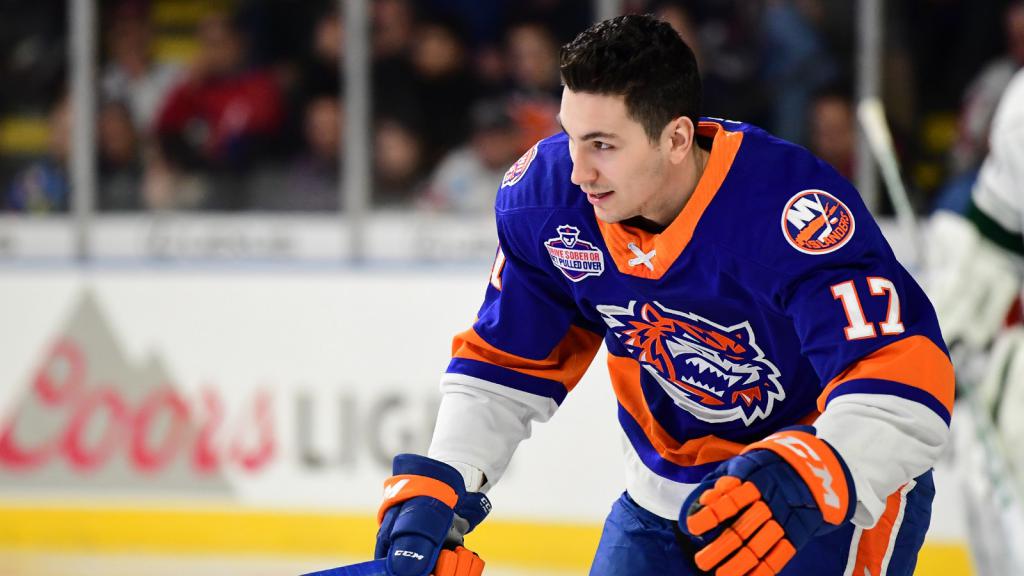 Next article AHL ON THE ROAD: Setting a tone in Bridgeport