Quinton Byfield has always been an offensive-minded hockey player, but spending the first few years of his minor hockey career as a defenceman helped him become the 200-foot player he is today with the Ontario Hockey League’s Sudbury Wolves.

Byfield, the first overall selection at the 2018 OHL Priority Selection, modelled his game after former Pittsburgh Penguins defenceman Sergei Gonchar while patrolling the blue line, but quickly became a fan of hall of famer Martin St. Louis on the offensive side of the puck.

“I was a really offensive defenceman,” Byfield recalled. “I was just always in the rush so I was just like ‘why not go forward?’. “I know my responsibilities down there and I know where the defence would like to have their forwards so that’s where I try to be.”

Despite his experience on the blue line, it was his play away from the puck that Byfield highlighted as an area of focus entering the 2018-19 season.

Cory Stillman, along with his coaching staff in Sudbury, spent the first months of this season helping Byfield shake some of his bad habits.

“We worked hard on his defensive coverage,” Stillman said. “As a young guy playing midget, they can just fly around and he’s now learning to come back in his own zone. Now that he does that, he also kills penalties. His learning degree, curve, is continuing to grow and he’s only going to get better. “

The Newmarket, Ontario native already has NHL size at 6-foot-4 and 214 pounds, and though he’s not eligible until 2020, Byfield already has scouts salivating at his potential.

“He’s got a 200-foot game. That is impressive,” said ISS Hockey Scouting Director Dennis MacInnis. “This kid is playing with confidence; he’s leading his team. He’s the No. 1 guy on that team right now.”

One of the youngest players on his team – Byfield doesn’t turn 17 until August – the centre is leading Sudbury with 29 goals and 61 points through 61 games.

Stillman, in his second season behind the Wolves bench, has no hesitation about putting his rookie on the ice in all situations.

“For me, if you’re playing and you’re playing well, you’re going to play all the time whether you’re 16 or 20,” Stillman said. “It gives the guys an opportunity to play and also for a young guy to realize ‘hey, I can learn as I go and play a lot of hockey’.

“When you watch him play you can see he’s going to be a star. For a big guy, he skates well, he gets a chance to be a leader on our team.”

Byfield is third amongst OHL rookie scoring behind Saginaw’s Cole Perfetti and Ottawa’s Marco Rossi, but Byfield’s all-round game has him as the top-ranked OHL skater on ISS Hockey’s list for the 2020 NHL draft. Byfield is third overall behind QMJHL star Alexis Lafreniere and Swedish forward Alexander Holtz.

“He’s got that ability to get that snap shot off in stride, that’s a unique skill set in itself, not many guys can do that, especially at that age,” said MacInnis. “He uses (his size) already, at 16, at this level. He’s a beast, at this level. He’s only going to physically get stronger so yeah, the sky is the limit on him.”

While his on-ice production hasn’t surprised him, Byfield credits his off ice work with renowned fitness guru, and former NHLer, Gary Roberts for getting him prepared for the rigors of junior hockey.

“He definitely has us eating healthy, all the shakes and everything, training right. He puts a program together and I think that really helps me,” Byfield said. “He actually works with our team now. So he comes down every month and just puts us through a training program.”

As Byfield moves into his second OHL season, and his NHL draft year, scouts would like to see him use his size more to his advantage.

“I’d like to see him be more assertive physically. Be able to drive the middle,” said MacInnis. There’s all kinds of little things you can work on. He’s a big, strong kid, he’s got everything as far as the scouting.”

This article is about:
Features NHL Entry Draft 2020
Scoring Leaders 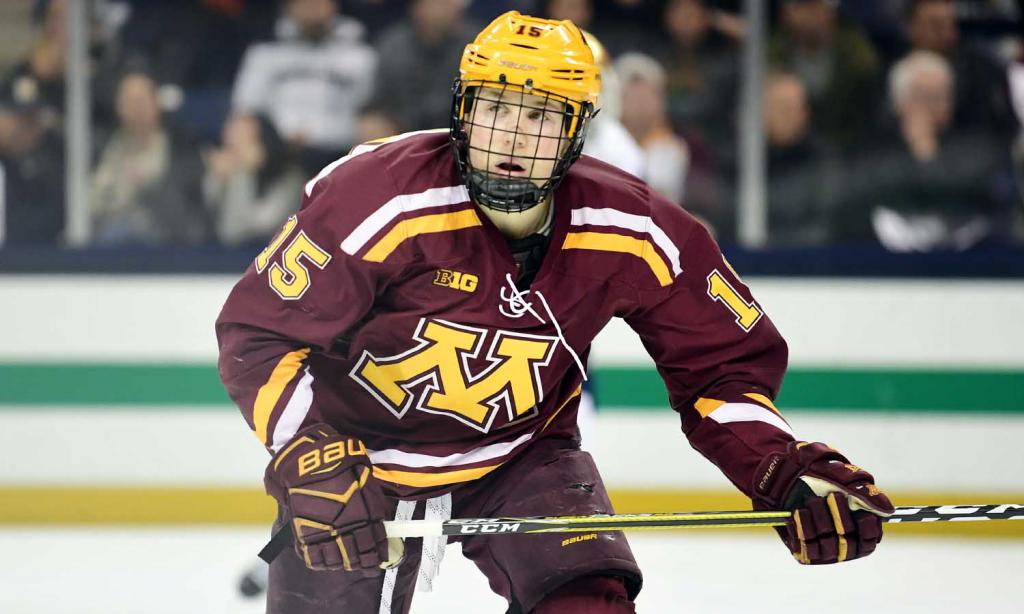 Next article Pitlick carry on proud family tradition with the Gophers