Bright future for Hults after standout year at Penn State

Wisconsin native Cole Hults has had a standout sophomore year with Penn State, one that bodes well for his future.

The 6-foot-2, 195-pound defenseman can add size and speed to any backend. He has been a key part of the Nittany Lions’ defensive corps since he arrived on Penn State’s campus in 2017. This year, it went to another level.

“He’s been huge for our success [this season],” Penn State coach Guy Gadowsky said. “Along with his defensive partner (Paul DeNaples), they’re our number-one pair. I mean, their plus-minus is exceptional. Cole leads our team in scoring for a defenseman yet he plays against the other team’s top line. He’s a shutdown defenseman who makes great plays. He’s an integral part of everything that we do. He’s a huge part of our power play and our penalty kill. He does everything.”

Hults played his junior hockey close to home, for the Madison Capitols in the USHL. During his junior career, he racked up 42 points in 122 games but finished with a plus-minus rating of minus-28. Hults was drafted in the fifth round (134 overall) by the Los Angeles Kings in 2017.

In his freshman college season, Hults was Penn State’s second-highest scoring defenseman, with 20 points. He also cleaned up his defense, finishing with a plus=6 rating and 66 blocks (also second on the team). This season, Hults has doubled his goals scored (six) and upped his points to 28 in 37 games played.

Gadowsky described Hults’s play style as “low risk, high reward,” and made references to his defensive mentality and offensive ability. In the defensive zone, Hults serves as a shutdown defenseman. On the breakout and in the neutral zone, a puck-moving defenseman. In the offensive zone, a playmaker. While his play style may not always be thrilling and eye-catching, he’s a consistent player.

“He’s not a flashy guy who’s going to impress you in a weekend or a week-long camp,” Gadowsky said. “He’s a guy that when you see him and are around him day in and day out, his consistency is what really impresses you in the end. I think that that will be his M.O. He’s going to be a part of a team, they’re going to see how consistent of a performer he is and how low risk he is, and with time his stock will always rise.”

The Los Angeles Kings are hoping that last statement will ring true in the coming years. The 2017 draft was very talent heavy, not only in the first round, but the later rounds as well. Picked in the fifth round alongside Hults were other big college hockey names Tyler Inamoto (Wisconsin, Florida – 133rd pick) and Noah Cates (UMD, Philadelphia – 137th pick). To an L.A. team on the verge of a complete rebuild, Hults could be a key tool in years to come.

Kings amateur scout Tony Gasparini, told with the LA Kings Insider in November 2017, “He’s got very good natural feel and ability to make plays with the puck in all three zones. And he has a tremendous amount of poise that goes along with that.”

“He’s a really good kid,” Gasparini continued. “And having had the opportunity to watch him play the last two years in the USHL and then this season right now, he’s making the necessary strides towards one day becoming a pro.”

Hults seems to be progressing well since then. Along with his stats, most recently, he helped Penn State advance to the semifinals of the Big Ten tournament with a goal in the 4-3 overtime Game 3 win against Wisconsin. After an offensive zone faceoff win, Hults netted a wrist shot from the blue line in the biggest game of Penn State’s season. He will continue to play a key role in Penn State’s 2019 postseason and most likely next year as well.

In Gadowsky’s opinion, Hults doesn’t necessarily need to change or add anything to his game; he just needs to improve the tools that he already has.

Hults will likely return to LA for his third development camp this summer before heading back to State College for his junior season. If he continues trending in the way that he is, it could be sooner than later that he’s wearing a Kings sweater.

This article is about:
Features NCAA NHL Prospects
Scoring Leaders 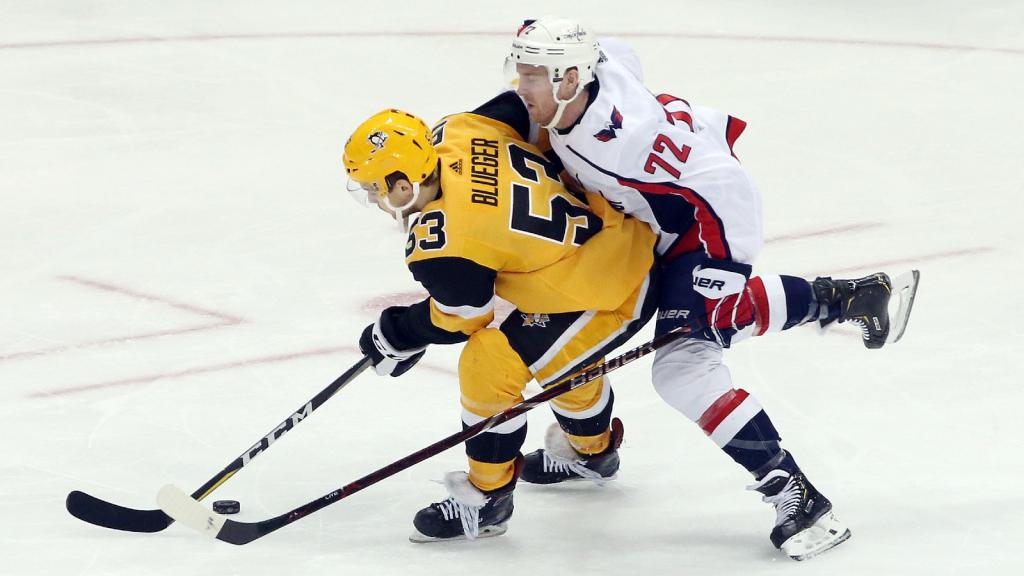