Long a steady supplier of elite talent to the Nashville Predators, the Admirals had drifted through much of this season in the highly competitive Central Division’s lower tier. After missing the Calder Cup Playoffs last season, the Admirals had blitzed through October at 8-1-1-0 only to drop six of their next seven games and start a long period adrift.

Milwaukee won 17 of the next 53 games (17-23-12-1) in a long period extending more than four months. But the Admirals did manage to pick off points even in the absence of victories. They have 13 overtime losses, the most in the AHL this season, but they helped Milwaukee to keep the Central Division playoff line within sight even as those losses accumulated.

The Admirals took their time, but they arrived in calmer waters in the second half of March. Milwaukee will take an eight-game point streak (6-0-1-1) into play this week and in control of a playoff spot. Aided in no small part by the Iowa Wild’s five-game losing streak, Milwaukee has moved into fourth place in the Central Division at 77 points and is within three points of third-place Iowa.

Milwaukee still has the Texas Stars hounding them. Fifth in the Central Division, Texas also has 77 points. Pursuing them are the Manitoba Moose (74 points) and the Rockford IceHogs (74 points). But the Admirals took three consecutive meetings against Rockford and then finished off a four-game road stretch with back-to-back wins this past weekend.

Nashville top prospect Eeli Tolvanen has heated up along with the rest of the Admirals lately. The Predators selected Tolvanen 30th overall in the 2017 NHL Draft before he spent last season in the KHL with Jokerit, going 19-17-36 in 49 regular-season games. There was some public speculation whether he would play another season in Helsinki, but he opted to make the jump to North America and play in Milwaukee as a 19-year-old.

After 10 goals in his first 45 games, Tolvanen has broken loose and struck four times in his past seven outings while also adding three assists. He chipped in two goals in the Admirals’ 4-2 road win against the Western Conference-leading Chicago Wolves this past Saturday night. Possessing a good shot, Tolvanen has averaged 4.1 shots in his past seven games. In all, he is up to 14-15-29 in 52 games for the Admirals.

Playing alongside Tolvanen has been recent addition Adam Helewka, who holds the Milwaukee scoring lead (18-27-45 in 60 games) by one point over forward Anthony Richard. Back on February 8th as the Admirals continued to drift, Nashville acquired Helewka and Laurent Dauphin from the Arizona Coyotes for forward Emil Pettersson.

Coming off a strong performance with the Tucson Roadrunners, Helewka, 23, continued that in Milwaukee. He has delivered with a 5-9-14 performance in 19 games for the Admirals and bears watching as a possible fit for Nashville at some point. Dauphin, who turned 24 last week, has bounced between three NHL organizations since the start of the 2017-18 season, but he has offered 4-8-12 in 21 games for the Admirals after moving over from Tucson.

Through the years Nashville has excelled at finding less-heralded talent via the NHL Draft, and Richard is trending in that same direction. Taken in the fourth round in 2015, the 22-year-old Richard is exhibiting steady growth as a third-year pro. He broke through with 19 goals last season and this season has reached a team-leading 22 in 67 games so far. Another 2015 fourth-rounder showing real potential is third-year pro Alexandre Carrier, a key part of the Milwaukee blue line.

Development in Milwaukee has been a key part of Nashville’s sustained success. This is a farm system that has produced Pekka Rinne and Juuse Saros in net along with blueliners Roman Josi, Shea Weber, Mattias Ekholm, and Ryan Suter through the years. Forwards Viktor Arvidsson, Filip Forsberg, Kevin Fiala, Colton Sissons are among the Milwaukee alumni now in Nashville. That alumni list also counts Martin Erat, Patric Hörnqvist, Scottie Upshall, and Jordin Tootoo among many others.

Before missing the postseason in 2018, the Admirals had qualified in 14 of the previous 15 seasons.

To resume that run of success this season, Milwaukee still has work to do. After hosting the San Antonio Rampage on Wednesday and the Wolves on Friday, they have the Wild in town on Saturday night. They also have two dates with Rockford remaining.

NEW STARS IN TEXAS
Texas goaltender Jake Oettinger had a successful pro debut this past Saturday night at Iowa, taking a critical 4-1 win with a 23-save performance.

The win gave the Stars a two-game sweep in Iowa as they continue their chase for a Central Division playoff spot. They went to Game 7 of the Calder Cup final last season.

Oettinger, 20, chose to turn pro after his NCAA season at Boston University ended and agreed to a three-year entry-level deal with the parent Dallas Stars. He went to Dallas as the 26th pick in the 2017 NHL Draft.

With Landon Bow still on recall to Dallas, Oettinger could earn more playing time as he teams with Philippe Desrosiers. Texas has five games remaining, starting with a key two-game series at home against the IceHogs this weekend.

Oettinger is not the only new face on the Texas roster. Dallas signed 2018 fifth-round pick Riley Damiani to a three-year entry-level deal and assigned him to Texas. The 18-year-old forward spent this season in the OHL with the Kitchener Rangers and finished 10th in OHL scoring (30-55-85 in 58 games). Kitchener was eliminated by the Guelph Storm in a first-round sweep.

ELSEWHERE
Also on his way to the AHL is another first-round Boston University product, forward Shane Bowers. He will join the Colorado Eagles on an amateur tryout deal after signing a three-year NHL entry-level contract with the parent Colorado Avalanche that will start next season. He was part of the Matt Duchene trade in November 17 after being selected 28th overall by the Ottawa Senators in the 2017 NHL Draft. He was 11-10-21 this season with the Terriers.

Stockton Heat defenseman Juuso Välimäki is on his way back to the Calgary Flames after a strong run in the AHL. Calgary recalled the 20-year-old, the 16th pick in the 2017 NHL Draft, from Stockton on Monday morning. He was 4-10-14 in 20 games for the Heat after being assigned to the AHL on January 23rd. Before that assignment he had played 22 games for Calgary as a rookie out of the WHL. Välimäki’s goal with 13 seconds to go in regulation gave the Heat a 2-1 road win against the San Diego Gulls this past Saturday night.

Toronto Marlies forward Jeremy Bracco is in a tie for the AHL scoring lead with Carter Verhaeghe of the Syracuse Crunch. Bracco is 20-55-75 while Verhaeghe, a one-time Toronto Maple Leafs prospect, is 30-45-75.

Intriguing QMJHL forward Vladislav Kotkov has joined the Barracuda from the Chicoutimi Sagueneens. Signed by the parent San Jose Sharks as an undrafted development camp invitee, the 19-year-old had 34 goals (34-27-61) for Chicoutimi this season.

The Lehigh Valley Phantoms have brought in Hamilton Bulldogs captain Matthew Strome. Taken in the fourth round of the 2017 NHL Draft by the Philadelphia Flyers, Strome hit an OHL career-high this season with the Bulldogs with 79 points (28-51-79) in 68 games.

Rockford has added Red Deer Rebels forward Brandon Hagel after an excellent WHL season. He piled up 102 points (41-61-102) in 66 games. Chosen in the sixth round of the 2016 NHL Draft by the Buffalo Sabres, he was not signed. The parent Chicago Blackhawks signed him to an entry-level contract earlier this season. Rockford also will have another Red Deer forward with 20-year-old Reese Johnson arriving on a tryout deal. He was 27-26-53 in 67 games as Red Deer captain. 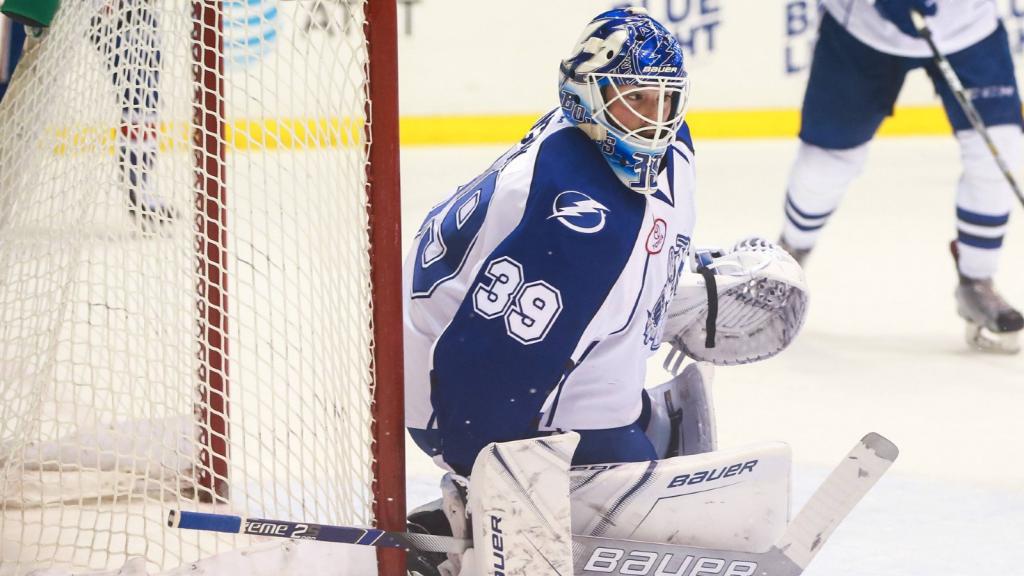 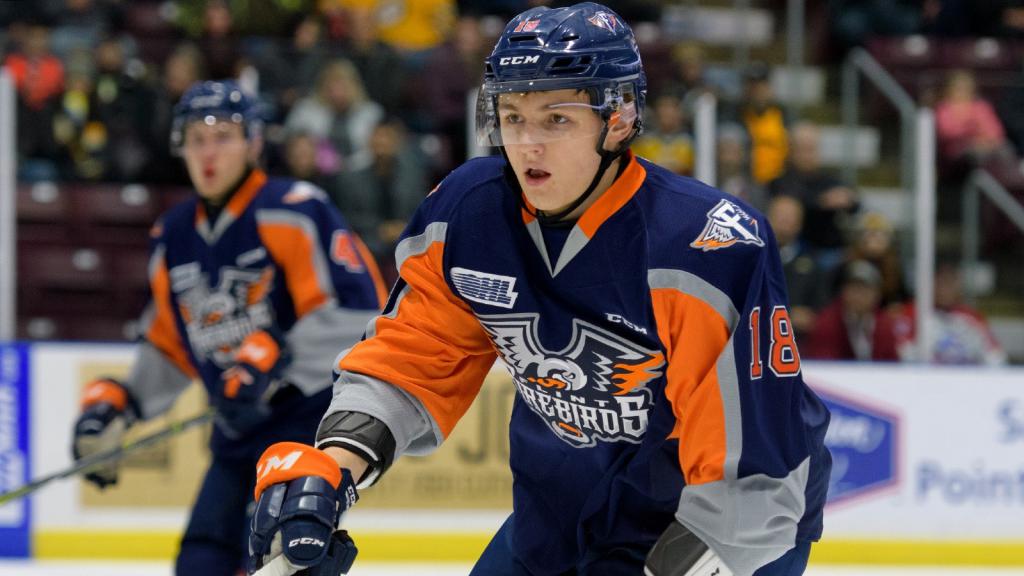