Weekends mean a busy AHL schedule. EP Rinkside has this look around the NHL’s top developmental league to set you up for this weekend’s slate.

CRUNCH (AMERKS?) TIME IS BEARING DOWN ON THE MARLIES
Toronto Marlies head coach Sheldon Keefe apparently has had enough of his team’s inconsistency with the Calder Cup Playoffs two weeks away.

Keefe, who took the Marlies to a Calder Cup championship last season, did not spare his players’ feelings after a 3-0 home loss to the Hershey Bears at Coca-Cola Coliseum.

“The way we played [against Hershey], we look like a team that doesn’t want anything to do with the playoffs,” Keefe said to Toronto reporters after the game. “We’ve got to make a decision here that this is important, and we’ve got to find a way to play a lot better.”

“We have to take the lesson. Hershey was ready to play. They play fast and hard and competitive. We weren’t ready for that. We weren’t prepared for that.”

“Our guys didn’t seem willing to compete within that type of an environment.”

At 37-23-7-4 and third place in the North Division, the Marlies find themselves on course for a first-round playoff meeting with either the Rochester Americans or Syracuse Crunch. Toronto would not have home-ice advantage against either opponent, at least as the standings sit going into play this weekend. They also still have the fourth-place Cleveland Monsters lurking six points behind them, with the fifth-place Belleville Senators trailing Toronto by seven points. Toronto yields a game in hand to Cleveland.

Toronto fell behind to the Bears, 1-0, in the opening 1:18. From there, Hershey added to the lead with a pair of goals 14 seconds apart later in the period. That third Hershey goal chased Marlies starter Michael Hutchinson and brought Kasper Kaskisuo in relief.

Any sort of response that Keefe hoped for never arrived after that. The Marlies managed five second-period shots, three more in the final period, and finished with 17 shots.

The Marlies have lost three of their past five games, with all of those defeats coming at home.

Playoff-wise, the Marlies are still in a comfortable position and can clinch a playoff berth on Friday night against the Utica Comets. The Marlies lost Hutchinson on recall to the Toronto Maple Leafs going into play this weekend, however.

But after the Comets and Binghamton Devils this weekend, they face a challenging final week of the regular season. They have a home-and-home series against Belleville, a team that has frustrated the Marlies all season. Then they close out their schedule at home to Cleveland. Meanwhile, the Belleville-Cleveland playoff chase could come down to the final weekend of the regular season; so even if the Marlies do clinch a playoff spot, they could very well be facing one, if not two, absolutely desperate opponents next week.

Keefe knows first-hand the importance of hitting the postseason at full-speed. The AHL’s best-of-five first-round format does not allow for much of a feeling-out process once the postseason arrives. The Marlies learned that lesson last season, nearly seeing a fantastic regular season fizzle before they managed to finally wrestle down a first-round series win in an elimination game.

Last season the Marlies had home-ice advantage and a lower-seeded opponent for that first-round elimination game. Along with the lack of home-ice advantage against Rochester or Syracuse, the Crunch rank second in the AHL while the Amerks hold down fourth overall. Toronto had a winning record against Syracuse in the season series this season, but the Marlies won only once against Rochester. The Amerks also swept the Marlies in consecutive games in Toronto two weekends ago.

With the Marlies packing to hit the road after the loss, Keefe was not done with his critique to the Toronto media.

“We’re going to have to make the decision on this bus trip just how important these games are,” he said.

In fact, it has now grown to five teams with the Iowa Wild further clogging the standings. Those five teams are separated by five points as they battle for what will likely only be two available playoff spots.

Third-place Iowa is at 81 points with the fourth-place Manitoba Moose behind them at 79 points. Iowa had challenged for the Central Division lead as recently as mid-March, but seven losses in a row (0-6-1-0) have put the Wild’s playoff chances in danger. The Milwaukee Admirals also have 79 points but are in fifth place. Next are the Texas Stars (77 points) and the Rockford IceHogs (76 points). Texas hosts the IceHogs in back-to-back games this weekend.

Manitoba will stay at home after sweeping the Pacific Division-leading Bakersfield Condors in a pair of games earlier this week. They have the Stockton Heat in for two weekend dates. Milwaukee hosts the Western Conference-leading Chicago Wolves on Friday night before the Wild visit Milwaukee a night later.

The Pacific Division has similar congestion. The second-place San Jose Barracuda have 77 points. In third place are the San Diego Gulls with 75 points. The fourth-place Tucson Roadrunners have 74 points while the Colorado Eagles are one point below the playoff line at 73 points.

Tucson’s wild late season continued this week with a two-game road sweep of Iowa. They have gone from a four-point lead on a playoff spot to 11 points down and back to this one-point advantage. The Roadrunners are on a six-game point streak (5-0-0-1) and are off until Sunday when they visit the Ontario Reign. The Eagles visit the Wolves for back-to-back games. San Jose has two home games while San Diego only plays once this weekend, also at home.

HELP IS ON THE WAY
Reinforcements are arriving for the Wilkes-Barre/Scranton Penguins as they bid to extend their playoff streak to a 17th season.

Three points out of a playoff spot after a big road win at the Bridgeport Sound Tigers earlier this week, Wilkes-Barre/Scranton hosts Binghamton on Friday night before a pair of road games against the Lehigh Valley Phantoms.

Pittsburgh selected Drozg, 20, in the fifth round of the 2017 NHL Draft. He went 21-41-62 for the Shawinigan Cataractes in QMJHL play before finishing 4-2-6 in six playoff games. He also represented Slovenia at the IIHF World Junior Championship D1B under-20 tournament. His 4-8-12 in five games led the tournament. Slovenia won the event and earned promotion for next season.

Bellerive, who turns 20 in May, has spent four WHL seasons with the Lethbridge Hurricanes, captaining the team in each of the past two seasons. He was 33-50-83 in the regular season before a 2-6-8 first-round performance in which Lethbridge was eliminated in seven games.

These latest arrivals give Wilkes-Barre/Scranton 36 players on their roster.

AROUND THE A
The 104-point Charlotte Checkers could clinch the Macgregor Kilpatrick Trophy (best regular-season record) if Syracuse loses in any fashion at Rochester and the Wolves are defeated in any manner on the road by Milwaukee. It would be the Carolina Hurricanes organization’s first AHL regular-season title since 1984-85 when the Binghamton Whalers had a 112-point performance. Charlotte hosts the Springfield Thunderbirds in a pair of weekend home games.

Bridgeport and the Grand Rapids Griffins also could enter the AHL playoff field on Friday. They would join Charlotte, Rochester, Syracuse, Bakersfield, and the Wolves.

The Wolves’ magic number to clinch both a division and Western Conference regular-season title is down to four thanks to their recent 9-2-0-1 charge. They have been without leading scorer Daniel Carr (30-41-71) through those 12 games after he was injured by an open-ice hit March 5th against the San Antonio Rampage. The Wolves have also gone without top forwards Brooks Macek (26-34-60) for the past six games and Gage Quinney (17-23-40) for the past five games.

However, the Wolves now have received top Vegas Golden Knights prospect Cody Glass. The Golden Knights made Glass the sixth overall pick in the 2017 NHL Draft. An injury limited the 20-year-old forward to 38 WHL games with the Portland Winterhawks, but he had 15-54-69. He managed to return for Portland’s final playoff game as well.

Several teams have busy weekends. Along with the Wolves playing their second consecutive 3-in-3 weekend, other teams facing three-game weekends are THE Providence Bruins, Binghamton, Wilkes-Barre/Scranton, and Utica.

THIS WEEKEND
Friday – Syracuse at Rochester: The battle for the North Division title may gain some clarity this weekend as these teams start a home-and-home series.

Saturday – Cleveland at Belleville: This match-up could very well determine who takes the fourth playoff spot in the North Division.

Sunday – Colorado at Chicago: With only four remaining games going into this weekend and sitting outside of the playoffs, the Eagles have little margin for error. Back-to-back contests with the Wolves make that task even more difficult.

ON THE MOVE
Cleveland will be without forward Alexandre Texier and defenseman Adam Clendening for at least Friday night’s game at the Laval Rocket….Through Thursday, 104 AHL players have made their NHL debuts this season. 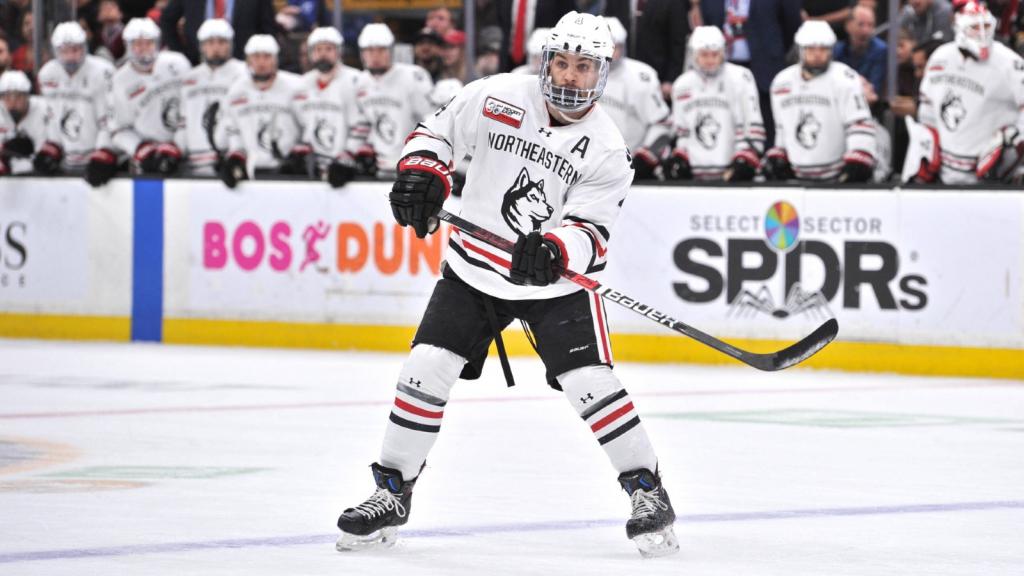 Next article BURKE: What will the New Jersey Devils get from Jeremy Davies?