The Providence Bruins, who own the AHL’s longest-running affiliation, continue to blend development and winning that have fuelled years of NHL success for the parent Boston Bruins.

This season’s Boston roster features recent Providence graduates Jake DeBrusk, Sean Kuraly, Karson Kuhlman, plus blueliners Connor Clifton and Matt Grzelcyk. Go further back, and that list expands to David Krejci, Brad Marchand, and Tuukka Rask. Even Patrice Bergeron spent a season in Providence during the 2004-05 NHL lockout, and David Pastrnak had a limited run with the P-Bruins as well. That steady replenishment of roster depth has helped Boston to be an annual contender, including a trip to Game 7 of the Stanley Cup Final this past June.

Those players have developed within a winning framework an hour south in Rhode Island, where the Boston-Providence affiliation begins its 28th season in a relationship that dates to the 1992-93 season. Providence has put together seven consecutive trips to the Calder Cup Playoffs; last season the Bruins fell in the first round to the eventual Calder Cup champion Charlotte Checkers (Carolina Hurricanes) after a 38-27-8-3 regular season.

More help could be Boston-bound amid a deep group of prospects playing for head coach Jay Leach, who is starting his third season in that role with Providence. His P-Bruins took back-to-back road wins to open the regular season this past weekend and will open their home schedule on Saturday night against the Rochester Americans (Buffalo Sabres).

“It’s always an adventure early on in the season, especially with a younger group,” Leach said. “You never really know what you’ve got. It’s a classic youthful team with energy and speed.”

Much of an AHL head coach’s job involves breaking habits that players developed playing at lower levels before turning pro. Top prospects who played heavy minutes at the CHL or NCAA levels and had to manage their energy there find that such an approach is not acceptable in the pro game.

Leach singled out goaltenders Dan Vladar and Max Lagacé for praise. Vladar is a 22-year-old taken in the third round of the 2015 NHL Draft who could take a bigger role with Zane McIntyre leaving to join the Vancouver Canucks organization in the offseason. Lagacé shut out the Lehigh Valley Phantoms (Philadelphia Flyers), 3-0, in the season opener after signing with Boston from the Vegas Golden Knights this past summer.

But Leach’s blue line bears plenty of promise as well. Urho Vaakanainen, the 18th pick in the 2018 NHL Draft, begins his second pro season. Jakub Zboril, chosen 13th overall in the 2015 NHL Draft, is starting his third pro season. Fellow 2015 pick Jérémy Lauzon, who went in the second round that year, joins Zboril.

“We’re trying to push the offence with them, and at the next level we’ll do the same, but we want them to get pucks, get up the ice and get going. At the same time, we want to make sure that they’re squashing [opposing] plays with their sticks and their feet.”

“[Lauzon], has great feet, but he brings a bit more sandpaper again every night. So, he’ll be relied upon with a penalty kill, [competing] down low, playing that straightforward first-pass game.”

Boston may have also unearthed overlooked talent in undrafted rookie Cooper Zech, who turned pro after one NCAA season at Ferris State. Zech, 20, led the NCAA in points by a rookie defenceman (8-28-36), which earned him the WCHA Rookie of the Year award. He also won spots on the WCHA’s All-Rookie Team and First All-Star Team.

Blend that group with established pros Chris Breen, Josiah Didier, and Alex Petrovic, and the P-Bruins are in good shape.

“Our back end is a bit more proven,” Leach said.

While Leach’s back end has experience, his forwards’ mobility impresses him.

“[The forwards have] got some young legs that should give us some speed and allow us to play four lines. Hopefully we can overwhelm teams with our four lines.”

That group includes first-round talent in Trent Frederic, who was 14-11-25 in 55 regular-season games as a P-Bruins rookie. Boston took him 29th overall in the 2016 NHL Draft.

Other returning faces up front are Peter Cehlárik, Ryan Fitzgerald, Cameron Hughes, and Joona Koppanen. Veteran Paul Carey, who buried 22 goals in 30 regular-season games after a midseason trade from the Ottawa Senators, is back to provide dependable offence and serve as Providence’s new captain.

Another returnee is Zach Senyshyn, the 15th pick in the 2015 NHL Draft, who is starting a critical third pro season in his development. The 22-year-old was 14-10-24 in 66 regular-season games as a second-year pro with the P-Bruins last season.

“He’s continuing to work,” Leach said. “He’s like a lot of guys – they’re finding their game. He has got speed. He’s able to get in on forechecks. To score, he’s just got to continue to get to the net. He’s got to continue to own that puck and attack.”

Also joining Providence is 20-year-old rookie Jack Studnicka, a second-round pick (53rd) in 2017. He put up 83 points (36-47-83) in 60 regular-season OHL games between the Oshawa Generals and Niagara IceDogs.

Studnicka has made an early impression on Leach.

“He’s tenacious,” Leach said. “He’s got that fire inside of him that wants to make a difference. He has got speed and is relatively strong, I [think], for a young kid. Yeah, he’s going to need to gain some weight, but he can make plays.”

“He’s one of those players that we’ve seen where sometimes you won’t notice him a whole lot out there and then all of a sudden he has 1-1.”

Forward Anders Bjork, 23, is back in the Providence line-up after each of his first two pro seasons were wrecked by shoulder injuries. He chipped in a goal along with an assist in his opening weekend. Boston also signed Vancouver reclamation project Brendan Gaunce, who has started 2-1-3 with the P-Bruins and can be an NHL recall option.

Boston also has brought in forwards Oskar Steen (Färjestad – SHL), Jakub Lauko (Rouyn-Noranda – QMJHL), and Pavel Shen (Ufa – KHL).
Steen had 17-20-37 in 43 regular-season games last season before shifting to North America. Leach has been working them into his line-up with multiple moving pieces as the roster settles. Shen played with six different wingers in his first two games.

“It’s a little bit of that trial by fire,” Leach explained. “I pity the guy who’s actually tracking [my lines]. You try to find what works.”

“[Lauko] has speed],” Leach said of the 2018 third-rounder who made the Providence roster at age 19.

“[Shen] really was an unknown who just got over here, and he’s had a quick adjustment to the program and actually improved daily. A guy like [Shen], he’s showing more ability offensively than I was under the impression [he had]. So, I surely don’t want to limit that. I’m trying to find fits for him.”

The Boston-Providence assembly line has long gone beyond on-ice talent.

Leach, who played 12 pro seasons, is following that same path.

“I’m able to roll with the punches a little bit more,” he self-assessed. “You have to really think on the fly here. I can’t say I’m perfect at it. But I certainly am able to do a bit more of that.”

“And I think the other thing I’ve learned is that I’ve got to push players nightly to get them to that next level. That next level is obviously the best league in the world. And these players have to perform consistently every night to be able to [stick in the NHL]. So, it’s on me to set that standard, and hopefully I’m learning to do that a little bit better.”

HANGING UP THE SKATES

Leighton played 15 of those seasons in the AHL after the Chicago Blackhawks took him in the sixth round of the 1999 NHL Draft. He went on to play 507 regular-season games in the AHL (seventh in AHL goaltending history) and went 250-186-50. Those 250 victories place him fifth on the AHL’s all-time list, and he also is first in league history with 50 shutouts in the regular season.

In addition, Leighton was a member of the AHL All-Rookie Team in 2001-02, appeared five times at the AHL All-Star Classic, and won the Aldege “Baz” Bastien Memorial Award (top goaltender) in 2007-08. That season he set an AHL playoff record with 98 saves in a five-overtime loss.

Leighton also found some NHL success, playing 110 games with four teams and posting 37-43-14 | 2.98 | .900 with four shutouts. His highwater mark came in 2010 when he played 14 playoff games with the Philadelphia Flyers on their run to the Stanley Cup Final.

Los Angeles Kings goaltending prospect Cal Petersen continues excel amid a deluge of pucks sent his way. The AHL named the 24-year-old Ontario Reign netminder its CCM/AHL Player of the Week after he took the Reign to a pair of season-opening victories and stopped 83 of 85 shots for a .976 save percentage. He shut out the San Jose Barracuda (San Jose Sharks) on 41 saves in the season opener at Toyota Arena before taking the Reign on the road and pulling out a 3-2 overtime win against the Bakersfield Condors (Edmonton Oilers) with 42 stops. Last season he faced nearly 39 shots per game with the Reign, who finished last in the AHL. Drafted by the Buffalo Sabres in the fifth round of the 2013 NHL Draft, Petersen continues to push for a job in Los Angeles in his third pro season. Injuries to Jonathan Quick and Jack Campbell last season pressed him into the NHL, where he went 5-4-1 | 2.61 | .924 in 11 games for the Kings.

Syracuse Crunch head coach Benoit Groulx could have a family member in the AHL soon. His 19-year-old son, Halifax Mooseheads centre Benoit-Olivier Groulx, signed a three-year entry-level deal with the Anaheim Ducks on Thursday. Groulx went to Anaheim in the second round of the 2018 NHL Draft, 54th overall. He earned a spot on the Memorial Cup All-Star Team this past spring with host Halifax and had a 4-8-12 performance in 10 playoff games. That followed a regular season in which he hit 31-49-80 with the Mooseheads. The younger Groulx’s deal could put him with Anaheim’s AHL affiliate, the San Diego Gulls, later this season after Halifax’s season has concluded.

Opening weekend in the AHL featured two notable healthy scratches following lacklustre debuts. The Hartford Wolf Pack (New York Rangers) sat top forward prospect Vitali Kravtsov in their second game. Kravtsov, 19, went to the Rangers as the ninth pick in the 2018 NHL Draft. Hershey Bears defenceman Lucas Johansen also did not dress for his team’s second game; the parent Washington Capitals took him in the first round of the 2016 NHL Draft at the 28th spot.

As AHL rosters continue to settle, EliteProspects.com has crunched some numbers. Of the 817 players on AHL roster, 47.4 per cent are Canadian, and 15 countries are represented. Rochester has the oldest roster on average at 25.3 years old while the Barracuda’s 22.5 average is the league’s youngest. Amerks defenceman Nathan Paetsch, 36, is the league’s oldest player.

Providence’s deep line-up prompted Boston management to assign 19-year-old defenceman Axel Andersson to the QMJHL’s Moncton Wildcats. He began the season on the Providence roster after spending last season in the Allsvenskan League with Södertälje. Boston selected him in the second round (57th) of the 2018 NHL Draft.

The Checkers raise their Calder Cup banner on Friday night in their home opener against the Bridgeport Sound Tigers (New York Islanders). Charlotte won 51 regular-season games and had a league-high 110 points before marching through the postseason with a 15-4 record that finished with a five-game Calder Cup Final against the Chicago Wolves (Vegas Golden Knights). Only 11 players remain from last season after several offseason departures via free-agency, trades, and NHL promotions. Head coach Mike Vellucci also left the organization to join the Pittsburgh Penguins organization, where he is now the general manager and head coach of the Wilkes-Barre/Scranton Penguins. 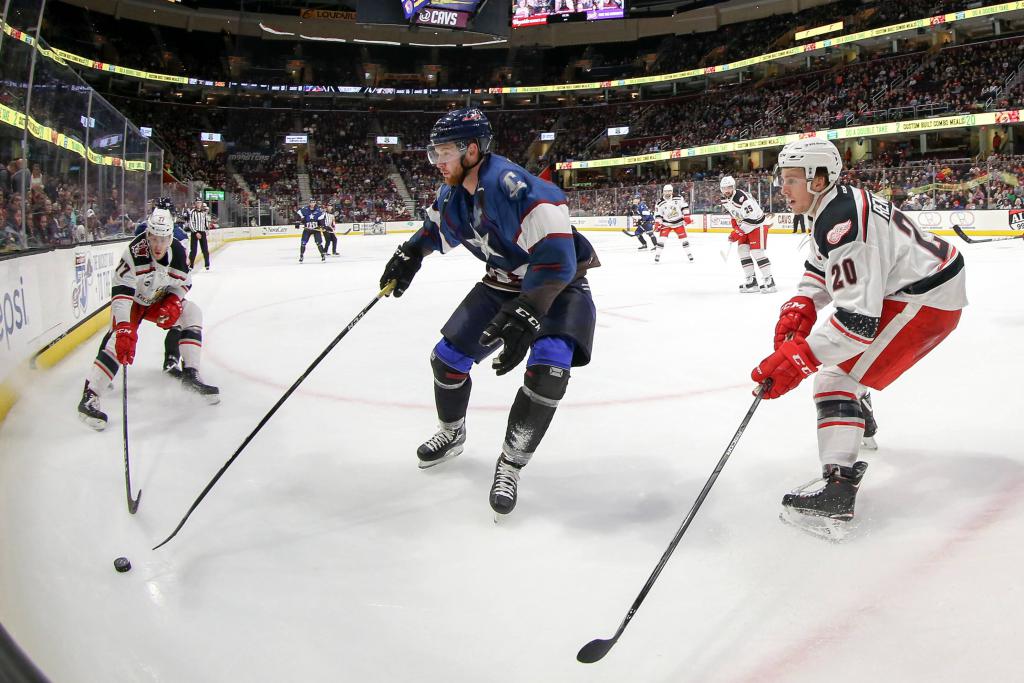 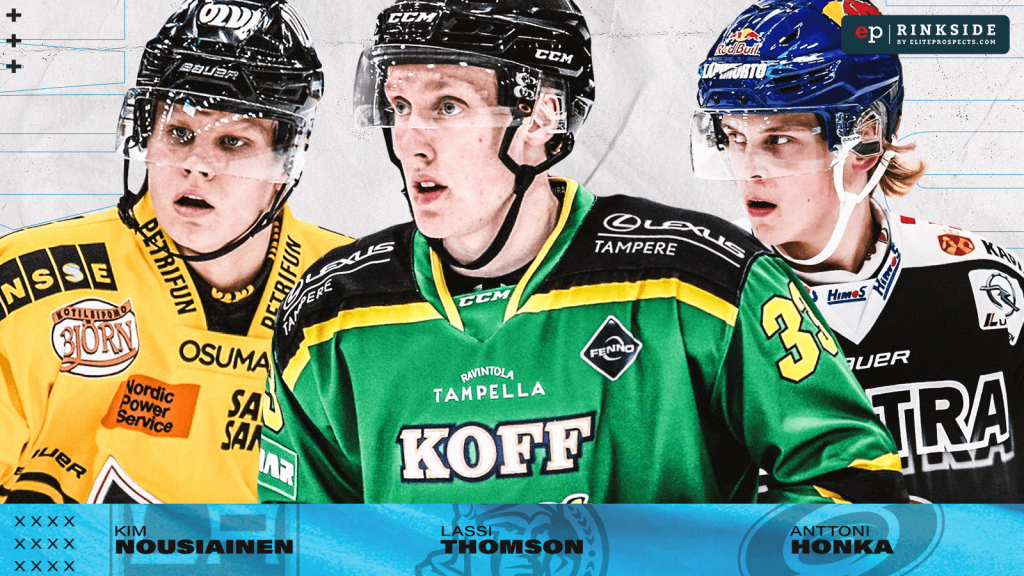 Next article Scouting Report: Checking in on Finnish Defence Prospects in Liiga Action