COHEN: Has Caufield moved into the Top 15?

Cole Caufield is a 5-7, 170-ish pound member of the NTDP.  He has some great teammates on that team including Alex Turcotte and Jack Hughes. He’s always the third name mentioned, and that’s fine, but he’s elevated his play to the point that a Top 15 selection is possible in the 2019 NHL Draft in Vancouver.

His speed is good enough to play with Hughes and create and score with him so no problem there. His creativity is elevated depending on his linemates. His ability to keep moving the puck forward and rarely turn it over is another reason he’s piling up the points. In his first 43 games, he has 36 goals and 55 points. Turcotte and Hughes have more points per game and Trevor Zegras have the most points but that doesn’t diminish Caufield’s season.  Last year he was getting warmed up and now this year he’s one of the elite teams’ best players.

Some may question the level of competition he plays against but last season in tournament play he had 19 points in 13 games. 12 of them were goals. He’s a goal scorer. He’ll score against any play at any level, just give him some time to get the lay of the land. He’s used to playing against the best and being one of the best players. His compete level is massive. He’s always engaged.

Last summer the Mosinee, Wisconsin native committed to the University of Wisconsin. Turcotte has committed there as well so the future is very bright for that program. The Caufield family all played hockey at a competitive level but Cole and his older brother, Brock, have gone the farthest so far. Brock had a nice season at the University of Wisconsin and next year the two will be reunited. That path will start in September of 2019. After his current season ends, he’ll be preparing for the NHL Combine and Draft.

Caufield is a natural winger who is a relentless offensive player. He will battle, fight for loose pucks and use his body when necessary. He’s driven to score. He’s a natural goal scorer who has the hockey sense to bank one off a goalie who’s strayed too far from the crease or he can pick that top corner the netminder thinks he has covered until the puck is in the back of the net. He’s dangerous around the net and he’s always got his stick down. He follows up shots very well and some of those turn into goals. He can calm down that rolling puck, settle it, and get a goal.

In the NTDP record book, Caufield already passed a legend in Patrick Kane for goals. Nobody is saying Caufield is Kane, having seen both of them at this young age, I still give Kane the nod. Still, Caufield reached the 85-goal mark at the time and has his sights set on passing Phil Kessel who has the record with 104. Whether he gets the all-time record or not, he has carved out a legacy in the program and that will follow him in a very positive way for the rest of his career.

So, are there a few teams who will fall around 15 that will be willing to take Caufield? I think so. I think by the end of the season he could nudge his way a bit further but only time will tell. The draft is a weird animal because teams follow their boards, there are trades and then there are always players who drop and others who get picked earlier than expected.

Another solid part about Caufield’s game is he doesn’t take too many penalties. He had 30 minutes this season in his first 43 games. He matches up against top players and he doesn’t end up in the box.

Caufield has the mental side of the game down. He is a guy that gives you everything he has every shift, but he also has the ability to keep giving you that consistency shift after shift. That’s how you get to the next level and that’s how you have a long NHL career. All indications are he will do just that.

The NTDP will have quite a few first rounders in this year’s draft. He will definitely be one of them. It’s a lock. I suspect when the various scouting services update their lists, he will be listed higher than the last. We’ve all heard “Lose for Hughes” there is no catchy phrase to lose to get Caufield.

I don’t expect Caufield to play right away in the NHL. Let him continue to get faster and stronger in college. It’s the perfect place to do that and after a year or two, the team that drafts this winger can see where’s he’s at. 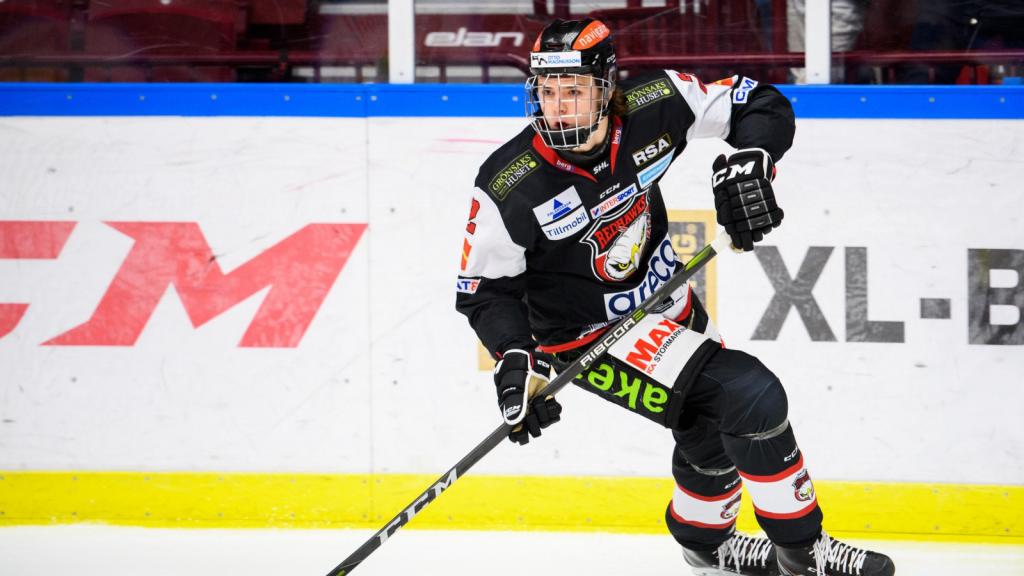 Next article BLOG: Grans, Andrae and Olausson standouts for Sweden at U17 tournament