Cam York has been playing for the United States National Team Development Program (USNTDP) since 2017-18. He’s a 5-11, 180-pound defenseman who, so far, sits outside of the top Top 10 for the upcoming 2019 NHL Draft in most people’s minds and scouting services.

But can he slip into the Top 10 before it’s all said and done?

The California native isn’t a laid-back dude, as most Californians are stereotyped in the cinema. He’s actually the opposite of that on the ice. While being a very disciplined defenseman, who stays out of the penalty box, he doesn’t shy away from contact. When he gets bigger and stronger this part of his game should pick up. Is this the reason he’s outside the Top 10?

What about his skating?

I’ve never heard any complaints. He’s not elite but still a very good skater. He has no problem getting up the ice quickly and keeping the offense moving for his team. So that’s not it.

Is it his shot?

I’ve found it to be good. I’ve seen a nice, easy wrist shot that gets on net. It’s not the hardest, the prettiest, it’s just effective. Getting it through traffic and on net is half the battle. Rebounds and deflections are two great ways for his teammates to get goals. When the puck gets there quickly, the goalie has to react and then some rebounds occur. I think this is all you need to be successful, but ok, he’s not flashy with his shot.

He’s more than a puck mover. He’s fully capable of being a power play quarterback. He’s very smooth out there and his passing is very accurate. He makes good decisions and doesn’t have indecisive moments. He’s on an elite team and his power play skills will translate forward. So, it’s not that.

He plays the penalty kill the way it should be played. Smart, efficient, good, safe clears. He’s a blueliner that has more than just offensive talent and that should bode well for him this June in Vancouver.

How’s his first pass? It’s really good, it has some mustard on it and it’s accurate. Will it get even better? That’s the hope. What you see today for most defenseman will change over time with different coaching and more experience. This year he’s playing with a ton of confidence that he will definitely carry forward.

Coaches love him and he listens. He constantly remarks how good the coaching is and how he’s improving as a defenseman as a result. Players who are very coachable do very well when they already have a good base as a hockey player and York has that.

York knows when to move in close to try and get a goal. He has very good hockey sense. He’s not known for bad turnovers or bad decisions when a game is tight.

His gap control is very good on defense and he has an active stick. He has good closing speed as well. He will steal the puck and turn it into an offensive chance. Like most prospect rearguards he can get better in his own end but he’s already coming into this draft as a solid player in this part of his game. Sometimes it’s overlooked because of the terrific offensive accomplishments of his team.

York had a seven-point game this season – breaking an NTDP record in the process. One game doesn’t make the man, but it does show how he can get involved in the offense. No matter how you slice it a seven-point game for a defenseman is impressive at any level in any era. He’s not a right-handed shot if he was, would that get him in there?

On a team with Trevor Zegras, Jack Hughes, Cole Caufield, and Matthew Boldy he’s actually fifth on the team in scoring. At the 44-game mark, he had six goals and 30 helpers. He’s also a +27, one of the leaders of the team in that category as well.

This draft has some very talented defenseman. This article isn’t mean to demean them but rather shine a light on what Cam York does well and to see if he’s Top 10 material. I think there’s an argument to be made here.

What you learn after covering enough NHL drafts is that all it takes is one or two teams to identify York as “the guy”, they feel they can get him and many times they will take that player regardless where he falls on anybody else’s board but their own. In the end that’s the one that matters. Something tells me if York’s season ends on a strong note that there could be a team that would make him a Top 10 pick. There’s definitely a chance. That’s the fun of the draft is to wait and see how this unfolds.

It’s a cool reality show for the players, fans, media, and the teams.

You may also be interested in: COHEN: Who gets picked first, Hunter Jones or Spencer Knight? This article is about:
Features NHL Entry Draft 2019 NHL Prospects USNTDP Juniors USHL Cam York
Scoring Leaders 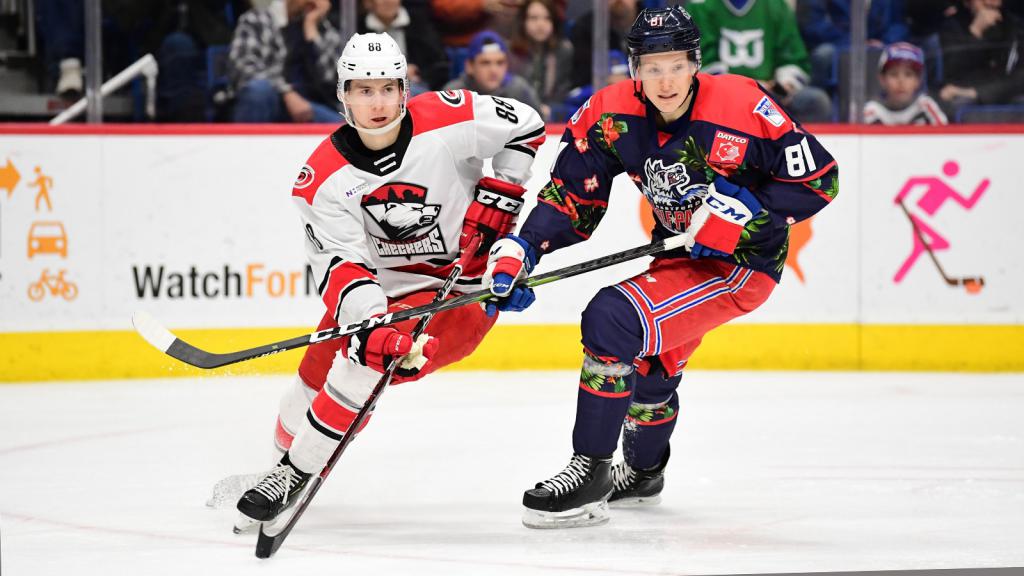 Next article AHL POWER RANKINGS: Setting the stage for the playoff drive