BROWN: Breaking Down Matthew Boldy and his Unique Backhand Talent

While the role of the backhand shot may be diminishing for most, the NHL’s best are still finding ways to integrate it into their every element of creating offence.

The backhand pass, meanwhile, has only increased in emphasis as a natural response to the lack of time and space created by a heightened emphasis in skating among defencemen. Assist artists like Connor McDavid, Aleksander Barkov, and Mitch Marner have perfected the craft.

These backhand skills are usually only shared by a handful of prospects each NHL Entry Draft — Matthew Boldy is one of them. A potential top ten pick, Boldy excels in this regard more so than any of his peers that will share the stage with him this June in Vancouver.

Take this ridiculous goal by Boldy at the under-18 World Junior Championship, for example. Boldy chips the puck over the defender’s stick on the backhand. Then, he handles the puck solely on the backhand before rifling a backhand shot just under the bar.

That goal is obviously an expression of high-end skill, but a closer examination shows just how many subtle layers and skills Boldy is employing on this play:

Here’s that same clip, with those four layers highlighted:

For many players, that’s their goal of the year. For Boldy? Maybe top five? Maybe? His highlight reel is extensive.

Every player in the NHL can control the puck on their backhand but being able to dangle through players on the backhand is a skill reserved for a handful of players. On the forehand, it’s much easier to bring the puck across your body — the top hand on the stick is free to move across the hips. On the backhand, the top hand gets locked next to the hip, which makes more difficult to return the puck to the forehand. Therefore every player predominantly handles on the forehand — it’s easier! But somehow, Boldy manages to take an awkward position for most and turn what would be a deficiency for most into a unique ability all his own.

Since the top hand stays next to the hip with a limited range of motion, body positioning also tends to change. Take this clip, for example. Since Boldy’s reaching out on the backhand, his shoulders turn away from the slot. He connects with his teammate by spotting him with peripheral vision. If he were on his forehand in that exact position, his shoulders would be facing his target, giving him a clear line of sight on the pass. That he has both the vision to spot his teammate from this position and the skill to connect makes this an all-world pass.

That clip also highlights one of Boldy’s most intriguing attributes, his unique hand-eye coordination. His hand-eye coordination is a well-known attribute, not just because of the flashy flicks and juggles we see in the clip above. He’s a puck thief on the backcheck, reaching in to smoothly steal the puck or even whacking down saucer passes. He also has displays of high-end skill and creativity just about every game. Here’s a fun one, where he flicks the puck into the air then bats it over the goalie’s shoulder on the backhand:

The benefits of having such high-end skill on the backhand are numerous. On his strong side or off hand? Doesn’t matter. Boldy’s backhand skill means he’s equally dangerous from both sides. The skill allows him to make passes while under pressure — when time is of the essence. Rather than having to switch to his forehand, he makes those passes directly on his backhand, maximizing his teammates’ window of opportunity to shoot. There’s no discernable difference between his ability to pass on his forehand and backhand — that is rare, it should almost go without saying.

The backhand deftness also masks his flaws. I’d argue that his lack of separation speed and average acceleration is less of a hindrance for Boldy than it would be for others, largely because of the opportunities his skill on the backhand can create.

Boldy can thrive along the boards, whereas players who share his deficiencies as a skater are most often doomed to failure. He’s powerful, driving his legs outwards to block defenders while using his upper body to throw them away. He’s also able to escape with his puck skill. In this sequence, Boldy receives the puck along the boards on his off hand with a defender pressuring him. Most players do one of two things here. They’ll either eat the puck along the boards or tap it down low. Boldy flicks the puck in the air on the backhand, whacks it down, and then makes an outstretched backhand feed across the slot. Oh, and he scores, too, with a backhander, in case you weren’t sure what was coming next.

Of course, Boldy’s not just making plays on his backhand. He’s also the owner of one of the draft’s better wrist shots, able to beat goaltenders cleanly with a plethora of tricks. He’ll change the angle on his shot with a toe drag or use a change of direction with his blade to deceive.

Boldy’s shot selection is a strength, choosing to load up for power when given space or shorten his release with pressure. His one-timer is lethal from range, and his deftness around goal make a legit threat from sharp angles. He can release his shot off either foot and in awkward positions without a noticeable loss of power. The accuracy of his shot wavers (USNTDP forward-low of 52% shots-on-target percent in a 14-game sample).

Boldy’s edges are easily his greatest strength as a skater, as he’s able to carve and twist through traffic on his inside and outside edges. He makes powerful, precise cuts, as he contorts his body, which allows him to exit with speed. When combined with his prowess as a stickhandler, Boldy easily separates from even strong defenders.

There were several stretches this season where Boldy failed to make much of an impression. Consistency is not an issue specific to Boldy, but to such an extent is an uncommon issue for a top-end prospect.

It would be easy to say he’s inconsistent and leave it at that. There are many reasons why a player is inconsistent, many of which are mental. I have no way of knowing if that is the case with Boldy, but I’ll try my best to highlight inconsistent play with on-ice play.

The most obvious indicator of Boldy’s inconsistent play is his insignificant transitional impact. Since transition is heavily linked to the surrounding talent, and this year’s iteration of the United States National Team Development Program is a historically stacked team, let’s look at efficiency-based metrics as opposed to volume-based (such as per-60). The chart below highlights three different ways I like to look at transition efficiency (relative to team):

So, why is Boldy generating negative results? I suspect there are two main reasons. First, he has a habit of over-handling the puck. He often slows down and makes an extra handle, resulting in a turnover or his teammates having to reset. Puck touches are infrequent in any given game. When a player isn’t making the most out of those touches, it’s easy to fall into the background.

The second and most significant issue is Boldy’s skating. Boldy’s agile but also lacks a separation gear. Players often catch him on the backcheck and he lacks the quickness to evade when pressured in the defensive zone. His skating mechanics are inconsistent, sometimes showing a stride that projects as NHL average, others below-average. Improving his skating habits, particularly his stride recovery and knee bend are key areas for growth.

Footspeed is unlikely to prevent Boldy from making the NHL, as is usually the case with other high-end prospects. When dealing with the prospects of high-end skill like Boldy, skating is a limiter of upper-end potential, not a disqualifier of NHL ability. Speed creates different looks, which in turns decreases offensive predictability. Like stickhandling or shooting, it’s another tool, and the more tools a player has at their disposal, the better. While I project Boldy as a top-line forward, his skating makes me skeptical enough to withhold a clear-cut high-end forward upside tag.

Don’t let the flaws distract you too much from the attributes that make Boldy such a quality prospect. The high-end skill, the unique backhand ability, and the power game — Boldy’s a dual-threat offensive winger with defensive ability. 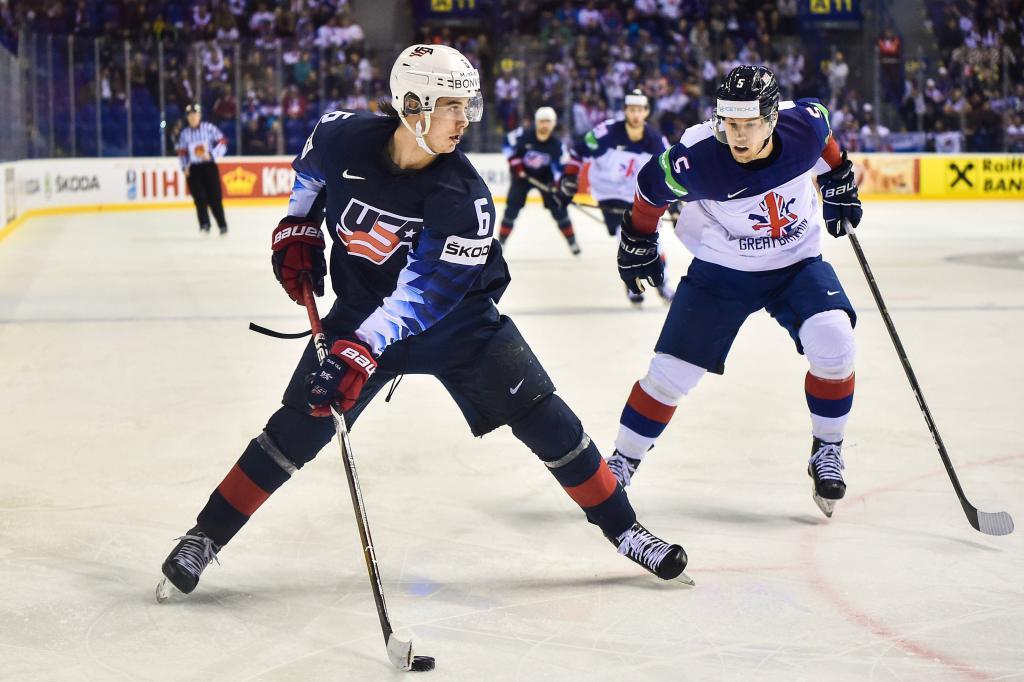 Next article VICKERS: ‘He was a Star Tonight,’ on Jack Hughes’ Player of the Game Performance at the Worlds