Scan AIK defenceman Philip Broberg’s highlight packages and you’re liable to come away convinced he’s not only the best defenceman in this class but perhaps one of the Draft’s foremost players period.

You’ll see everything one could ever hope for in a defensive prospect — size, speed and power. It’s all there. And when Broberg wields those traits to bolt from one end of the ice to the other resulting in a seemingly effortless zone entry or even the odd scoring chance, it’s really something to behold.

Look at the way Broberg generates speed as he buries the shoulder and darts past the defenceman in this clip for a decent scoring chance. That’s the type of play I’d most often associated with an NHL power forward.

To cross-examine those assumptions about Broberg’s strengths with some of his underlying data that I’ve manually tracked and had turned into a Tableau table by fellow EP Rinkside contributor Mitch Brown, one would find that most of it checks out, too. 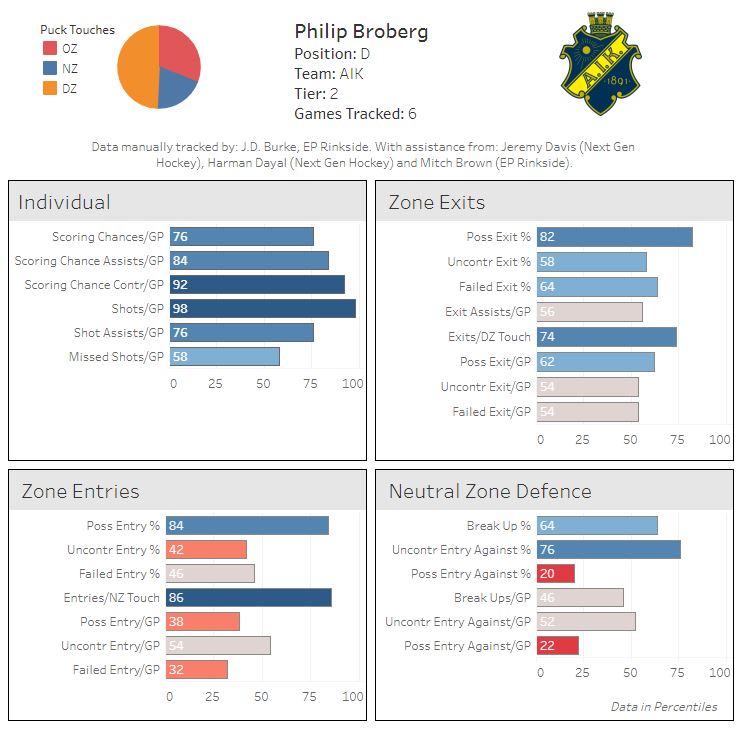 Not only is Broberg producing controlled zone exits and scoring chances at extremely high rates relative to other defencemen in his draft class, but he’s doing so playing in the Allsvenskan, a Swedish men’s league just one tier removed the SHL itself.

If we restrict the sample of data with which we’re observing Broberg’s play in transition to only include first-time draft eligible players from professional European hockey leagues, Broberg’s 72 percent zone exit rate with control of the puck ranks second behind only Lokomotiv Yaroslavl defenceman Daniil Misyul.

Broberg doesn’t just look like an excellent skater; there is ample proof to suggest that he’s putting those wheels to use in precisely the ways one might expect from a player with those abilities.

Where the disconnect does begin to reveal itself, though, is in Broberg’s counting stats (two goals and seven assists in 41 Allsvenskan games), which don’t necessarily reflect his physical gifts with anywhere near as much clarity as his transitional data. How can a defenceman with such power, speed and size produce so little?

The easy play would be to dismiss Broberg’s paltry point totals on account of the strength of the competition he faced playing in the Allsvenskan. There’s something to it. Most of Broberg’s peers are playing more minutes, against weaker competition, so he’s rocking a pretty heavy handicap.

So, what gives? For all of Broberg’s speed and power, he’s not especially willing to wield them in such a way that would create Grade-A scoring chances for himself or his teammates. Most of Broberg’s rushes into the offensive zone are kept to the outside by opposing defenceman, resulting in a low percentage shot or not much of anything at all.

This play is particularly frustrating to watch. There’s a lane to the net eminently available to Broberg if he wants to take it. It might mean initiating contact or taking a hit to see the play through, but the potential for a just reward is immense.

What one so commonly sees with Broberg is a player willing to skate at blazing speeds in a straight line, but to no exact end. He’s the dog that The Joker relayed to Harvey Dent in the hospital scene of The Dark Knight — if he ever caught up to one of those damned cars, he just wouldn’t know what to do with it!

Now, Broberg’s unwillingness to drive the centre lane or take the puck to the net would be less problematic if he had a great shot, but he doesn’t. It’s not a muffin, not by any means, but one will never confuse Broberg for Al McInnis. To produce goals, Broberg has to get into prime scoring positions.

From those high-danger parts of the ice, I’ve found that Broberg’s hands and puck skills can be quite impactful. This play, in particular, stood out as one where Broberg’s puck skills, reach and skating power all came together to create a Grade-A scoring chance for his linemate where no such opportunity would exist in the eyes of most.

Of course, moments like those are so few and so far between. For most defencemen, too, not just Broberg. Some defencemen can find other ways to contribute, though. They don’t need to rely on plays like these.

Broberg’s unwillingness to take the puck to those high-danger areas himself — a trait most defencemen share with him — isn’t something that would register as a long-term concern, in a vacuum. That Broberg lacks the hockey sense to attack openings and work with his linemates when his team activates the cycle in the offensive zone in concert with that, though, is a problem.

Because while Broberg isn’t necessarily a poor defender — his on-ice shot and scoring chance numbers are fantastic in the six-game sample I’ve tracked, for whatever that’s worth — it’s not exactly a selling point, either. It’s quite the mixed bag, really.

Let’s start with the pros. Broberg’s reach and skating ability are great assets at containing attacking forwards with speed. He’s not an easy defenceman to beat to the outside. Naturally, for a player with Broberg’s profile, his puck retrievals are mostly sound, too.

I’ve found that most of Broberg’s problems in the defensive zone can be chalked up to his inability to sense pressure and a general lack of awareness. This play is a tour de force performance in how not to defend. Broberg collects the puck behind the net, skates directly into a forechecker, loses the puck and his stick alike, goes to retrieve his lost stick, and gingerly skates back to retrieve the puck from the back of his net.

Plays of that ilk are surprisingly common, too. Broberg, for whatever reason, has a nasty tendency of skating directly into oncoming forecheckers.

All of this said, my intention when setting out on this article wasn’t necessarily to sewer Broberg’s good name. Quite the opposite. I’d hope that much is clear with the blend of data and videos that show the outstanding parts of his game. It’s to temper what I perceive to be run away hype for Broberg due in no small part to the fact that he performed at his best this year at the U18s.

Players like Broberg don’t come along that often. He’s an interesting fault line for the debate between a player’s ceiling and floor, and how to rate those proportionately to determine an appropriate pre-draft billing.

Because if whichever team drafts Broberg can harness the intense, natural talent that shows in blinding flashes in his game, there is grand slam potential there. You just can’t teach most players to skate like Broberg. The problem is, Broberg’s primary weakness is his hockey sense, and that’s not the sort of thing that is generally correctable either.

All told, Broberg’s production last season, placed in a historical context based on players that he shares a statistical- and stature-based profile with gives him an expected likelihood of an NHL career right around the 35 percent mark. That number is courtesy of the pGPS (Prospect Graduation Probabilities System) system, developed by Next Gen Hockey’s Jeremy Davis. 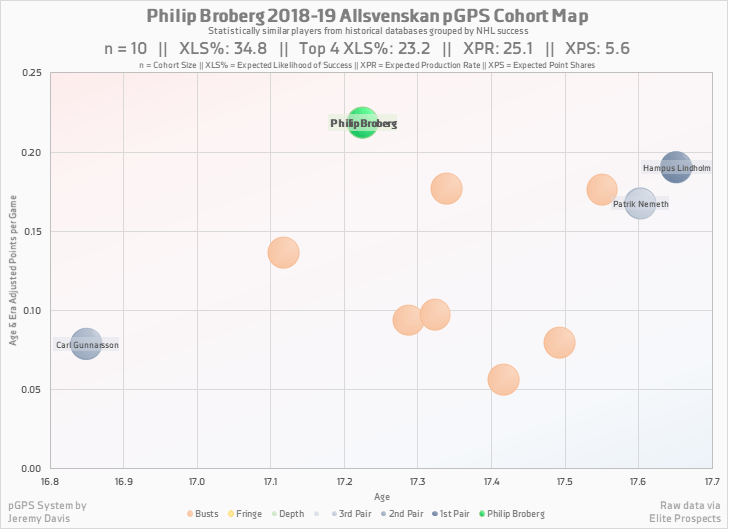 That’s about what one might suspect from a mid-to-late first round pick. Which, conveniently enough, likely aligns closely with where Broberg will find himself on my Final Top 93 Skaters for the NHL Entry Draft, which I’ll release this Friday. 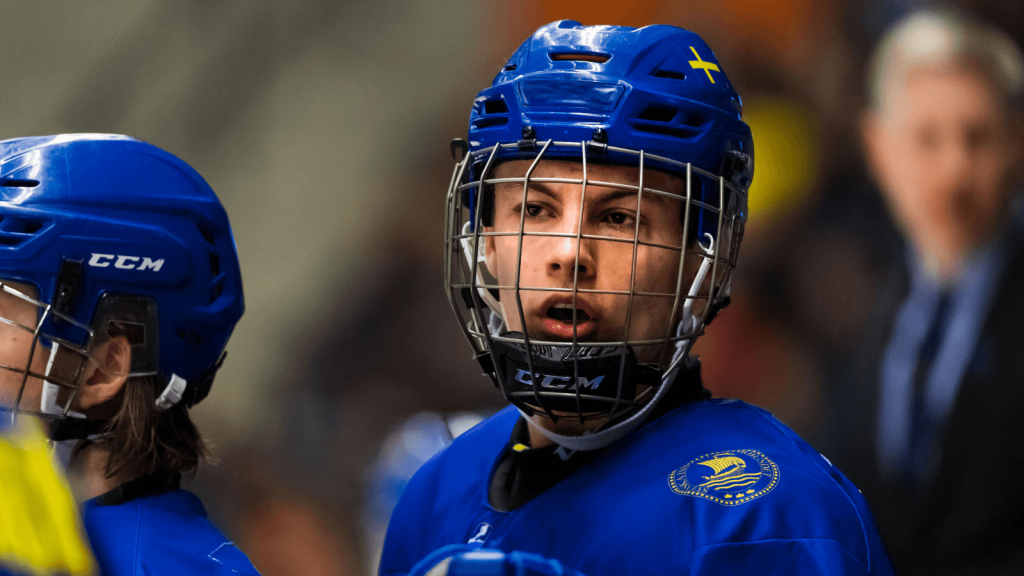 No I In Team For Broberg: “All I care about is winning the gold medal” This article is about:
NHL Entry Draft 2019 AIK Skellefteå AIK Allsvenskan SHL SuperElit Philip Broberg
Scoring Leaders 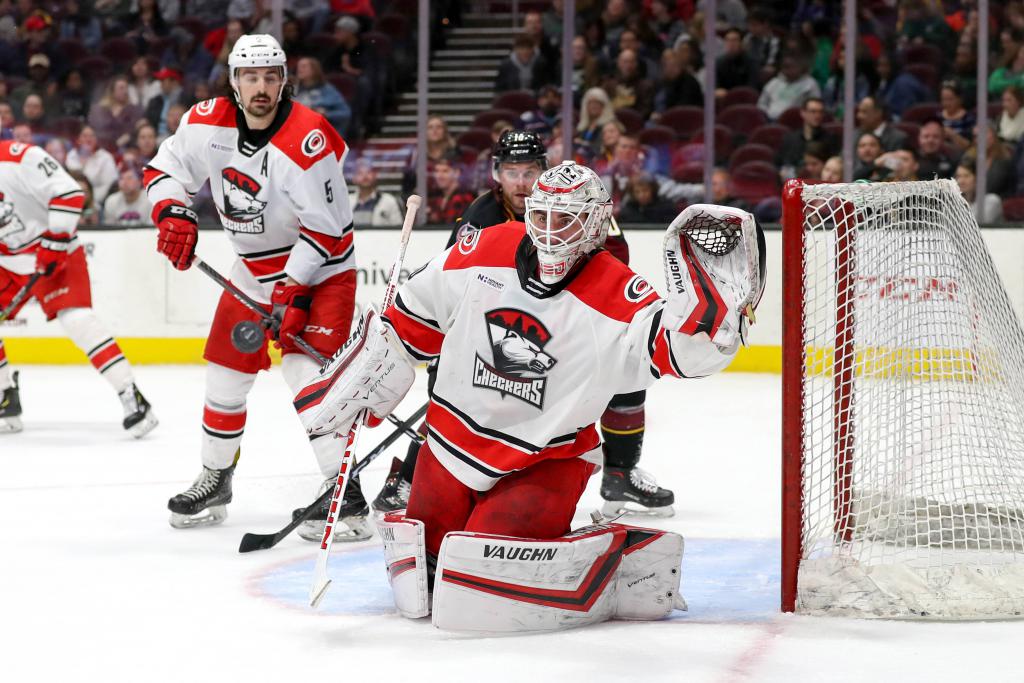