Don’t you worry; I haven’t forgotten about the goaltenders. Even if they didn’t land in my pre-Under-18 World Hockey Championships ranking for the top 93 skaters in this class or the final list I released last week, they were very much on my mind.

If anything, their absence was a testament to the respect that I have for their craft. It’s the most valuable position in hockey, and there’s virtually no overlap in how to evaluate goaltending and skaters.

That’s why I kept the two positions separate from one another. And when it came time to give this Draft’s netminders their time in the sun, I wanted to consult with the sharpest minds in the industry as it relates to understanding the ins and outs, and the nuances of the position.

I’ve consulted with Catherine Silverman of NextGen Hockey and Greg Balloch of In-Goal Media to accomplish that end. The two have at least a decade between them spent playing and analyzing the game’s most difficult position. They’re as qualified as anyone to comment on the goaltenders of tomorrow.

A Note on Methodology

I’m going to rank each of the Draft’s top ten goaltenders. I’ll also include what I determine to be the highest pick I’d use on each goaltender, rather than trying to add each post-hoc to my final top-93 ranking.

Mostly, I’ll get out of Silverman and Balloch’s way in providing analysis on these netminders. There will be a little blurb on their seasons. Maybe a highlight video or a clip of them making an amazing save in one of my viewings. Ultimately, I’ll leave the details to the people best qualified to explain them.

Spencer Knight, who was the starting goaltender for the United States National Team Development Program, might be the best goaltending prospect to enter the Draft in the last decade-plus. Better than Andrei Vailevsky when he entered the draft, even. Nobody else can even hold a candle to Knight.

In total, Knight played in 33 games for the USNTDP last season, posting a .913 save percentage and owing to a 15-1-0 record in non-exhibition USHL competition. As a member of the USNTDP, Knight was their starting goaltender at the U18s and finished the tournament a bronze-medal winner, with the best save percentage and goals above average of any qualifying goaltender.

Here’s what NextGen Hockey’s Catherine Silverman had to say about Knight:

“When Spencer Knight started playing for the U18 US National Team in the 2017-18 season, some scouts expressed concern with his numbers; after 14 games, he had posted a .903 save percentage and had a similarly-mediocre .902 for the USNTDP to boot.

What most failed to consider, of course, was that Knight was just 16-years old at the time, and his ability to keep pace with his older teammates was telling of just how high a Hockey IQ he possessed. Teams have become increasingly cautious about drafting goaltenders in the first round, but the way he’s been playing — putting up poised, well-paced performances with consistent technique and stellar reads at just about every level he’s played — suggests that the team that picks him up has a future starter in the making.

Knight’s a rarity because he’s not boasting an overly flashy, agile game that teams are dazzled by while hoping to rein him in down the line. Instead, he’s playing a game that suggests he reads every pace of play well and knows what to pull from his arsenal at what time. There’s not a lot to dislike about his game right now; so long as he remains self-aware during his development, he could be the league’s next big thing. This is the goaltender that the 2018 draft class was sorely missing.”

There was a time this season when some in the scouting community thought of Medicine Hat Tigers goaltender Mads Søgaard as a potential first-round pick. Their numbers have dwindled. Søgaard struggled to hold the fort for an insufficiently talented Danish team at the World Juniors played a big role in that. But he remains a noteworthy prospect, probably second to only Knight himself in this year’s draft.

Søgaard’s got one thing going for him that even someone with an intermediate knowledge of the position can see from miles away. He stands tall at 6-foot-7, and as a result, covers a lot of the net. In 37 games with the Tigers, Sogaard went 19-8-2 and posted a .921 save percentage.

Here’s what In-Goal Media’s Greg Balloch had to say on Søgaard:

“A spotlight has been placed on Danish goaltending since the rise of Frederik Andersen in Toronto. Nobody has been able to take Andersen’s crown yet, but the next wave could provide a few challengers. Mads Sogaard is one of those goalies. After spending a year in North America playing in the NAHL, the repeal of the Euro goalie ban in the CHL allowed him to make the jump to Medicine Hat of the WHL – where he stole the show.

What jumps out immediately about Sogaard is his massive size. At 6-foot-7 he has scouts and coaches drooling about the possibilities once he develops. With that size comes a unique set of challenges, though. Larger goaltenders tend to have a harder time sealing, whether it be on jam plays at the post or saves that they have to make while transitioning. With Sogaard specifically, he likes to play an aggressive style that attacks shooters, which unfortunately highlights this issue.

He keeps a very wide base as the puck is in movement around the zone. This allows him to flatten out on scramble plays around the crease easily, utilizing his above-average flexibility, but also hinders his lateral movement just a bit. Other large goaltenders like Connor Hellebuyck and Roberto Luongo have switched to a much narrower stance in recent years, which allows better access to your edges, and could make Sogaard even deadlier while moving side to side. Sogaard is a very exciting prospect with high potential, but it is clear that he is quite a few years (and a few adjustments) away from ever suiting up in an NHL game.”

Nobody knew who HK Ryazan netminder Pyotr Kochetkov was in his first season of draft eligibility. That was the word out of the World Junior Hockey Championships this January when the hockey world wondered aloud how a goaltender of Kochetkov’s calibre could slip through the cracks. Considering Kochetkov played in the MHL, a statistically anomalous, strange league if there ever was one — it checks out.

A year later, it’s hard to imagine a scenario where Kochetkov makes it to the fourth round. Kochetkov’s performance at the World Juniors helps. No doubt about it. But he was also dominant in league play for HK Ryazan in the Russian second-tier men’s league, posting a .930 save percentage over an 18-game sample, to go along with the .911 clip he spotted in two games of KHL action for HK Sochi in the KHL.

Here’s what Catherine Silverman had to say about Kochetkov in her profile of the Russian netminder for NextGen Hockey:

“It may have been this quiet nature of [Kochetkov’s] game that left him overlooked for so long, but it’s kept his numbers looking strong as he’s risen in the ranks of the Russian hockey system. That’s reassuring; he’s both controlled and understated when he makes a stop, with a good understanding of how to make depth recoveries and re-gain his positioning without losing his focus on the puck.”

There were big shoes to fill in Everett with the graduation of Carter Hart first to the Lehigh Valley Phantoms for a pit stop before setting up roots in the Philadelphia Flyers’ crease. Luckily for the Silvertips, Wolf wasn’t intimidated, and he rose to occasion as a high-end starting goaltender in the WHL.

Now Wolf is poised to follow in Hart’s footsteps again, hopefully as a second-round pick — it’s more likely that Wolf will go in the third or fourth round, realistically. In 61 games for the Tips, Wolf built up a 41-15-2 record, with a gaudy .936 save percentage in all situations.

For more on Wolf, we’ll turn our attention to this bit of analysis, courtesy of Balloch:

“As the successor to Carter Hart in Everett, Dustin Wolf not only had big shoes to fill for his team, but he also has to face constant style comparisons to his former goalie partner. This is compounded by the fact that he is of similar stature and does indeed play a similar style to Hart. There are some key differences in their games, though.

Where Wolf excels is in his play-reading ability off the rush. While most traditional coaches would want a “smaller” goaltender to play aggressively, it’s not exactly necessary for Wolf because he has such great net awareness. He rarely takes himself out of the frame unnecessarily, which is an extremely important skill to have for a goaltender that cannot simply fill the net with his size if he overshoots his target. This attribute helps his consistency because he has a very solid foundation to fall back on, even when other areas of his game falter – which is very Hart-like.

Unfortunately, Wolf does not possess the elite tracking ability that Silvertips fans were accustomed to with Hart. He tends to lose pucks easily when faced with screens and deflections. As a result, there are a fair number of times in a game when he doesn’t cut pucks off with his hands or is forced to reach and scramble by making reactionary saves. To make it professionally as a 6-foot goaltender, this is a must-have type of skill. Every goaltender has an adjustment period to the speed and overall skill of the shooters when they reach the next level, but it may be even more difficult for Wolf because of this.”

The scouting community remains relatively divided on Peterborough Petes netminder Hunter Jones. Some outlets place him as high as the second round, while others have placed a number on him more commensurate with the fourth or fifth. In time, we’ll know where he stands in the eyes of the league’s amateur talent evaluators.

It’s not hard to see why draft analysts are so divided on Jones. His 28-24-2 record for the Petes, combined with a .902 save percentage (the 12th-highest rate among OHL goaltenders) seems decidedly average.

All that said, Silverman of NextGen Hockey was quite high on Jones, and had this to say on the Petes’ netminder and how he projects at the next level:

“Spencer Knight has dominated talks of the draft from a goaltending perspective, and the quick rise of Mads Søgaard in the eyes of so many has picked up what little attention Knight hasn’t already commanded on his own.

That means that people have been sleeping on talk of Hunter Jones, which means that he’s not getting nearly the accolades that he deserves for being the goaltender who would easily be the top of the pool any year other than this one. He’s not quite as adaptable as Knight already seems to be, but that’s less of a knock against him and more of a praise for Knight; for an 18-year old goaltender, Jones is certainly the kind of goaltender that a team will be incredibly happy to bring on board.

The league has finally started to see a shift away from wanting to draft purely for athletic agility and size, so although Jones’ 6’4” frame is on the bigger side he’s getting the attention he deserves for his play. He’s controlled, smart, and seems to understand that he doesn’t need to play all that aggressively given his height and stature. He may need to work on fine-tuning his technical toolkit, but that’s nothing new for a teen; beyond the generic need to clean up his reads and consistency, there’s nothing about his game that particularly stands out as being a massive red flag.” 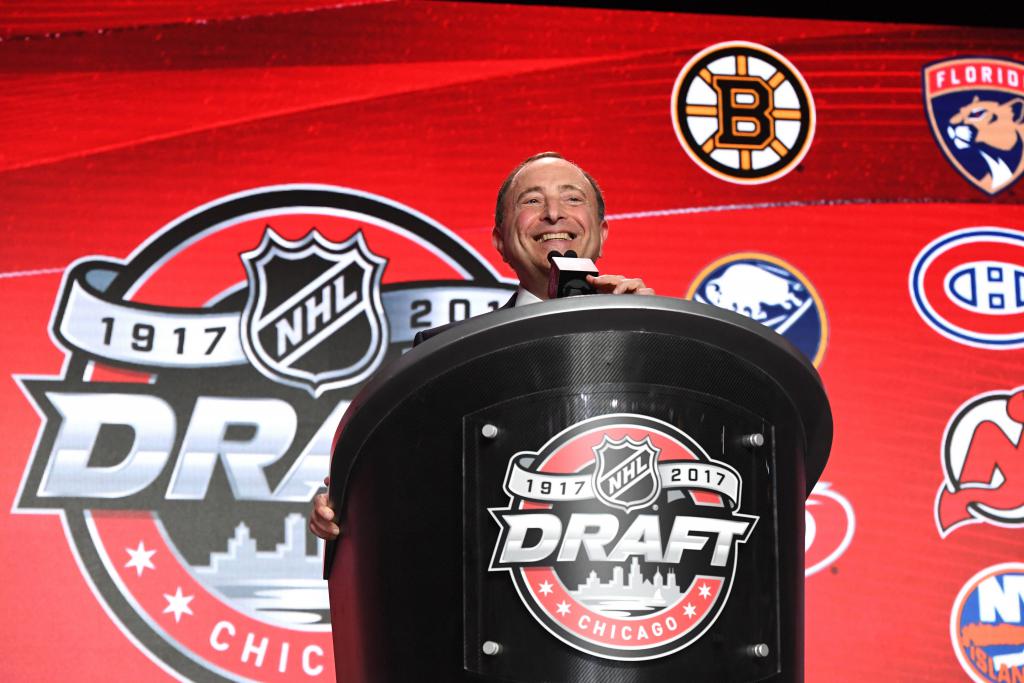