Albin Grewe has been a well-known name in Swedish junior hockey for the last few years, and he was ranked among the top Swedish forwards for the 2019 NHL Entry Draft after a strong 2017-2018-season.

That strong play continued for Grewe and so too did his development as one of the best players in the J20 SuperElit for the 2018-19 season, with 34 points (13 goals and 21 assists) in 25 games. Grewe’s strong play earned him a cup of coffee with Djurgården in the SHL regular season and even one match in the playoffs.

Finally, Grewe played for Sweden’s gold-medal winning team at the Under-18 World Hockey Championships — it wasn’t Grewe’s best work, as he finished the tournament with a meagre two points in seven games.

While Grewe isn’t an extraordinary skater, by any means, he gets around the ice well enough to make it a component of his offensive skill set against juniors. Grewe takes short but powerful strides and intensely works his feet as he accelerates. Even when Grewe is carrying the puck; he’s able to make that push for a little added separation.

That said, if Grewe can improve his top seed — it’s not bad at present, but could be better — then it would greatly benefit his playstyle and offensive outputs. The same goes for Grewe’s agility; it’s not bad, but there’s room for improvement, as he’s not the most evasive skater.

One part of Grewe’s skating that stands out is his balance. He is very hard to knock off the puck, and even as defenders do their best to push him over — Grewe keeps his balance.

The aspects of Grewe’s game that really jump off of the screen are his aggression, high-end competitiveness, and strength. He’s a fierce competitor that brings a lot of energy to his team, bringing a full effort on every shift — Grewe will run himself through a wall (or an opponent, preferably) without thinking twice.

Grewe’s nose is always dirty, and he wouldn’t have it any other way. When the game gets tough, Grewe gets tougher. He doesn’t hesitate to use his body to block a shot or take a hit if it helps his team out. When play is headed in the wrong direction, Grewe is a determined back-checker. He fights hard along the boards in his own zone and puts in a lot of effort when he is looking to win the puck back for his team.

Grewe’s competitiveness is not limited to his own zone; he is a hard worker around the opposing net and along the boards in the offensive zone as well. He can throw big hits to punish his opponents or to open up space for his teammates. Even when he has the puck himself; he can be the one to initiate the contact for a hit. He is not shy in his physical game and almost instantly presented himself with a big hit when he got the chance to play in the SHL.

Grewe’s core strength has been one of the main reasons for his success this season. He is like a bulldozer with the puck and can run smaller defenders over when they try to stop him. Grewe has great upper-body strength. When he lowers his shoulder to protect the puck to get around a defender on the outside he can usually hold them off with ease. And when Grewe widens his legs to use his lower body strength as he challenges the net and becomes incredibly hard to push over. At the junior level, Grewe is close to impossible to beat with sheer force. I’d caution Grewe against getting too comfortable with that; it’s going to be far more difficult when he makes the permanent leap to men’s hockey.

Even though Grewe is a very aggressive player, he’s not your run of the mill goon — there’s a good deal of intelligence to his game, too. Grewe is a good forechecker that reads the game well and can anticipate what his opponents will try to do with the puck. It’s not uncommon for him to win the puck in the offensive zone as he catches his opponents behind the net or in a corner.

By that same token, Grewe could stand to learn when to rein in it in, as he’s suspect to unnecessary penalties as a result of being overaggressive. As long as Grewe doesn’t let his temper get the best of him, he plays a mostly smart game off of the puck, though. He just needs to rein in that… enthusiasm.

His ability to read the game and anticipate plays contributes to the way he can spot chances to throw big open ice hits. While playing off the puck in the offensive zone, Grewe can spot open areas to position himself at around the opposing net or closer to the faceoff circles.

While Grewe is a mix of an agitator and a power forward, he still has intriguing skills in his offensive toolbox. Mainly, he is a surprisingly good playmaker. He sees the ice well in the offensive zone, even while maintaining speed on the rush, and he can make intelligent passes to put his teammates in prime scoring positions.

While the rest of Grewe’s game is very simple and straightforward; his passing game can at times be quite creative and diverse. Grewe can make plays from all over the offensive zone and isn’t as easy to anticipate as a distributor.

It’s that diversity which helps make Grewe an effective player even when the pace slows down, in instances like the power play, for example.

Another part of Grewe’s game that is surprisingly good for a player with his style is his hands. He is far from a puck magician but for a power forward — he has good control and quite a soft touch when he handles the puck, even at near his top speed. He can make quick dekes close to his own body to trick a defender on a 1-on-1. It’s another aspect that defenders have to pay attention to while defending against him.

One aspect that holds him as a passer and a stick-handler are his puck skills. Grewe lacks the touch that would allow him to consistently stay in full control of the puck when he handles it. It prevents Grewe from executing on the plays he often envisions, at present.

There are a few negative tendencies in Grewe’s offensive game, particularly when he carries the puck himself. His decision making can be quite poor. He is the type of player that can fire off a slapshot from far out on a 3-on-1 or try to dangle his way past a defender when there’s no one to cover for him.

Grewe also likes to move the puck himself a lot and can be somewhat of a puck hog. He does not always utilize his teammates, even when he clearly has them in his field of view.

Then there’s Grewe’s tendency to try to play above his own skill level. He will try to stickhandle his way through traffic or make complicated plays that he cannot execute. The line between being confident in your abilities and not recognizing and adapting to your weaknesses is a fine one, and Grewe tends to cross it at times. When he does, not only does he become an inefficient player — his whole line can suffer from it.

Another area where Grewe stands to improve is in his shot. Grewe’s wrist shot — his weapon of choice — is not that bad. It is powerful and has a decent release but lacks accuracy. If Grewe had a better shot he would be able to score a lot more than he has this season, as the rest of his game has allowed him to create a lot of scoring chances for himself.

It’s something he overcomes at present by avoiding positions where a perfect shot is needed to score. Instead, Grewe fights like hell to get in close to the goal, where he’ll outmuscle defenders for loose pucks and get goals for the trouble. He also has the good sense to know which parts of the ice are worth fighting to get to.

A big positive about Grewe is that he can fill so many roles and play very well while doing so. He is a good penalty killer. He can take several different roles on the powerplay. He can play on a top line to make room for the more skilled players, then finish off chances around the net. He can be a very effective bottom-six player that provides some scoring while playing a tough game while throwing hits and getting the opponents best players off their game.

Instead, Grewe should focus on transitioning his game from junior to senior hockey in the SHL. As Djurgården has qualified for the CHL to the 2019-20 season, Grewe might get a chance to shine against senior players as soon as the end of August, when the tournament starts. 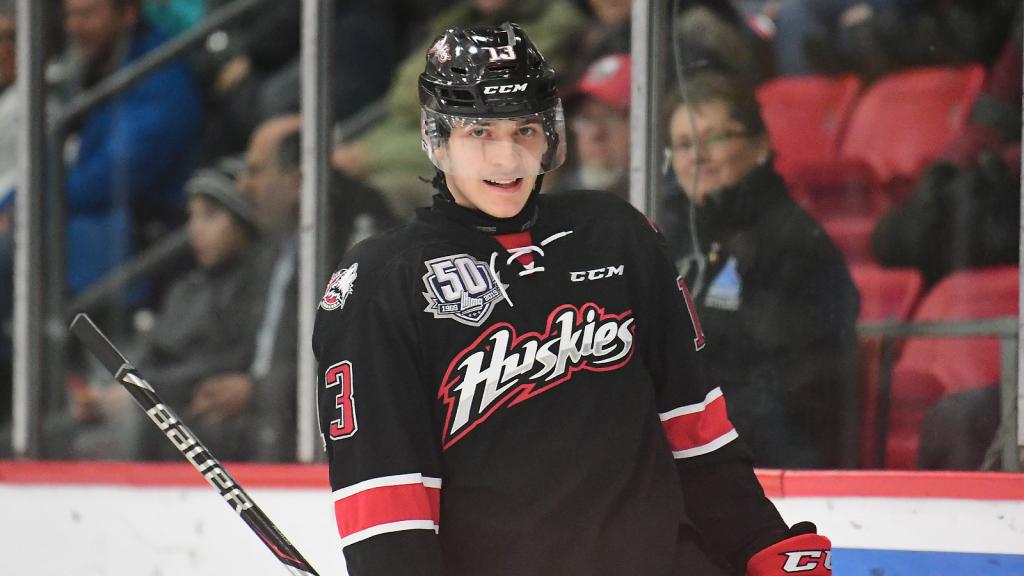 Next article THE PIPELINE SHOW: Talking with the QMJHL, SJHL Commissioners and Family Advisor Colby Drost