Despite NHL scouts being on top of him at every game, despite already passing his 23rd birthday, there was never a question last year that Nico Sturm would return for his junior season at Clarkson.

And that decision is paying off. Sturm’s steady upward trajectory has continued, and the already more-than-capable two-way center has refined his game further, in many small ways. That only makes scouts lick their chops even more.

“It was not a hard decision at all,” Sturm said. “I knew early I would come back. It wasn’t an option. My schoolwork, I want to get that done. And being two years from graduation there was no chance (I would leave). It’s not gonna happen. I made a commitment, and they made a commitment for me. Second, I have big goals here — a championship, we were one goal shy last year. That’s what in the back of my mind when I’m in the weight room.”

And he’s continued to get better and better, making scouts drool.

“He’s playing at a high level with his pace,” Clarkson coach Casey Jones said. “He’s a 200-foot player, he’s always been that. He’s always been a good defensive kid. He’s so competitive, he takes such great pride in it. You’re starting to see next-level, high-level offensive play that really good players make. He’s improved half a step or two every year in terms of his conditioning and training. He’s in a good place in terms of managing his emotions and staying on an even keel.”

Now 6-foot-3, and around 210 lbs., Sturm always had the size. But as a native of Germany without flashy offensive skills, he was overlooked when it came to the NHL.

Which is fine, because Sturm had plenty of work to do before he was a complete package.

Sturm said that, growing up in Germany, he knew he wanted to study abroad, but had no idea how serious the hockey was in the NCAA, and how high of quality. He was steered, instead, to the NAHL first, then to the USHL before landing on Clarkson’s radar.

“I thought (hockey) was something you do on the side (in college),” Sturm said. “I didn’t know it was a path to the NHL and that people play juniors before that so you can quality for college.”

Playing in the German Junior League, it was hard for Sturm to attract attention. He had to send whatever limited footage there was of him playing, to junior teams in the U.S. He wound up in Austin of the NAHL.

“The year I played in Austin was probably the most important year of my career, not just in terms of hockey player, but the coaches there taught me how to be a man,” Sturm said. “It was the first time I was away eight, nine months from home. First time standing on my own feet. It was tough at the start. I was fortunate enough to have them as coaches.”

The big step came when he was selected to play for the German World Junior team. “That was a huge confidence boost.”

Sturm said his time in Corpus Christi, which lasted three months, was where he going into a training routine and gained 20 pounds.

“We work out back home, but there were no specific workout goals. It’s just, you hit the gym,” Sturm said. “Just to give everything a purpose, that’s what I’ve learned. Workout with a purpose, skate with a purpose, come to the rink with a purpose — know exactly what you’re doing, where it’s gonna lead you. And I’m grateful for my experiences in junior hockey in general, not just on the ice.” 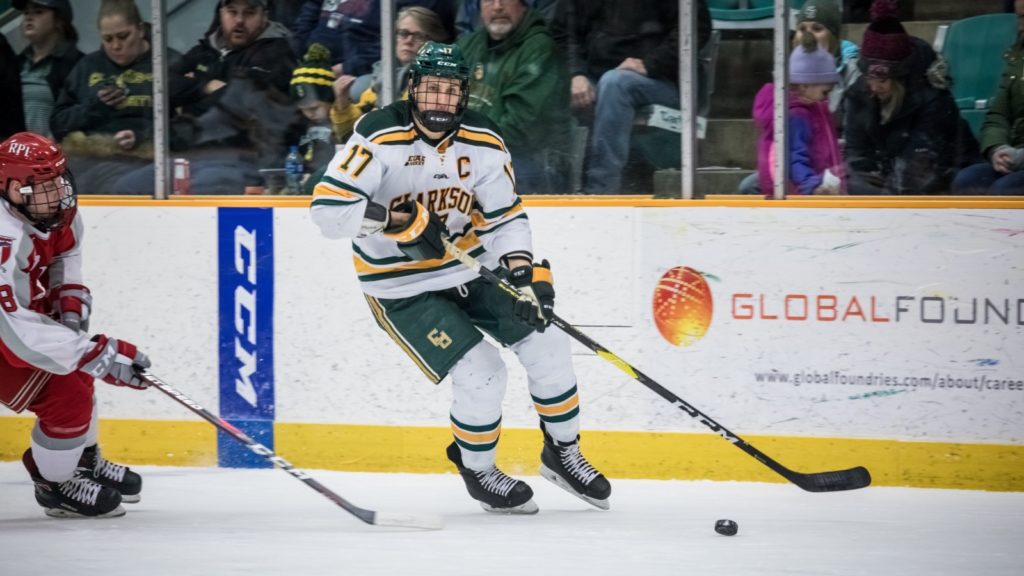 Clarkson’s coaches spotted Sturm while in the NAHL, and after following him for a while, offered to commit him. Though they still wanted him to play a year in the USHL to fully prepare.

“I loved (Clarkson) immediately,” Sturm said. “The fact that it was small, that it reminded me of home. I’d never played for big clubs. It was a good environment for me to grow as a player and mature and do something special. My goal was to play every night, get as much ice time as you can.

“They’ve given me the opportunity to grow here. I say to recruits — Clarkson’s now getting renovations, everything will look nicer — but don’t get fooled by a nice video room. All you need to know is, does the school give you the right tools in whatever you want to do. If you want a job or the NHL. For me, it’s a blue collar work environment that I felt like I could flourish in.”

Once at Clarkson, the progress only continued. Just seeing a progression one year after the next, says a lot about a player. Part of it is the great coaches Sturm has surrounded himself with, and another is his world-class outlook on his game and future.

“Being one of the captains has been one of my goals, and just improving year to year. You want to look back and say you’ve gotten better,” Sturm said. “Point production is what people look at … and that’s a part of it, but there’s more to the game, obviously, than that. And with the kind of player I am, I’m a balanced guy. I’m not a fancy guy, but I know Casey relies on me in a lot of different situations, and being out there at the end of the game, and taking responsbility as a leader.”

Sturm came in with a highly-touted freshman class, one that included Sheldon Rempal, who is already in the NHL. The goal was to get a once-storied program back into regular contention. Sturm scored 21 points that year, then last season, he went up to 14 goals and 37 points as Clarkson made the NCAA tournament for the first time in 10 years, and first under Jones.

This year, there’s unfinished business, and even though Rempal left, there was plenty still there for the Golden Knights, and they are back in position for an ECAC title and NCAA berth. Sturm has 11 goals and 26 points already in just 22 games, and a plus-16 rating, all of which are team highs.

And the improvement remains steady. This season, Clarkson brought in a new assistant coach, Brent Brekke, who has been to Frozen Fours with Cornell and Miami, and has helped Sturm tweak his game to new heights.

“I feel like even this year bringing him in, for me personally, he’s made a lot of impact on my game. We’ve worked on a lot of video together,” Sturm said. “How we break out of our own zone, or the regroups, do I shoulder check correctly, do I scan the environment. You always want to be a step ahead of the game. That’s the next step. That’s what he’s trying to teach me. Are you aware of the play that could come up, not when it comes up but before that. At the next level everything’s gonna be a little bit faster, less time, less space available. So that’s stuff I work on.

“Teams like Quinnipiac and Cornell, they take space away. To find those little areas in the offensize zone, that’s just becoming increasingly important. In the zone, where do you position your stick. Even when the puck is away from you, where you position your stick on the ice makes it just look like there’s less area for a seam pass for the opposing team. So it’s subtle stuff like that. When they work with freshmen and sophomores they work on more fundamental stuff. For me, in my third year, I know what they expect of me, but I’m still looking to improve.”

Jones knows he can rely upon Sturm in all situations, and even within this year, his offense has only gotten better and better as the rest of his game remains steadily excellent.

“For me, his growth has been really fun to watch,” Jones said. “In most games, he’s right there as one of the best players on the ice, if not the best. Consistency is what you like to see from that sophomore to junior year. A lot of times it’s the biggest pop you see from a player and you’ve certainly seen that from him.

“Someone is so good defensively, you’re put in those positions all the time. He’s such a good penalty killer, he bites pucks and all that. But getting the chance he’s flourishing playing in an offensive role as well. He gets a lot of offense from being in good defensive position. But he’s great on faceoffs. And he’s just making little area plays that you don’t always see in big men.”

Sturm may not have had the excitement of hearing his name called at the NHL Draft, but with a dozen scouts following him around, he’s sure to get his pro shot sooner than later at this point.

“There’s plenty of room to grow from sophomore to junior year. Scouts are OK with that. Stay in college as long as you can,” Sturm said. “I don’t talk to anyone. I’m letting my advisor handle it. And Casey talks to the scouts. I have a responsibility here as captain first and foremost. I don’t want guys thinking I’m concerned with next year. When the season’s over, there will be a time.”

You may also be interested in: TOP 10 – NCAA: Cale Makar tearing it up for UMass This article is about:
Features News NHL Prospects Clarkson Univ. NCAA Nico Sturm
Scoring Leaders 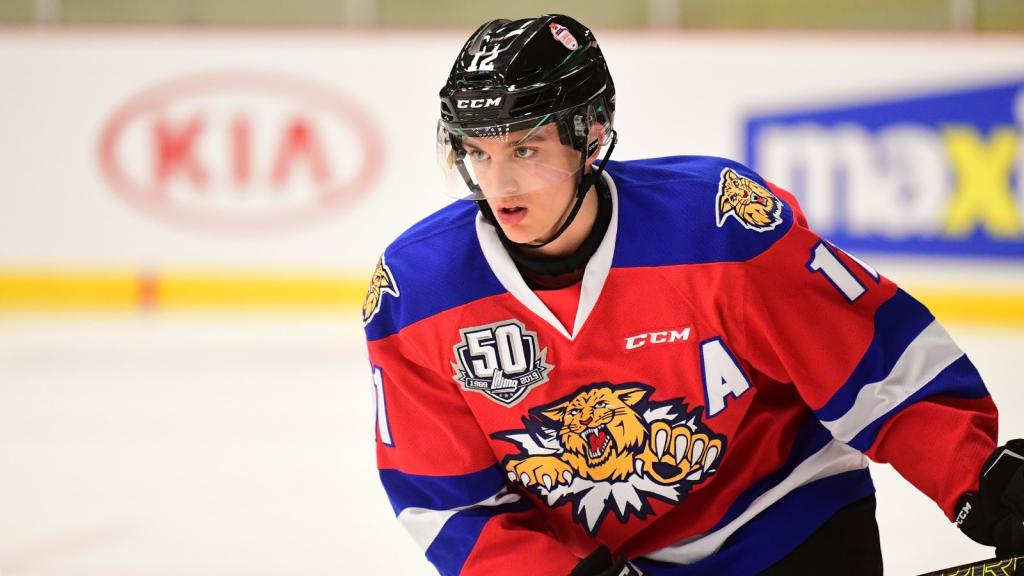 Next article VICKERS: Pelletier out to prove size doesn’t matter