The Toronto Marlies’ grip on the Calder Cup remains tight.

In Game 4 of the Eastern Conference Final at home against the regular-season champion Charlotte Checkers, the Marlies twice broke the visiting team’s lead to pull off a 4-3 overtime victory. That decision tied the series, 2-2, going into Game 5 in Toronto on Friday night. Toronto’s win also guaranteed that Game 6 will be played Sunday at Charlotte, where the teams split the first two games of the series. The Checkers had blown out Toronto, 5-1, in Game 3. If necessary, Game 7 would be in Charlotte next Tuesday night.

In Game 4, the Checkers held 2-1 and 3-2 third-period leads that the Marlies cracked. Toronto forward Michael Carcone then finished the win and his hat trick on a goal 7:29 into overtime. He also assisted on Jeremy Bracco’s third-period tying goal that put the game into overtime. The Marlies are now 3-0 in overtime, taking one extra-time win against each of their three playoff opponents – the Rochester Americans, Cleveland Monsters, and Charlotte.

Carcone, who turned 23 earlier this week, went 20-24-44 in 62 regular-season games between the Marlies and Utica Comets. Undrafted, he had played parts of three seasons in the Vancouver Canucks organization for the Comets. That ended with a trade to the Toronto Maple Leafs for forward Josh Leivo this past December. He has 6-4-10 in 11 playoff game for the Marlies and has been on a line with set-up man Bracco and veteran scorer Chris Mueller in head coach Sheldon Keefe’s line-up.

While the Checkers and Marlies battle in the East, the Chicago Wolves and San Diego Gulls continue their Western Conference Final.

The Gulls pulled out a 3-2 home victory in Game 3, earning themselves a 2-1 series lead. Game 4 is set for Friday night in San Diego before the Gulls also host Game 5 on Saturday. If necessary, the series would move back to Wolves ice for Game 6 and, possibly Game 7 next week.

If the Wolves can pull off at least one win in San Diego in the next two games, the teams could be looking at another long playoff series. They each played a six-game second round. San Diego finished the best-of-five first round in four games, but the Wolves had to go the distance to open the postseason.

It remains to be seen whether San Diego defenseman Andy Welinski will dress for Game 4. He received a match penalty in the second period of Game 3 for a corner hit on Wolves rookie forward Cody Glass. For the Wolves, Glass later returned to the game. As of late Thursday, the AHL had not announced any further action, if any, regarding Welinski, however.

Playing on a line with energetic Chase De Leo and Kevin Roy, Gulls rookie forward Sam Steel continues to excel in his first taste of pro playoff action. Taken 30th overall by the parent Anaheim Ducks, he brought considerable high-pressure experience with him into the Calder Cup Playoffs. He captained the WHL’s Regina Pats last season and had a 2-11-13 five-game performance at the Memorial Cup that earned him tournament MVP honours. That followed a 33-50-83 regular season in Regina as well as a gold medal for Canada at the IIHF World Junior Championship.

The 21-year-old Steel (6-7-13 in 13 games) is tied with Charlotte forward Morgan Geekie for the AHL rookie scoring lead in the postseason. Playing shorthanded in the second period of Game 3, he intercepted a Wolves clearing attempt before racing in on netminder Oskar Dansk and tucking the go-ahead goal into the net.

Short-handed! @ssteel23 knocks the clearing attempt of out mid-air, comes in and tucks it in for the 2-1 lead! #FlightToTheCup | #LetsGoGulls pic.twitter.com/rDA8Q2TwMU

Two other top Anaheim prospects are missing an opportunity to participate in this playoff run in San Diego, however. Rookie forward Max Jones, the 24th pick in the 2016 NHL Draft, has been out since Game 3 of the Gulls’ second-round series against the Bakersfield Condors. He has four assists in seven games. Fellow rookie forward Troy Terry has missed the entire postseason after he broke his leg on recall with Anaheim in March, though the Ducks did make him playoff-eligible for San Diego.

A number of familiar NHL-AHL names are off to the KHL next season, and the Rockford IceHogs have been hit by two losses.

Forward Jordan Schroeder, a first-round pick by the Vancouver Canucks a decade ago, is headed to Torpedo Nizhny Novgorod. Schroeder is 28-years-old now and coming off a 19-26-45 season with Rockford. But he did not play an NHL game for the first time since the 2011-12 season. In 2017-18, he got into 21 games with the Columbus Blue Jackets (1-1-2) before an offseason trade to the Chicago Blackhawks organization. With three NHL teams, he went 18-24-42 in 165 regular-season games.

Schroeder’s Rockford teammate, forward Peter Holland, has signed with Avtomobilist Yekaterinburg on a two-year deal. Also a first-round pick with Schroeder in that 2009 NHL Draft class, he finished this season with Rockford after a February trade from the New York Rangers organization. He had been with the Hartford Wolf Pack (20-29-49 in 52 games). He contributed 7-9-16 in 21 games with Rockford as the team’s Central Division playoff bid fell short. Like Schroeder, he did not see NHL time this season after a 23-game stint with the Rangers last season. He registered 266 NHL regular-season games, going 36-49-85 for four clubs.

Grand Rapids Griffins defenseman Jake Chelios will play in China next season for Kunlun Red Star. Undrafted out of Michigan State, the son of Hockey Hall of Famer Chris Chelios, finally made his NHL debut in his fifth full pro season and played five games for the parent Detroit Red Wings at the end of the regular season. He also had 1-14-15 in 61 regular-season games for the Griffins, who exited in the first round of the Calder Cup Playoffs.

Bakersfield defenseman Logan Day has earned his first NHL contract after emerging as a real find for the Edmonton Oilers organization. Edmonton inked Day, 24, to a one-year entry-level contract. He played his season on an AHL contract with the Condors after playing Division III hockey at Endicott College. Day rewarded the Edmonton organization with a 7-27-34 rookie season in Bakersfield, playing 64 regular-season games and offering line-up versatility for head coach Jay Woodcroft. He added a goal across nine playoff games. The regular-season Pacific Division champion fell to San Diego in the second round.

Rockford goaltender Kevin Lankinen has taken well to the international stage at the IIHF World Championship in Slovakia. Lankinen, 24, struggled against Sweden on Thursday in a quarterfinal, but it was still enough to help Finland pull off a 5-4 upset win in overtime. Through six games for Finland, Lankinen has a 1.83 goals-against average to go with a .916 save percentage. Finland will face Russia in the semi-final on Saturday in Bratislava. Lankinen played 19 AHL games in his first North American season, going 7-8-4 | 2.50 | .910 while also spending time in the ECHL.

Lankinen is not the lone AHL netminder at the event, either. The Binghamton Devils are represented by Mackenzie Blackwood (Canada) and Cory Schneider (USA). Pavel Francouz of the Colorado Eagles has played twice for the Czech team. Carter Hart, who started the season with the Lehigh Valley Phantoms before advancing to the Philadelphia Flyers, has partnered with Blackwood for Canada. Thatcher Demko played the first half of the regular season with Utica Comets before also moving on to the NHL and is with Team USA. Alexandar Georgiyev of Russia has played a pair of games after dividing his season between the Rangers and Hartford.

Forward Rudolfs Balcers, 17-14-31 in 43 regular-season games for the Belleville Senators while also appearing in 36 games for the Ottawa Senators, led Latvia in scoring. He finished 1-8-9 in seven games in his second time at the tournament. 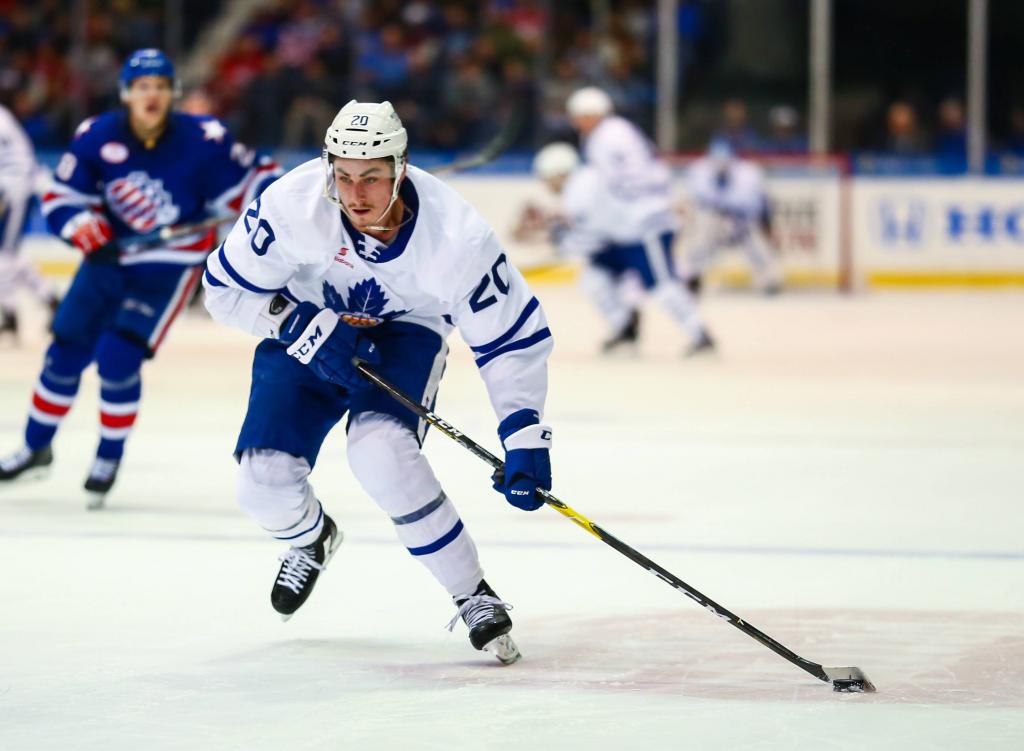 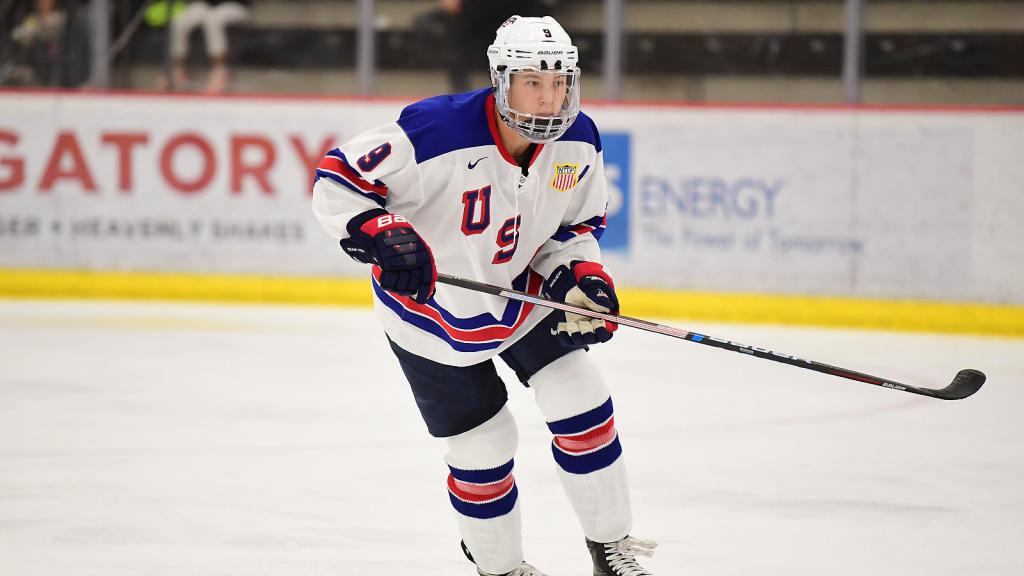 Next article BROWN: Breaking Down Matthew Boldy and his Unique Backhand Talent