5 bold predictions for the 2022 U18 World Hockey Championships

The IIHF 2022 U18 World Hockey Championships are firing up in Germany this weekend and will showcase some of the world's best draft-eligible and younger players.

This rendition will consist of eight countries. The defending champion Canadian squad is grouped up with the host Germans, the Americans, and the Czechia squad in Group A. Group B features the Swedes, Finns, Swiss and Latvians.

We're missing the Russians and Belarusians for obvious reasons, but also the Slovaks who were demoted but will return next year.

The potential for wild swings in momentum, upsets, big moments captured, and hearts quickly broken is only magnified when it’s a group of 16- and 17-year-olds competing on such a big stage. The pressure will get to some. Others will grasp the moment and make a lasting impression.

While this is far from a scientifically-driven method, I’m going to take a few swings here today and showcase some players and teams that could defy the odds and end up being major storylines over the next week or so.

A reminder: These are bold predictions. They’re not meant to look all that reasonable today and may look even less so when the tournament comes to a close on May 1st. They may even contradict each other! But they have the potential to happen, and on a rainy April day, there are worse things in life than potential.

Youth will be served

Unlike the U20 World Junior event, the U18s will often have a wider spotlight that can shine brightly on some underage players. The 2022 U18s especially.

In fact, this prediction will go as far as saying that the top skaters from nearly every team will be either 2023 or 2024 eligible, with one exception: The Americans

The potential of some of these 16-year-olds is through the roof.

We'll get into specifics further down the board, but despite not having the presumptive first overall pick for 2022 at the event, we'll be watching two of the top three from 2023, and likely a couple more who will push for the top five. There will be a kid with his eyes set on the pole position in 2024. And then a handful more with cases to litter the top 10 in both of those classes.

At the end of the day, this will be an eye-opening event for teams and fans to see the next wave of NHL stars. Connor Bedard is an easy one to find, but watch out for Adam Fantilli (Canada), Aron Kiviharju (Finland), Tanner Howe (Canada), Otto Stenberg (Sweden), Leo Carlsson (Sweden), and Matthew Wood (Canada).

The Americans run away with gold

Now, I mentioned the Americans lacking an underage star ready to lead their team, and I meant it. But only because this is the USNTDP squad that has played together all season and we know who they play a ton. That said, don't sleep on Hunter Brzustewicz. He's the top defender in the 2023 class and has the goods to make a lot of noise.

Now, back to the bold prediction.

I recently sat down with USNTDP star centre Frank Nazar, and he discussed the perceived advantage that the Americans will have at the U18s with their built-in chemistry.

"I think the chemistry part is an advantage, but also it might be an advantage to other teams coming in. Each guy is going to want to be there to prove to the coach that they're the guy to play when they're down a goal and need to get out there and score. So it might give the other teams that aren't super familiar with each other more motivation to go out there and play their best every shift."

Frank Nazar is one of the most skilled players in the 2022 draft.

I sat down with the USNTDP centre to talk about the upcoming U18s, who he models his game after, draft rankings, college and more @EPRinkside https://t.co/m1L0WYK4ih pic.twitter.com/qY6QV95IYE

Personally, I think Nazar undersold the benefit of familiarity with his mates. The built-in chemistry and camaraderie with this team, coupled with just how damn good they are will drive them to the gold medal in decisive fashion. The Americans haven't won the whole thing since 2017, but before that, they had won nine times over a 13-year span.

This version of the squad will bring glory back to the homeland and will be led by Logan Cooley and Nazar. However, the surprise kid who will see his stock elevate the highest will be the diminutive defender, Lane Hutson.

Finland is yet to produce a first overall selection in the NHL Entry Draft. They’ve come close a few times. Patrik Laine, Kaapo Kakko, Kari Lehtonen, and Aleksander Barkov all went second overall. They’ve had a few third overalls. The top spot has thus far eluded them, though.

All that could change in 2024 when it’s Aron Kiviharju’s turn at the draft. The 16-year-old Finnish defender has been producing at the U20 level at a rate we seldom see from elite forwards his own age. In fact, only Laine produced more points than Kiviharju as a U16 in the U20 circuit. Ever.

16-year-old Aron Kiviharju made history by being named to Finland's U18 World Junior team. @MitchLBrown and @lassialanen have more on what makes him so special, plus an early look at the 2024 NHL Draft.#WorldJuniors

Now, Kiviharju is going to take that speed and skill and plunk it right down on every team that comes Finland’s way at the U18s.

The youngest player at the tournament will wow to the level that he is named one of the top players on his team and among the tournament's all-star team. It’s a feat we haven’t seen from a draft-minus two defender since Victor Hedman accomplished it back in 2007. Kiviharju is just way too good to be this young.

Connor Bedard breaks all of the records

Last year, a 15-year-old Bedard got the call for the Canadian U18 team, and he made hay while the sun was shining. The Regina Pats superstar ended up sharing second in tournament scoring with Shane Wright by recording seven goals and 14 points in just seven contests.

That mark matched Connor McDavid's U16 outing at the same event. And we simply must mention that Bedard is seven months younger than McDavid, only adding to its impressiveness.

This year, there were plenty of questions swirling around whether Bedard would return to this event after he stepped up to the U20 tournament for a minute and dominated that level too. But the newly-minted Canadian captain is here and he is gunning for all of the records.

There are two records in particular that Bedard will be breaking this spring. The single-tournament goal record is 14 and co-held by Cole Caufield and fellow 2023-eligible Matvei Michkov. Then there's the overall point record owned by Nikita Kucherov when he amassed an incredible 21 points in just seven games back in 2011.

Bedard will set new marks leaving the wildest part being that he is once again eligible to return to the event next season. But I highly doubt we're given that much joy.

The Swedes show out

Lost in the shuffle of all the Canadian and USA hype is a very real medal threat in the Swedish squad. They boast several projected first-round selections in 2022 in Jonathan Lekkerimäki, Noah Östlund, Liam Öhgren, and defenceman, Calle Odelius.

However, it'll be the 2023 kids that really make their mark and help launch the Tre Kroner into the Gold Medal Game. This prediction has the 2019 champs come to play every game and for the aforementioned draft-eligibles to drive play and lead the team in minutes in the round-robin. But it will be 2023-eligibles, Otto Stenberg and Leo Carlsson who will provide the spark and timely punch that makes the team competitive against the heavy hitters when the medal round kicks off.

Carlsson is far too mature for his young age and that maturity led to him playing the majority of his draft-minus-one season with Örebro HK of the SHL. When he did slide down to the J20 level, he was demoralizingly good, to the tune of 27 points in just 14 games. The 6-foot-3 pivot is going to be a load to handle.

Meanwhile, the 16-year-old Stenberg has historically torched the U17 competition internationally and this year trailed only Dalibor Dvorsky in U17 scoring in the J20. His 0.97 points-per-game is among the top-25 producers over the last 20 years at that level for a draft-minus one

Both will shine brightly as the tournament wears on and end up leading the way to a medal finish.

Canada scores all of the goals but comes up short

I saved the best one for last here. As the days and weeks ticked off and the U18 tournament was inching closer, it appeared as though Team Canada would be bringing a weaker than the normal crew of talent. The QJMHL isn’t releasing players. The majority of top 2022-eligible kids were poised to be in their league’s playoffs. There was some hope that Bedard would maybe be interested in tuning up the competition for a second-straight year, but it was more hope than likelihood.

Well, the landscape changed dramatically over the last week. The Chicago Steel graciously loaned out their top player and soon-to-be third-overall pick in the 2023 draft, Adam Fantilli. This despite the club being in the playoffs. They also decided to lend Nicholas Moldenhauer to the team, which is terrific for him to continue to build his draft stock.

It looked like Canada was going to be lite on talent for the U18s. Now they boast several [very] early future first-rounders:

Then, the team was able to convince Bedard to come once again. And with him, teammate Tanner Howe, a 2024-eligible skater who just went out and scored 64 points in 66 WHL games.

As mentioned, BCHL superstar and 2023-eligible top pick, Wood is on board. Together with Fantilli and Bedard that trio will represent 30 percent of the top-10 picks next June.

Now, for the part that wets the blanket. The team has exactly one defenceman of real value in Owen Pickering. Their goaltending situation isn’t exactly ideal either. The results will be… staggering. This team simply must go out and run and gun with the opposition and hope to win each game 6-5. And that, my friends, makes for some terrifically entertaining hockey to consume.

Unfortunately, the results will be entertaining but not enough to land them the pole position. And for the country that views itself as the mecca of the sport, coming away with just three golds at this event over 19 years is not ideal.

USNTDP centre Logan Cooley is so good at the event that he makes the lottery-bound teams change their boards to make it a two-man race at the top. And in the end, Cooley end up being selected first overall this July in Montréal. 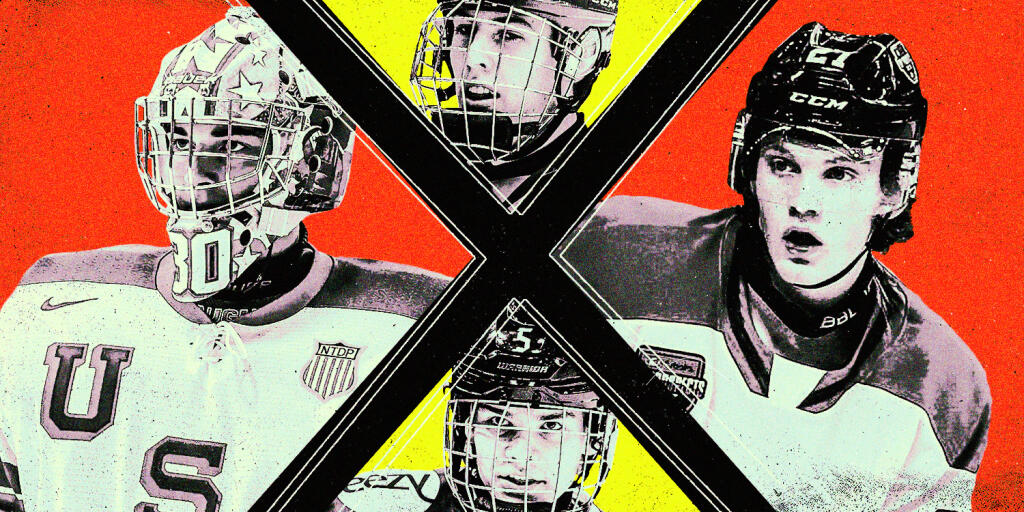