On May 14, the EP Rinkside team sat down together in the virtual world and laughed, shouted, argued and somehow came to an agreement on the top 96 players for the 2022 NHL Draft. As always, it was four hours that flew by and was highly enjoyable.

It had been a little over two months after our last board was released. And over that period of time we had the culmination of league play, the majority of European league playoffs wrapped up, and about half of the CHL postseason was in the books. The IIHF U18 World Championship tournament was underway in Germany.

Unsurprisingly, there were many changes in our assessments.

What transpires below is a look at some of the biggest movers and shakers - both good and bad, and a glimpse into what those players have done to deserve such actions taken upon them.

With the draft set for July 7-8 in Montreal, the group will convene once more to release our final board. You can bet there will be more movement between now and then as well.

Because we’re an independent scouting service, we don’t need to concern ourselves with geopolitical implications of an illegal war or attaining Visas for Russians or Belorussians. And while we as a group feel confident that there will be implications for Russian players on draft day because of those things, this is not why Danila Yurov slipped in the rankings.

Part of the issue with the 18-year-old is that it was extremely difficult to assess him against adequate competition. When in the KHL, Yurov became best friends with the bench. He averaged 4:36 on the ice during 21 regular season games, and just 2:19 per night over 19 playoff tilts. Unsurprisingly, he recorded no goals or points in those 40 games. Hell, he only managed 17 shots on goals over that period.

Meanwhile, in the MHL, he skated all of the fun minutes on a powerhouse Magnitogorsk club. He wasn’t tasked with much else than using his hands and mind to create offence. And offence he created. In 21 games, Yurov recorded 13 goals and 36 points. But, to be quite frank, the level of competition was below him for much of the time and made it difficult to ascertain what his transition would look like.

For instance, check out the defensive coverage on this play...

This Danila Yurov piece is going to be fun @EPRinkside pic.twitter.com/i5UDg0ZXbA

Additionally, our Russian regional scout, Dylan Griffing has been consistently lower on Yurov than our crossover scouts for the entire season. As we get closer to the final board, we simply must trust our regional people who have accrued the most views on their niche players. As a result, Yurov slipped from No. 13 to No. 23.

No, Jagger Firkus didn’t jump up 19 spots simply because he owns one of the dopest names in the hockey world (although it sure didn’t hurt). The Moose Jaw forward sat 41st on our March 2022 ranking. There were some inconsistencies in his stride and ability to get to the inside of the ice that kept him as a second-round consideration.

By the end of May, the recently-turned 18-year-old had come a long way in dispelling some of those concerns. The skating posture remains hit or miss, likely the result of his being very undeveloped physically. Despite those concerns, the 5-foot-10, 154-pound forward is still able to turn defenders and make players miss with his anticipation, patience, clean edge-work and extremely quick hands.

Jagger Firkus is one of the most skilled players in the draft. He’s also one of the slightest

Once in the offensive end, it’s the release that truly separates Firkus from most slight, skilled players. The Western Leaguer is capable of producing tremendous power and precision on a myriad of shot types. He used that ability to tally 42 goals over 76 regular season and playoff games.

His ability to blend high-end awareness, puck skills, and an elite release has catapulted him into the first round with an eye toward the top-20 when we finalize our list next month.

Sam Rinzel, the rangy defender, played his way up the list with his demonstrably impressive USHS outings. The 6-4, right-shot back can basically do whatever he wants at the high-school level. And, early in his USHL showings, he was indicating that most of his traits would transfer up.

Sam Rinzel is the top-rated USHS skater by NHL Central Scouting, and sure to be a factor on @EliteProspects next 2022 NHL Draft board.@DanielGScouting takes you into the Film Room™️ to look at what makes Rinzel such a highly rated prospect.

Unfortunately, as the USHL and U18 contests wore on, his impact has consistently left our scouts wanting more. To borrow a phrase from former USNTDP coach and now Michigan State bench boss, Adam Nightingale, Rinzel suffers from "immature offence." Now, this isn’t to say that the 18-year-old can’t find a way to become less predictable and less chaotic as he matures. With his size and skating, it’s intriguing to bet on. But for now, he falls from No. 21 to No. 32 on our board.

Coming into the season, Bryce McConnell-Barker was pegged as a potential first-round selection. But, it appears that his lost draft minus one season due to the pandemic played a significant role in his output this season.

The 6-1 Soo Greyhounds pivot has a good mind for the game and his physical tools wash out to about NHL average with their projection. However, his skating is a clear deficiency. As a group, we were more forgiving of his struggles early on as he navigated his rookie OHL campaign. However, by this time of year, the evolution has not warranted the draft spot. As such, the former fourth overall pick in the OHL Priority draft has fallen from No. 44 on our March list down to No. 62 on our most recent iteration.

Marco Kasper played 46 games in the SHL this season, far and away the most by any U18 player this season. The end result was seven goals and 11 points, which was tops for U18s but not exactly jump-off-of-the-page noteworthy. However, it’s Kasper’s robust, wrecking-ball-style to go along with good offensive tools that have really endeared himself to our scouts.

The Swedish centre projects to be above average in nearly every aspect that we judge a player on skating, passing, shooting, puck skills, intelligence and physicality. He has added more deception to his offensive game, more nuance rush patterns, and creative in-zone handles. Couple these with his penchant for violence and you’ve got a very intriguing player down the middle for teams to consider.

Kasper sat at No. 27 in March and climbed all the way to No. 17 on our most recent board. Don’t be surprised to see him land even higher than that when it’s all said and done and there’s a chance we hear his name called among the top-10 players this July. His physical, statistical and positional profile usually ends up being snapped up early.

I’m not going to lie, I played a sizable role in Adam Sýkora’s rise up our draft board. The Slovakian forward is one of the youngest players in the crop - just over a week away from being eligible for the 2023 class. His draft-eligible season has been an impressive one.

He skated third-line minutes for Nitra in the top Slovak league. There, he produced one of the better U18 campaigns from that league. His 10 goals and 17 points in 42 games trailed only teammate, Šimon Nemec for teen scorers this season. And he chipped in another two goals and five points in 19 playoff games as his squad came just short of a championship finish.

The 17-year-old also suited up for the national team at the Division I U18 tournament, the World Junior Championships and most recently at the men’s World Championships. He’s been around the block this season.

Adam Sykora isn't just the youngest player at the Worlds this year, he's also the most enthusiastic.

A terrific mid-air deflection for his second of the event pic.twitter.com/vN5guJZJjS

After failing to land among our top 66 players in the March edition of our rankings, Sýkora has jumped all the way to No. 47 for this iteration. He’s a pace-driven forward who owns good instincts, takes strong routes, and can mesh well with skilled players. The questions around his top-end skill package are valid, but I believe can be acquiesced to when considering his age and circumstance.

The Kamloops Blazers recently saw their season end in a tightly battled seven-game Western Conference series against the Seattle Thunderbirds. Playing a key role in that playoff run was left-shot defenseman, Mats Lindgren.

Just like Sýkora, the 17-year-old is very nearly a 2023-eligible prospect and that youth should come into play when assessing him. This is a player that we as a group ranked No. 29 on our first board. Then No. 47 on the March list. This time around, he slipped all the way to 82nd.

The supportive voices for this player have been staunchly outgunned in recent discussions. Some see a player who produced very strong metrics for his age and situation. A player who can show a high degree of skill at times. A project defender with plenty of upside. The naysayers point to wildly inconsistent decision-making, a less-than-ideal stride, and a set of tools that appear nearly maxed out at present time.

Lindgren will be a very interesting player to watch on draft day. Some public lists still like him in the first round, others are in the mid-rounds and several see him as somewhere in between. 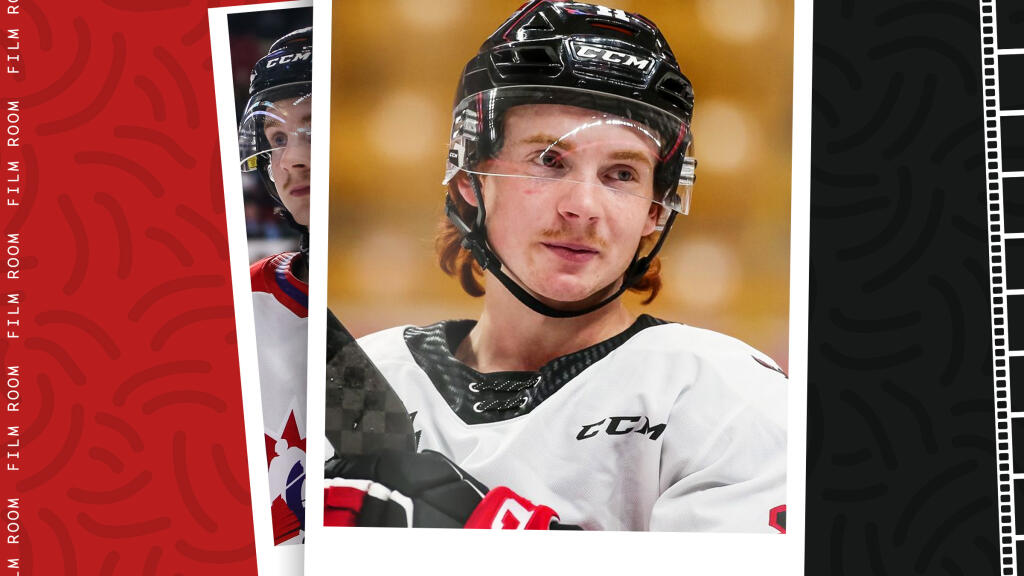